The opening sequences, recorded against scenes of hot weather and including these quotes, left no doubt where the programme was headed:

‘Right now we are facing our greatest threat in thousands of years – climate change.’

‘What we’re doing right now is we’re so rapidly changing the climate, for the first time in the world’s history people can see the impact of climate change.’

‘All of this is happening far faster than many of us thought possible.’

Attenborough shows this graph of global temperature trends, (though omitting satellite temperature measurements which show no increase since 1998). But he fails to explain why temperatures rose sharply in the early 20th century, long before CO2 emissions began to rise significantly. 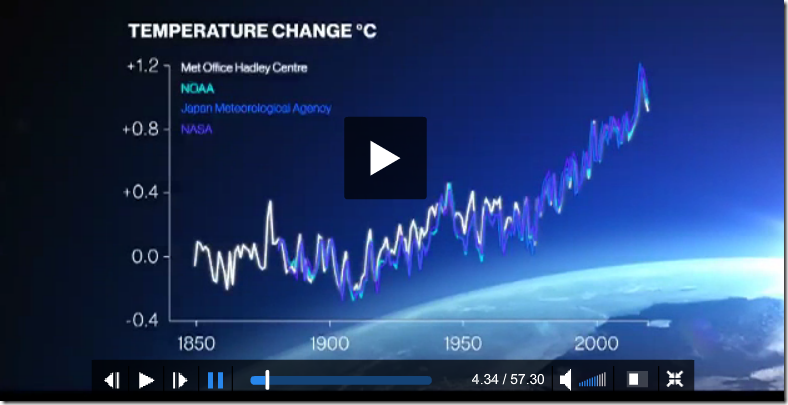 In order to scare people about this small amount of warming, he has to bring out the extreme weather bogeyman.

Peter Stott of Exeter University: ‘It’s having a dramatic effect on our weather.’ ‘The frequency of extreme temperatures is increasing.’

Last summer’s heatwave in the UK is used as an example of climate change, even though it was no hotter than the summer of 1976.

While average summer temperature temperatures may be a bit higher, winters are also milder, so it is not clear why the climate is any worse. Is Oxford’s climate worse than Newcastle’s, just because average temperatures are higher?

As for Stott’s ludicrous assertion that the frequency of extreme temperatures is increasing, milder winters will simply offset hotter summers.

In any event, daily temperature extremes are not increasing, in the UK at least. The hottest day in the Central England Temperature series was 33.2C, set in 1976, and equalled in 1990. No day last summer got anywhere near that.

In fact, there is considerable evidence that heatwaves are becoming less common, at the same time as cold spells are also less frequent. In other words, temperatures are becoming much less extreme. This is certainly the case in the US, as the Federal climate report admitted: 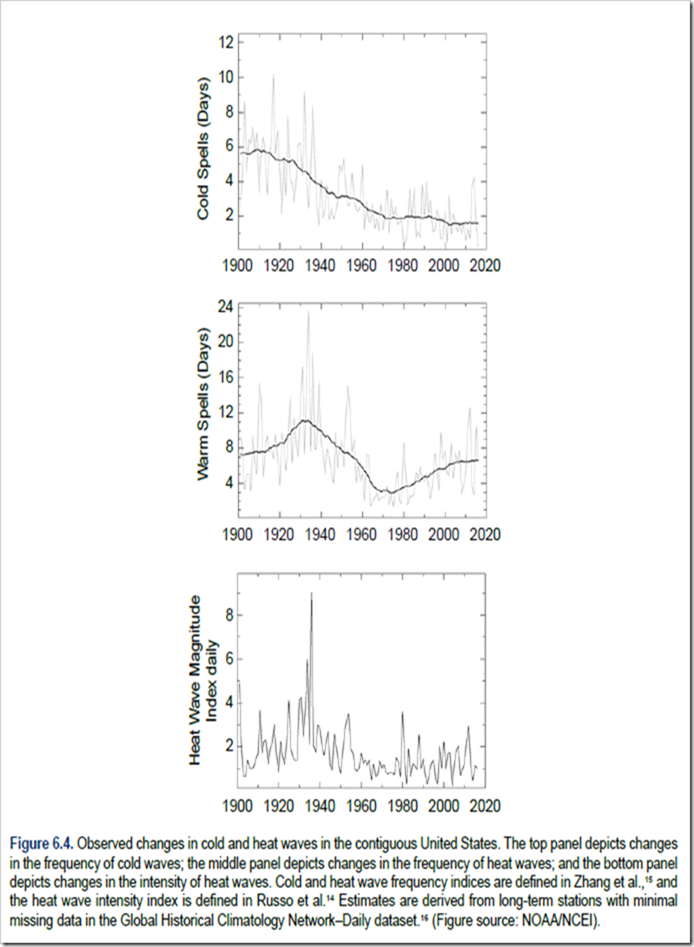 The programme then shows some dead bats in Queensland, killed by a heatwave when temperatures reached 42C. Yet the record for Queensland is 49.5C, set in 1972!

Picking single weather events is meaningless. But this does not stop Attenborough preposterously saying:

‘Animals of all kinds are struggling to adapt to rapidly changing conditions.’

As for droughts, there is no evidence whatsoever that they are getting worse, as the IPCC AR5 admits:

And in the US, as Mann ought to know, rainfall has steadily been increasing since 1900. The calamitous droughts of the 1930s and 50s are a thing of the past: 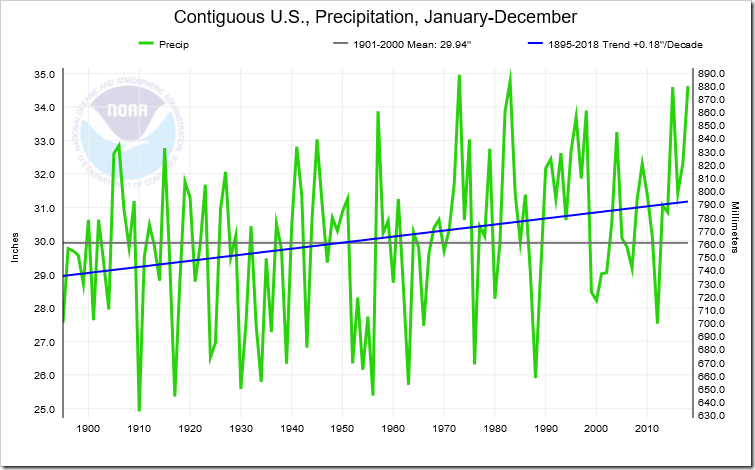 Michael Mann: ‘We’ve seen wildfires break out in Greece, even in the Arctic. We’ve seen a tripling of the extent of wildfire in the western US.’

Naturally global warming is blamed for this.

In fact, experts in this topic are clear that globally wildfires have declined in recent years.

The EU Commission has found the same in Southern Europe:

As for Greece, last summer was not unusually hot, and it was wetter than average, so clearly climate change was not a factor there.

The idea that you don’t get wildfires in the Arctic is also absurd, as Alaska’s history shows. It is dry weather and not heat which is the key factor.

In the US, wildfire acreage was much greater in the past as well. 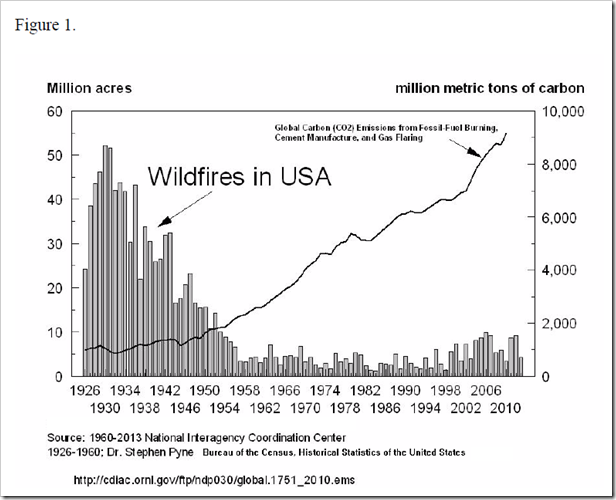 Wildfires Were Much Worse In Past

Forestry experts, which Michael Mann most definitely is not, consistently maintain that the real reason for the severity of recent fires in California is the build-up of undergrowth, dead trees, thickets of small trees, and overcrowded forests generally, all of which act as fuel. This is the result of decades of fire suppression after the war, not climate change.

If droughts are a factor, Mann should be honest enough to admit that California’s climate used to be much drier:

This may be one of the most dishonest parts of the programme. Even the Intergovernmental Panel on Climate Change (IPCC) can’t find any long term trends in tropical cyclone activity or flooding.
And severe tornadoes have become much less common in the US: 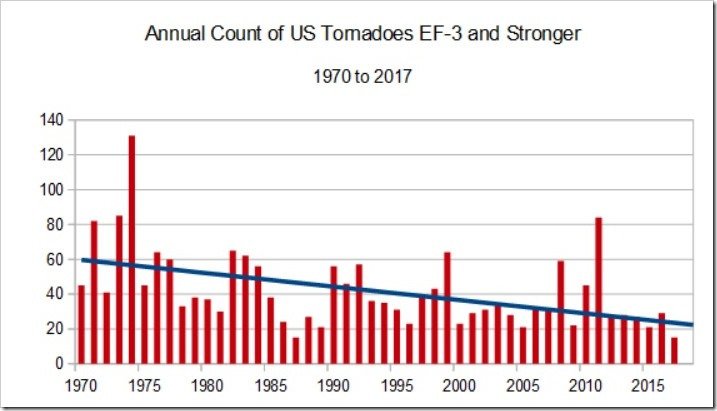 It is claimed that ice loss from Antarctica and Greenland is ‘worse than expected’.

In fact, according to NASA, the Antarctic has actually been gaining ice. It is symptomatic of the whole programme that Attenborough does not mention this inconvenient fact. As for Greenland, I’m not sure that what the experts were ‘expecting’ has any relevance at all. What we do know, though, is that temperatures in Greenland are no higher now than they were in the 1930s. (Another of those ‘inconvenient facts’!): 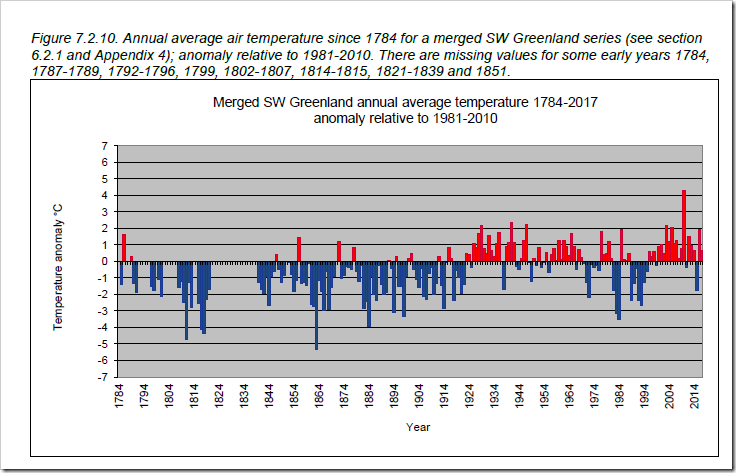 I have certainly never seen this claim before, and it seems pure hyperbole to me.

What is not mentioned though is that sea levels have been rising steadily since the mid 19th century as glaciers started melting at the end of the Little Ice Age. 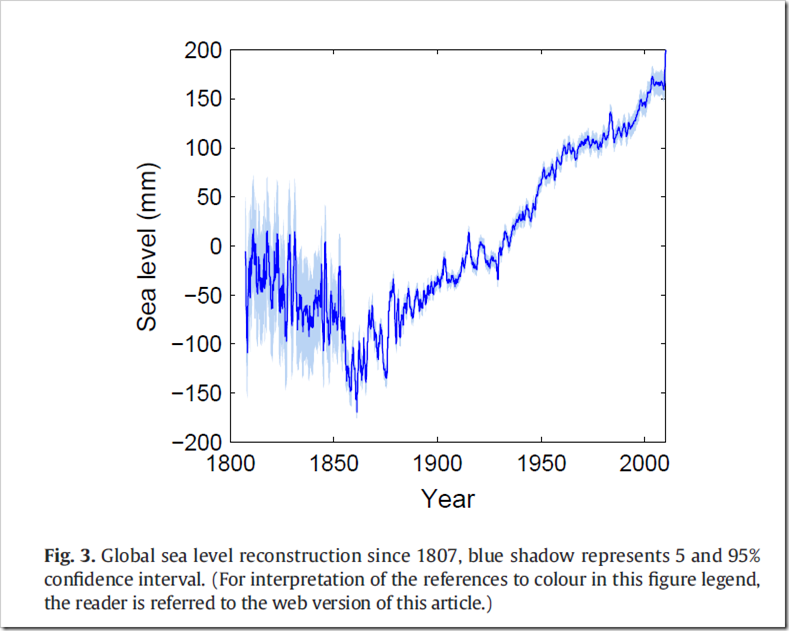 There is no sign of acceleration, and even the IPCC admit that they were rising at the same rate a century ago:

As with some of the other segments of the programme, an emotional piece of film is shown, this time of the tiny Isle de Jean Charles in the Mississippi delta, which is disappearing under the waves.

In fact it has never been more than a few inches above sea level, and most of the problem lies with land subsidence and coastal erosion caused by activities such as dredging of canals and logging.

To equate the problems faced by the isle with general sea level rise elsewhere is utterly dishonest.

Finally Attenborough gets on to corals, and makes this astonishing statement:

‘In the last three years, repeated heat stress has caused a third of the world’s corals to first bleach, and then die.’

There is absolutely no evidence for this, and I have not even seen that claimed about the Great Barrier Reef.

And as we now know, the death of GBR corals was drastically overstated. Indeed, as scientists such as Peter Ridd and local reef experts have long maintained, corals quickly recover from bleaching, which was just as bad in the 18th century.

One of the features of the programme is the insertion of personalised, emotional film sequences – bats dying from heat in Australia, father and son escaping from wildfire in California, and the Isle de Jean Charles.

They are clearly designed to bring home to viewers the real effects of climate change, and make them feel guilty. At one point, the interviewee even says, ‘We have got to do something’.

Unfortunately, the facts don’t agree. Maybe the programme would better have been called Climate Change – The Myths.

This first part of the programme focuses on the effects so far of climate change. In Part II, I will look at what the future holds and what Attenborough tells us we can do about it.

This article first appeared in Not A Lot of People Know That on April 19, 2019, and is republished by kind permission.