NewsPaperthe art of publishing
HomeNewsCommunists, not Americans, are the bad guys, Mr Jones
0

Communists, not Americans, are the bad guys, Mr Jones 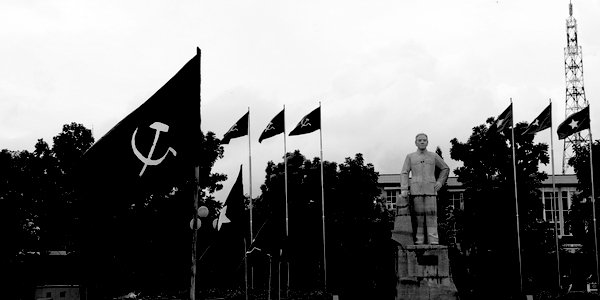 It is a truth universally, but rather quietly, acknowledged that the Left in this country hate the United States of America and all its people. Were the citizens of that great country ethnically homogeneous, this hate would be classified as racism. It is ironic that it is only population diversity that prevents the charge from being accurately laid.

Consider Owen Jones’s article in The Guardian as an example of this blind hatred. This is the key paragraph:

‘That Trump is somehow sullying an office previously held by respectable men of good character is a lie in any case. A succession of presidents have unleashed horror on the world in the last 50 years: backing or orchestrating bloody foreign coups; the slaughter in Vietnam, Laos and Cambodia; the US-backed death squads in Central America whose victims ranged from nuns to leftists; the killing fields of Iraq; the destruction of Libya; the indiscriminate drone strikes.’

Online comments were disabled for his article.

The USA has never ‘unleashed horror’. Jones is wrong. The USA has actually contained the horror unleashed by other countries. Jones has excised so much recent human history as to require a cleaver rather than a scalpel.

The horror being contained was communism. Everywhere communism has seized power, the horror has followed. People have been targeted for having the ‘wrong’ economics or beliefs or saying the ‘wrong’ things. And, unable to defend themselves, they have been murdered, not just by the dozens, not just by the hundreds, but also by the tens or hundreds of thousands, or millions.

The political theory conceived by Karl Marx and promoted by Lenin, Trotsky and Stalin is provably a weapon of mass destruction. It kills, not simultaneously by the brilliant flash of a momentary nuclear furnace, but by one execution or one starved corpse at a time, justified in what a convinced Auden described as ‘conscious acceptance of guilt in the necessary murder‘.

That is the true horror.

Communists remodel society by the physical extermination of anyone who challenges them and the consequent cowering of those too afraid to do so. All Jones is doing is objecting to the violence meted out to communists by people rightfully fearful of not just their own lives, but also for the millions of innocents who would die should the communists take over. These people looked to the USA to help them. Jones just objects to armed communists and their supporters being defeated time and again, and ignores the consequences of communist victories.

Jones complains of the ‘slaughter’ in Indo-China. This slaughter actually took place after the USA withdrew. It was only then that the Vietnamese boat people started leaving their country. While the USA was in South Vietnam, these refugees did not feel any horror.

Genocide in Cambodia started after the communist Khmer Rouge took over by force of arms, murdering four million people in a purge of potential political opponents. It was the absence of the USA that allowed the horror to be unleashed.

There were in effect low-level civil wars going on in South America between governments and Marxist insurgents. Governments had a rightful fear of communism after the massacres in Russia, China, Cambodia, East Germany, Hungary and Czechoslovakia. Their actions might alarm the squeamish, but their opponents believed in the use of ‘necessary murder’ to advance their cause. The governments are responsible for the deaths caused by government forces, not the USA. Note that Jones protests at the deaths of ‘leftists’, and not the innocent targets of leftists.

The ‘killing fields of Iraq’ were the consequence of a civil war. The USA was not responsible for the deaths while this took place. Iraqis chose to kill each other rather than settle their differences peacefully around the conference table. Any student of the history of the Middle East would know that massacres have been a regular feature of politics in a way that in North West Europe and the USA they are not.

It was not the USA that caused the ‘destruction of Libya’, as Jones puts it. The beleaguered dictator, who had lost half his country seemingly overnight, called for the massacre of his unarmed opponents ‘inch by inch, house by house, home by home, alleyway by alleyway, person by person’.

The international community intervened. After the dictator was deposed and killed, the Libyans have, like their counterparts in Iraq, chosen to settle their differences on the battlefield.

Drone strikes are not ‘indiscriminate’. The whole point of the technology is that carpet-bombing of enemy territory to destroy a target is seen as politically unacceptable in an era when entire populations are no longer mobilised by their governments to wage war. Missiles released by drones are precision-guided weapons. But they do still miss; targeting information is inaccurate, or the targets are ‘protected’ by human shields. Jones ignores these facts.

Had it not been for the USA, thinks the Left, then communism would have been triumphant. That is the reason Jones and his ilk dislike the USA. They are the sorest of sore losers.

The West, the Free World, won the Cold War. The Cold War could not be fought directly between the main belligerents lest it escalate out of control, so there were small proxy wars fought mainly in the Third World. The instigators of the violence were always the communists, most blatantly in Vietnam and Korea. The West supported the fight to defeat them. There were casualties. But the right side, the one that did not use genocide as a method of politics, eventually won. Jones cannot get over this.

Share
Facebook
Twitter
WhatsApp
Email
Previous articleShouty Sham never lets facts get in the way
Next articleBBC Watch: Hardline news – who else is on the hitlist?