Corbynistas’ Nazi slurs against Tories do the homeless no favours 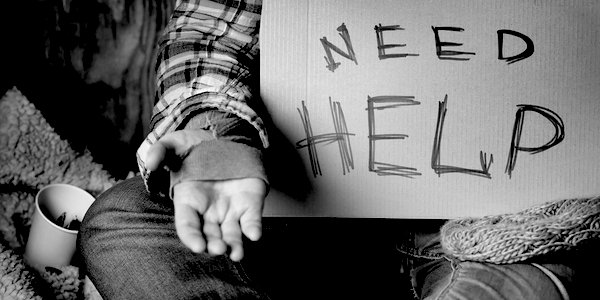 Conservative-run Gloucester Council has brought out posters asking people to think very carefully before giving change to the homeless. These point out that as you walk past, you can’t differentiate between the homeless and professional beggars. You won’t know if your change is going towards food and shelter, or helping to fund someone’s drug or alcohol consumption, or is just being sucked up by petty dishonesty. Instead, Gloucester wants you to show your concern by contacting the homeless outreach team when you see someone you think might be sleeping rough or by giving your money to a recognised charity.

This doesn’t insult the genuinely homeless or deny their existence. It’s simply asking how sure you can be about how your money might be spent and suggesting the best ways to give help. To many who have worked with street people, this is nothing controversial. But not to Gloucester Labour Party, who seem to believe that the council is libelling those who are in need, that the posters aren’t just wrong but part of a disgusting campaign that ‘demonises’ homeless people.

Dig deeper into the conversations Corbynistas have among themselves on social media and you will see even stronger reactions. One member of the Facebook group ‘Supporting Jeremy Corbyn and John McDonnell’ responded by posting a picture of skeletal Nazi concentration camp prisoners, with text telling us that the camps ‘didn’t start with gas chambers’, but with politicians ‘dividing people into us and them’. Then through ‘intolerance and hate speech’ desensitising people so they ‘no longer care and turn a blind eye’. So there you are. When a council asks you to think about the best way to help rough sleepers, it’s the first step on the road to Auschwitz.

You might think that linking an attempt to deal with social problems with Nazi death camps would be seen as going too far. That even if the comrades thought the posters were wrong or clumsy, they would see that making your point with pictures of concentration-camp victims went beyond reasonable debate or decency. That respect for those victims would prevent us from using their memory in such a way. No. There was no rebuke. Quite apart from collecting various ‘likes’ for the picture, it went unremarked among the other comments suggesting that anyone who questioned begging was contemptible and vile.

Addiction and rough sleeping are horrible, intractable problems where generalisations are best avoided. I’ve been a volunteer for a homeless hostel and also worked in central London (in a paid role) dealing with many ex-rough sleepers. I have never been homeless myself, but from what seems like another life, a very long time ago, I spent a couple of years as a user of many the services that street people depend on. I’ve been through some of the same hospital wards, police cells and drying-out units from the wrong side of the desk and sat in the same Soho doorways at 4 in the morning. I’ve met countless homeless, near-homeless and ex-homeless people and I wouldn’t want to demonise anybody. I just want to be realistic. I no longer automatically believe that handing over my bit of money to the guy sitting under the sleeping bag will necessarily mean it gets well spent.

Of course the tragedies are real, the deaths from exposure and neglect. Of course we have a duty to people in desperate circumstances, but will my coins just help maintain someone’s chaotic lifestyle and encourage them to stay in misery? Am I helping pay for a meal or for the next purchase of whatever chemical is slowly killing that person? And if you really believe that a heroin user or street drinker who actually might have a home and financial support would recoil at the idea of posing as homeless to extract loose change from the charitably inclined: well, God bless your innocent trusting heart. This is not about moral judgements. Addiction and the grim life of petty hustling that can go with it make for a miserable existence that deserves compassion. But addiction can shred the better things in your character including your honesty. Ask any ex-addict.

There are plenty of charities who can use your money far more constructively than if you just put it in the next outstretched hand or styrofoam cup on the pavement. Some specialist charities such as Thames Reach are emphatic that any money given to people on the street just helps kill the recipient. I actually think they are a little too certain on this – there are always exceptions. But in general, I keep my change in my pocket unless it’s a collecting tin for a good charity such as the Salvation Army who often take on the cases that many others won’t or simply can’t deal with. And of course, for anyone who really wants to do something, there are plenty of organisations doing excellent work in the field who need volunteers. It’s not just your money that can do good. Your time and interest in people can sometimes be far more valuable.

But never mind these complexities if we can enjoy our moral outrage at the wickedness of those uncaring Tories. The suffering of street people makes a handy weapon to beat them with, and if we can link them to the Nazis, well, that’s even better.