Could Trump find a better running mate than Haley the lionheart? 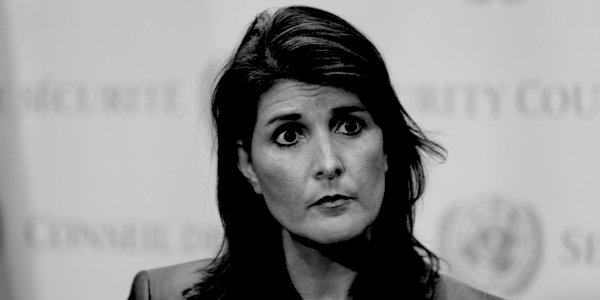 One of the most moral politicians to enter the doors of the duplicitous United Nations resigned from her post last week. As US Ambassador to the UN, Nikki Haley proved to be a revelation amidst the tyrants and Islamists who dominate the organisation.

A politician’s calibre can often be measured by who his or her enemies are. The crowing of Islamists and their Western useful idiots over Haley’s resignation is telling. The Iranian regime is jubilant as they know that the only UN ambassador to stand up to their posturing is gone. Qatari-owned Al Jazeera TV sycophantically praised the UN and laid into Haley.  Referencing Michael Wolff’s controversial book on President Trump, they criticised Haley for being an ambitious woman. This admirable trait is obviously distasteful to the misogynistic Islamists who clamour for power at the UN.

Haley knows that the Islamists are at war with the West and is unafraid to stand up to them. She also knows that the destruction of Israel is part of the Islamist end game. Her refusal to countenance this under her watch is inspiring. Britain’s weak government could learn from her.

A year ago Haley announced that the US would be leaving the anti-Israel Unesco. Two months later she voted against the shameful UN resolution which criticised Trump’s recognition of Jerusalem as Israel’s capital. A now iconic photo shows Haley with her arm stretched up and a grim look of determination on her face. She warned those who attacked Trump’s decision that the US would consequently cut funding to the UN. In a reprehensible display of capitulation to Islamists, and in stark comparison to Haley’s bravery, the UK abstained.

During Haley’s tenure the US left the farcical UN Human Rights Council, chaired by Saudi Arabia and including other human rights abusers. In July Haley revealed that last year the US was the largest funder of the corrupt United Nations Relief and Works Agency (UNRWA) with a contribution of almost £277million. Despite fervent declarations of support for the Palestinians, Iran contributed nothing and Egypt only just over £15,000.

Iran chooses instead to finance Hamas in its jihadist war against the Jewish state. The Islamic world obviously prefers to keep Palestinians as eternal victims and weaponise them in their continual castigation of Israel. After realising that the Palestinian Authority uses international donations to pay the salaries of terrorists who murder Israelis, the US withdrew funding from UNRWA. If only our own government could be courageously ethical as the current US administration is when it comes to Israel.

Haley consistently highlighted the UN’s hypocritical habit of blaming Israel for all the world’s woes while simultaneously ignoring true suffering. She exposed the UN’s Islamist partisanship and questioned Palestinian ‘right of return’ – code for the destruction of Israel.

She fearlessly criticised some of the world’s worst troublemakers. Her composed savagings of Putin and Assad at numerous UN showdowns are wonderful to watch.

So what next for Haley? She has made it clear that she intended to serve only one term at the UN. She says she won’t run for POTUS in 2020 but will campaign for Trump. Unspoken words intrigue me. Will Trump choose her as a running mate for 2020? Haley has not mentioned 2024. Perhaps she will put herself forward as Republican nominee for POTUS then? I certainly hope so.

Her replacement needs to be as outstanding as she is. By tweeting his daughter Ivanka as a possibility, Trump hilariously trolled the post-liberal Puritan media. They worked themselves into a frenzy at the thought of Trump appointing one of his own family members, conveniently ignoring JFK’s penchant for employing his own relatives in similarly sought-after jobs.

Ivanka thankfully ruled herself out. She lacks the experience but there are others touted to replace Haley who don’t. Richard Grenell, US Ambassador to Germany, experienced White House staffer and target of the Left-wing press for lambasting Iran, would be a good choice. Or perhaps Trump will again select a woman, such as philanthropist Nancy Brinker or US Senator Kelly Ayotte. The latter is not a fan of his, but this won’t deter Trump. Haley didn’t support his 2016 Presidential bid yet Trump handed her one of the most powerful American political appointments.

Whoever Trump decides on, his choice will reflect that American politicians are now free to confront Islamists and terror regimes – heartening after years of Barack Obama’s appeasement. During her time at the UN Haley calmly shamed not only Islamists but also cowardly Western leaders. Unless her replacement is as moral and courageous, the UN will continue to stumble along its dark path, to the detriment of us all.