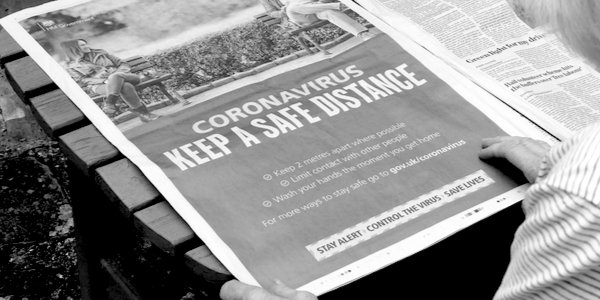 WHOEVER controls the flow of information controls the narrative. I recently looked at the government’s reliance on polling through partners such as YouGov. Today I return to the role of the wider media.

A few months ago I wrote about the government’s Covid-related advertising expenditure. In late spring 2020, all Covid-19 media campaigns were centralised into the Cabinet Office, Michael Gove’s sprawling 8,000-plus strong department. By the end of the year, HM Government had become the country’s largest spender for media advertising. My estimate was a total government outlay on advertising for Covid-related purposes in 2020 of approximately £240million.

For media outlets facing a collapse in advertising revenue because of the closure of the economy, the government spending was a lifeline. Whether the Fourth Estate could objectively report on the government’s handling of the virus whilst simultaneously receiving copious funding from that same government was highly debatable.

Since my article in February, more data has come to light. The Cabinet Office has continued spending heavily on Covid media campaigns, mainly through its media buying partner Manning Gottlieb, laying out just over £87million in the first three months of 2021. This brings its Covid advertising spend to more than £280million between April 2020 and March 2021.

Since the beginning of the coronavirus scare, the Cabinet Office’s outlay on Covid media campaigns has increased steadily, with Q1 21’s figure (£87million) being more than double the amount spent in Q2 20 (£42.6million), and up significantly on both Q3 20 (£71.3million) and Q4 20 (£79.7million). (As noted, it was in Q2 20 that the Cabinet Office began centralising Covid-related media programmes.)

Approximately 88 per cent of the Cabinet Office’s advertising spend is done through Manning Gottlieb, with whom the government has had a close working relationship since awarding the company a £800million media buying services contract in October 2018.

At that time Alex Aiken, Executive Director for Government Communications, stated that the government’s communications team sees such media endeavours as an important way to counter ‘disinformation’ and ‘fake news‘. As anyone with a decent grasp of history will know, it is of course governments who are the regular purveyors of truth and honesty: the Soviet Union’s Pravda (translating as ‘truth’) being a helpful example of such services rendered to the public by the benevolent state.

However, this is only part of the story. After this large contract, Manning Gottlieb were awarded a further three contracts specifically with the Cabinet Office.

The first of these was in November 2018 at a value of £183million: the primary focus of this appears to have been for media campaigns during the transition period following Britain’s exit from the European Union. Nevertheless, with an end date of 31 May 2022, a proportion of these resources were funnelled into Covid-19 media campaigns.

Subsequently, a £119million contract was signed (effective March 2020) purely for the provision of media buying services for Covid-19 related campaigns. This contract was later extended – until either March or August 2021 (the government’s website is unclear) – by a further £229million, bringing this contract to a total value of £348million.

A third contract, effective 1 April 2021, was signed for the same purpose, Covid-19 media campaigns. This contract is extendable until 21 May 2022 and has a maximum value of £320million. Whether it will be expanded in a similar fashion to the previous contract signed with Manning Gottlieb remains to be seen.

Taken together, the three contracts have a value of £851million. As noted, some of this figure was spent before the pandemic on information campaigns surrounding Brexit. Nevertheless, over the last two quarters Covid advertising spending has outweighed Brexit by a factor of about 4:1. To this sum should be added spending from bodies such as Public Health England before the Cabinet Office’s centralisation efforts, which appears to be in the region of £15million, a figure smaller than I previously estimated.

That said, if the most recent contract with Manning Gottlieb was extended in the same way as the previous one (by an additional £229million), there is no reason why the Cabinet Office’s Covid advertising spend could not hit a total of £1billion over the next year to year-and-a-half.

To put such a sum in perspective, £1billion would buy two years’ supply of vitamin D tablets for the entire UK population. To use a more hackneyed analogy, it would pay the starting salary for more than 40,000 nurses in Our NHS.

One element that remains unknown, however, is how much Manning Gottlieb are paid for these services, since their fees are redacted on the Crown Commercial Service’s website. [p.97]

With a pandemic that appears all but finished – oh, but for an entirely unpredictable ‘Indian variant’ – one wonders what the government will do with hundreds of millions of pounds of advertising through to late May next year. One can only presume that it will be used to browbeat the public into accepting a vaccine for which the majority have no need, or for the increasingly probable reimposition of further lockdowns.

The first of these prompts the question: if you are spending hundreds of millions to persuade people to get a vaccine, perhaps it is not all that necessary in the first place. Were the vaccine of an ordinary type and of indisputable value, I dare say no media campaign at all would be necessary: there is little more than their own health that people care about.

That contracts are projected to last at least another year is indeed worrying. Along with councils advertising positions for ‘Covid marshals’ until 2023, one wonders if the government already has plans for further infringements on our liberties, the timeframe for which has been built into contracts such those as agreed with Manning Gottlieb. Given the backtracking, twisting and turning that has been displayed to date, it would not appear unlikely.

With a remit to purchase advertising across all media types, companies such as Manning Gottlieb are central to the dissemination of information in the public sphere. It remains an open question whether, while receiving  central funds important to their survival, the media will be able or willing to scrutinise government policy, both in the realms of further lockdowns and of the constant bombardment of vaccine propaganda.

The track record so far shows that the vast majority of the media is both unable and unwilling to ask difficult questions surrounding the government’s handling of the pandemic. With hundreds of millions of pounds sloshing around over the next few years, don’t expect that to change any time soon.