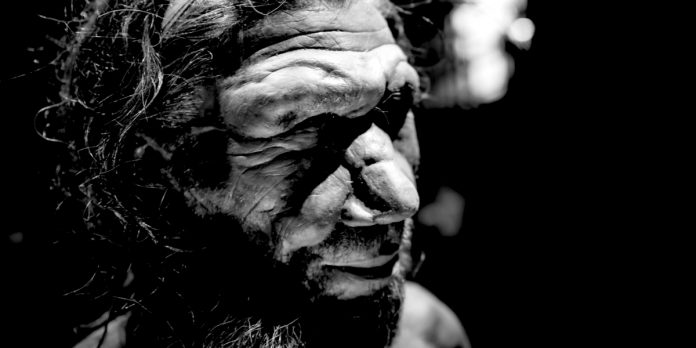 IF Boris Johnson fears retribution for the Covid pandemic shambles, he need worry no longer.

Out of the mists of prehistory an alternative scapegoat has emerged . . . a Neanderthal, one of the human sub-species who were roaming Europe around 60,000 years ago.

According to Professor James Davies, an Oxford University genome expert, a single romantic liaison between a Neanderthal (Homo neanderthalensis) and a human (Homo sapiens) led to many of us in modern times becoming more susceptible to coronavirus.

This is because the Neanderthal passed on a gene to the human which helps develop a protein on lung cells. Covid is able to latch on to this protein, enabling it to spread more easily throughout the lungs.

‘If the dinner date between the human and the Neanderthal had gone wrong, we would have had a much better time in Covid, and had hundreds of thousands fewer deaths,’ Professor Davies told the Cheltenham Science Festival.

Well, that’s bad news for humanity, but a boost for Johnson (Homo lameduckeus). When he’s hauled up before the eventual public inquiry, he can simply say: ‘The pandemic was nothing to do with me, your honour. It was that loved-up Neanderthal back in the Stone Age.’

In fact, in the wake of last Monday’s devastating confidence vote, the discovery could bring a whole new raft of historic blame-shifting by our dissembling PM, including . . .

Partygate: ‘The ancient Egyptians invented beer 12,000 years ago. If King Tut could enjoy a tipple, who am I to refuse a glass or two?’

The economy: ‘You’ve got to understand that we’re still dealing with the fallout from the South Sea Bubble of 1720.’

The health service: ‘All was well when leeches and trepanning were treatments in the Middle Ages. Medicine’s got too complicated since then.’

Wallpapergate: ‘Well, people had to cover their walls with something after the Puritans tore down tapestries during the Civil War in the 1640s.’

Fuel prices: ‘If you think it’s bad today, I can remember when petrol went up from 30p to 50p a gallon during the 1973 Arab oil embargo. Just think, that was a whopping £6 to fill your tank.’

Brexit: ‘Eight thousand years ago, Britain was joined to the Continent by a land bridge, but it was inundated by the North Sea. That shows even God wanted us out of Europe.’

Train chaos: ‘Trouble started when the Rocket won the Rainhill Trials in 1829 and George Stephenson got ideas above his railway station.’

Airport delays: ‘The Wright Brothers should have stuck to building bicycles in 1903.’

Climate change: ‘It’s never been the same since Man discovered fire 400,000 years ago. I blame that bloody Neanderthal.’