Covid Halloween – the zombies are coming for us 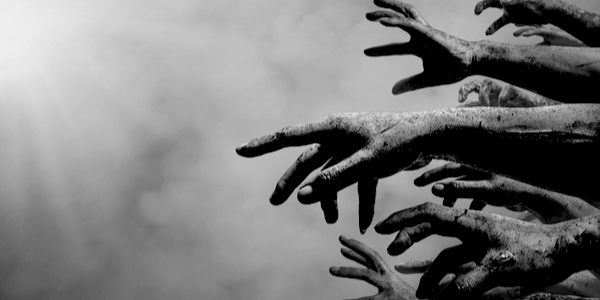 A 900-year-old sword presumed to have been used by a crusader has been found off the coast of Israel. It is more than 3ft long and made of solid iron. Just imagine the physical strength of that knight who wielded such a heavy weapon, especially considering people had less to eat then.

I recently watched on Netflix the film Ophelia, which has its fair share of medieval damsels, castle turrets and sword-fighting. It’s a retelling of Hamlet and shares the tribulations of Shakespeare’s most famous madwoman. Since the Covid crisis hit I have similarly felt as if I am losing my mind on a daily basis. Initially waking up in the spring of 2020 to the ghastly fear that a pestilence had descended on humanity and worrying about whether there would be sufficient loo roll, this was followed by the news that I would not be able to leave my one-bedroom flat. All of it has taken a toll on my mental health.

The impact is still pronounced as I now experience frequent residual nightmares involving such horrors as a zombie apocalypse, strange furry animals chasing me and bizarre encounters with ghostly beings who are desperately trying to communicate something.

My more spiritual friends inform me that this is due to a macabre energy generated from hexes cast by witches this time of year as Halloween approaches. But scarier prospects loom. We look on with dread as the goblin-like Sajid Javid threatens to spoil this Christmas. Chris Whitty’s bug-eyed alien face haunts our televisions and computer monitors whilst the ghoulish Tony Blair says that vaccination is our ‘civic duty’. (Incidentally, I am not the only one dubbing Mr Blair a ghoul these days.)

It is all very monstrous, and faced with the spectre of another lockdown everyone seems to be going out as much as possible. Besides house parties there are random free gatherings in clubs with fancy-dress themes; I am thinking of going as a medieval wench (in search of a brave knight) rather than recycling my Little Red Riding Hood/Big Bad Wolf costume from before Lockdown II. Remember that one – announced on Halloween 2020 to take effect on Guy Fawkes day? The Regime does have a particularly twisted sense of timing.

The Government is drawing up strategies for dealing with the plague this autumn and winter, including Plans A and B and a murky (despite denials) Plan C.

Plan B would entail ‘circuit breaker’ or regional lockdowns, mask mandates again, and vaccine passports for mass gatherings presumably including large parties and sporting events. Essentially, almost anywhere that’s fun where you might meet someone you fancy.

It is difficult to contemplate the horrors that a Plan C would involve. Perhaps there are even Plans D, E and F. If my suspicions are correct, what we are really only able to see from the outside of this state of affairs conceals a rotten, corrupt and grossly misshapen gourd whose insides are putrid and festering with deeply sinister motives.

Not to get too metaphysical but I’d like to think this Government do not know who they are dealing with. If they really think that the British people are going to sit at home and do whatever they are told this winter, they have another think coming. Everyone who is anyone is saying they will not comply with any further Covid mandates. Here’s Dan Wootton telling the Government to take their Plan C and shove it.

It is our duty as citizens to draw on a spirit of rebellion and dissidence in such times. We should take inspiration from teen rebel movies such as The Breakfast Club, where with the classic line ‘Eat my shorts’ Judd Nelson refuses to obey his sadistic teacher.

We absolutely cannot afford to comply with any future Covid mandates because everything is at stake. Meet, greet, eat, drink and be merry. Ignore the clowns in Parliament, Downing Street, the geeks at Sage and the freaks walking around in face coverings.

Refuse to wear a mask unless it’s a Halloween or Venetian one, the scarier the better. Then you can laugh at the fearmongers and say, ‘Boo, eat my shorts!’