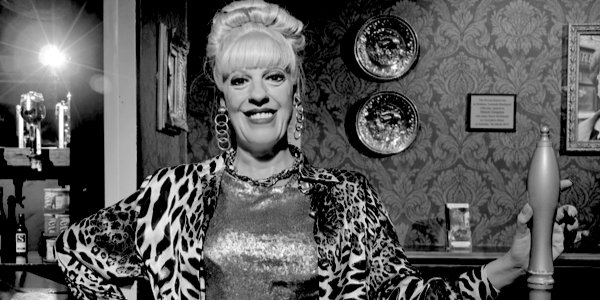 –  ‘Yes, you’ve mentioned it before, grandad. Now pull up your visor and eat your coldpot.’

– ‘There’s no electric for cooking. The solar panels are covered in bird muck and cat poo again.’

‘Couldn’t you warm up my dinner on the radiator?’

– ‘No. The communal ground source heat pump in Rosamund Street has packed in. Thrown-away face masks have blocked the U-bend.’

‘What about the wind turbine on the Red Rec?’

–  ‘Some kids have pulled it on its side and are using it as a roundabout.’

‘Right, I’m off to the Rovers. I’ll get summat to eat there.’

– ‘I know. But it’s no use you trying to go to the Rovers because it closed in 2025 when the Covid cops ruled that a meat and potato pie wasn’t a substantial meal.’

– ‘There’s no chance of that. The brewery’s been converted to making hand sanitiser. The Rovers has been demolished and turned into an electric car charging station.’

‘But none of us can afford cars these days. Mind you, it was always a bit dicey driving my old Peugeot diesel over them cobbles when it was wet.’

‘No, diesel. They told us in school that it’s a swear word. Anyhow, the cobbles have gone, granddad. They dug them up in 2050 when they got the HS2 route plans upside down.’

‘Isn’t that bloody railway finished yet?’

– ‘No, but the Prime Minister for Life says next year, definitely. As soon as a Brexit trade deal is agreed.’

‘God, she’s got a nerve, that Carrie Symonds. Why doesn’t she retire? She’s older than me.’

– ‘Quiet, grandad! That’s ageism and sexism. You’ll get yourself arrested. Anyhow, I think the heat pump’s come on again – I can head a whirring sound.’