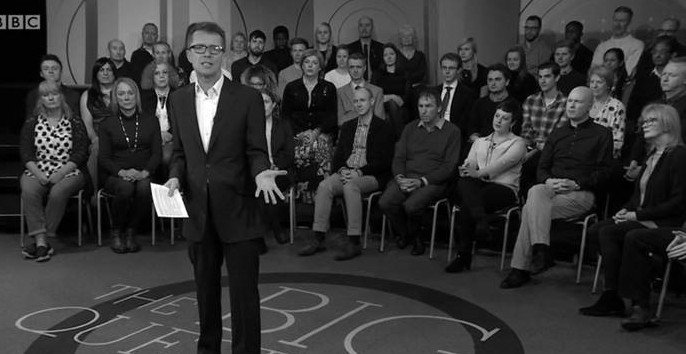 Yesterday, TCW’s co-editor Kathy Gyngell was on the BBC’s The Big Questions, hosted by Nicky Campbell. She held her own against a PC audience and a constantly interrupting host, but notable was the disrespect accorded by Campbell to her fellow socially conservative panelist Dr Peter Saunders (Christian Medical Fellowship and a writer for TCW on medical ethical issues) by Campbell.

Here is Craig Byers’s take on the show, originally published on Is the BBC biased?

The ‘big questions’ on Sunday morning’s bad-for-your-blood-pressure edition of The Big Questions were framed as follows by Nicky Campbell:

1) This week there’s been more protesting against President Trump – this time over his new immigration policies for people entering America from seven mainly Muslim nations. But Britain’s moral high ground looks pretty shaky. Last week a report by the Home Affairs Select Committee slammed the quality of accommodation used to house many asylum seekers in the UK as “a disgrace” and “shameful”. Filthy, vermin-infested conditions, inadequate support for vulnerable people, contractors housing far more people than they are funded for and asylum claimants being concentrated in a small number of highly deprived areas while richer towns and cities took very few. Can Britain be proud of its treatment of asylum seekers?

2) And this year it has been the transgender cases that have been hitting the headlines. Last week, a High Court judge decided that the wife and children of a man who was now living as a woman should no longer have contact with their father in case they were excluded from their strictly orthodox Jewish community. And another woman transitioning to be a man decided to have a baby before continuing with her sex change but objected to being called a mother by the nurses. Others have faced problems when placed in male or female prisons midway through their transitioning process. And on Friday, Russell Brand declared that he wouldn’t be “forcing gender” on his baby daughter, Mabel. Should we have the right to decide our own gender? Of course, the very verb is contentious. It is not a decision for some people. It is absolutely what they are, it is escaping from what they are.

3) On Friday, the MP Dan Jarvis hoped that his private member’s Bill would change the Government’s approach to child poverty. It ran out of time, at least for now, which is unfortunateas the number of children living in poverty is already rising and predicted to rise even more. According to the respected Institute for Fiscal Studies, the percentage of children living in officially declared poverty in the UK will rise from 14.9 per cent to 18.3 per cent in the decade 2010 to 2020. Relative child poverty, that’s the number of children living in households with an income less than 60 per cent of median earnings, will also rise over the same period from 17.5 per cent to 25.7 per cent. These changes would reverse all the improvements made to levels of child poverty in the previous decade. But critics say the bold figures obscure a more complex picture. Will more children be raised in poverty?

All were put from a Left-liberal standpoint.

(Some people – namely me – might think it sounded rather to much like a party political broadcast for the previous Labour government (and Dan Jarvis)).

If the questions were typical of the BBC, then so was the studio audience.

At one point Kathy Gyngell told the TBQ audience, “It’s very easy to virtue signal”, and asked, “How many people here would take in a male economic migrant for an indefinite period?”

Nicky Campbell, seizing the moment, dramatically spun on his heels and asked the audience that very question.

Being a BBC studio audience, the majority of them raised their hands. A mere smattering of hands went up when Nicky asked them who wouldn’t take such a person in.

Nicky said that showed what a compassionate audience it was.

When Kathy and Dan Hannan forced a third question on them, “And how many of you have taken in a migrant or a refugee?” only one hand went up (a pro-refugee charity worker).

Says it all really.

I know that Nicky Campbell has his fans, but I can’t say that I find he makes for pleasant viewing at times.

Or that he’s even-handed.

His treatment of Peter Saunders from the socially conservative Christian Medical Fellowship during the transgender discussion, for example, was strikingly different to his treatment of the socially-liberal voices ranged against Mr Sanders (meaning, strikingly less respectful). Nicky’s first interruption, “Please just answer the question”, came literally just seconds after his first answer – and, though he was then allowed to speak, Nicky’s evident disdain for his views didn’t seem to diminish.

Craig Byers
Craig Byers is a blogger about the BBC, focusing on the issue of BBC bias while living in Britain's finest traditional seaside resort: Morecambe (the one with the Eric Morecambe statue).