NewsPaperthe art of publishing
HomeNewsCrime going down? The real figures prove the opposite
45

Crime going down? The real figures prove the opposite

I keep hearing the government assuring me that crime is going down, especially the Prime Minister at PMQs. And it’s been going on for ages.

But recently an angry woman lashed out at London Mayor Sadiq Khan over shut-down police stations and no bobbies on her streets: ‘Our communities don’t feel safe.’ At the same time, London has become the ‘Murder Capital’ with the revelation that its murder rates had overtaken those of New York City. UK prisons are overflowing. In October 2017, the jail population stood at 85,375, but despite a slight decrease from 2010 according the the House of Commons Briefing paper Number SN/SG/04334, 20 April 2017,  prisoners serving sentences for robbery, burglary and public order offences are to be released early, under a ‘home detention curfew’, to alleviate serious overcrowding.

And yet – thanks to the perceived ‘falling crime rate’ dividend, police budgets continue to be cut. The Police Inspectorate confirmed that all forces in England and Wales will spend £12.3billion in 2017/18, but this is projected to fall by 6 per cent to £11.6billion by 2020/21.

OK, if crime is actually down, fair enough. But is it really? And if not, what is going on?

According to the Mises Institute, not only is the crime rate in the UK not going down, the perception that it is has been based entirely on a change in methodology in the compilation of crime statistics. Indeed, the institute quotes a 2007 study by Pease and Farrell, which estimated that the reporting of violent crime in the UK underestimated reality by as much as 82 per cent, with the real number of victims closer to 4.4million than the 2.4million officially reported.

There are several elements to their analysis. As Neema Parvini explains in the Mises report, the Blair government’s platform ‘Tough on crime, tough on the causes of crime’ didn’t seem to square up with the empirical evidence coming in that the crime agenda was not actually fulfilling their promises. The solution? They changed the way crime was to be reported, by introducing the National Crime Recording Standard (NCRS). This saw to it that instead of using actual figures from arrests and convictions as supplied by the police, from 2003 onwards official data would be derived from the British Crime Survey – an estimate of crime figures, based on a survey of 50,000 people over the age of 16.

This meant that a huge number of crimes were now omitted from the data, for example offences against or by the under-16s; so-called ‘victimless’ crimes such as fraud and online offences; even shoplifting. And because of this change, statistics could not be compared with figures from 2002 or before. This all leads to the conclusion that real crime rates have become a matter for debate and opinion rather than hard evidence. Parvini suggests that this is perhaps the very first example (long before Putin or Trump) of ‘Fake News’.

But the real data does exist, even if it is extremely difficult to access. In the Mises study, it is shown that violent crime convictions from 1997 to 2008 increased by more than ten times population growth: 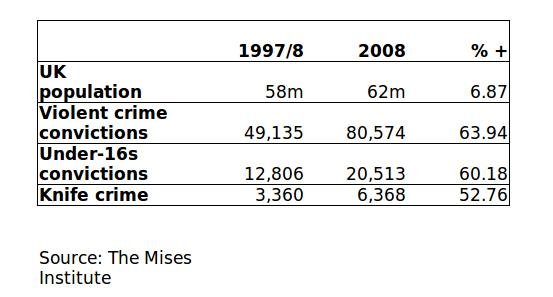 Neither can the figures be attributed to falling police numbers, according to Peter Hitchens. He reveals the increase in police numbers from 1911 to 2009 as 181.92 per cent, compared with an increase in total population of only 71.86 per cent.

So – declining crime rates? In my native Scotland, this is known as a ‘right pauchle’.

As long as government deludes the electorate that crime is falling, policy decisions will never be able to plan and execute effective measures to deal with real crime. And without an urgent and effective response, these problems will continue, attract more of the same, and spiral rapidly out of control.

The first thing the government needs to do is ditch this spurious concept of estimated data and base policy, planning and resource allocation on the real numbers. We don’t need fake statistics, and neither does the Home Office. Government needs to admit – as everyone at street level can plainly see – that society in the UK is getting more violent, more disorderly and less safe. Frenzied knifings, acid attacks, moped robbery, violent daylight break-ins – these are not fake crimes. And a fake-based response is worse than useless.