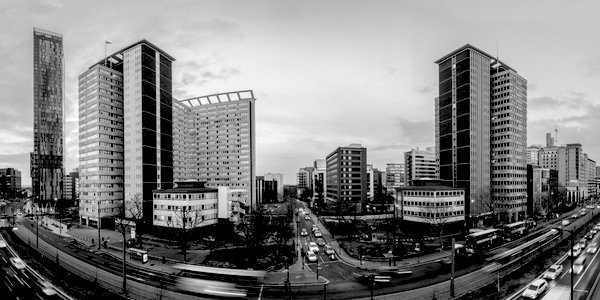 They’re jealous because Croydon consistently sets the agenda for the world.

All gifts to the world that the Condescenti sneered at initially, only to adopt them wholesale.

There are many more examples I could list, but brevity is the watchword in these blogs. Besides, it’s not attractive to boast.

Now Croydon is once again being cast as the Wicked Witch of the West. The excuse this time? The relaxation of planning laws that could lead to a ‘Croydonisation’ of the rest of the country.

Actually, on this one, the Media Munchkins might have a point.

Much as I want to defend my home town, no man has ever woken up at East Croydon station and mistaken it for the Garden of Eden.

Like many over-achievers, Croydon is driven by a tragic lack of self-esteem. It was a late addition to a big London family of suburbs, and feels unloved.

Sadly, in a bid to get attention, Croydon has been planting skyscrapers since the 1970s.

Which would be fine if each building was an example of modern architecture. I could handle a Gherkin or even a Shard. But every tower block in Croydon looks like a data centre with windows. The Thrupenny Bit building is as exciting as it’s ever got in five decades.

They don’t need to make beautiful buildings or inspiring environments. They won’t be living here.

Why? Because once planning permission is sorted, nobody really has to try. Aesthetics and architecture are words to be skipped past on the long journey to Return on Investment.

So with no restraints, they’ll pour quick-drying concrete over everyone’s dreams.

Now everybody’s at it. Longtime residents of my new home, Kingston, are up in arms about the town becoming ‘Croydon on Thames’ because a few 22-storey tower blocks are being mooted for Eden Street. They’ve got a point though. These are the architectural equivalent of Japanese knotweed.

Once established, they will suck all the life out of the rest of the delicate ecosystem. The cattle market will soon be another tower block build on top of boarded-up shops and an empty gym.

That really would be tragic because Kingston is a market town. It doesn’t feel like you’re in London – until you get your council tax bill – and it was only sucked into the metropolis as it expanded.

The same is happening in Richmond, just up the river, which is London’s only other unspoilt borough. They want to start there by putting two-storey extensions on top of two-storey terraces. The cobbled streets will be the first to go, mashed to pieces by skips and aggregate deliveries.

This is going to happen all over the country. Croydon gave the nation Kate Moss. Now we’re giving you the architectural version of Japanese knotweed.

What are we going to do?