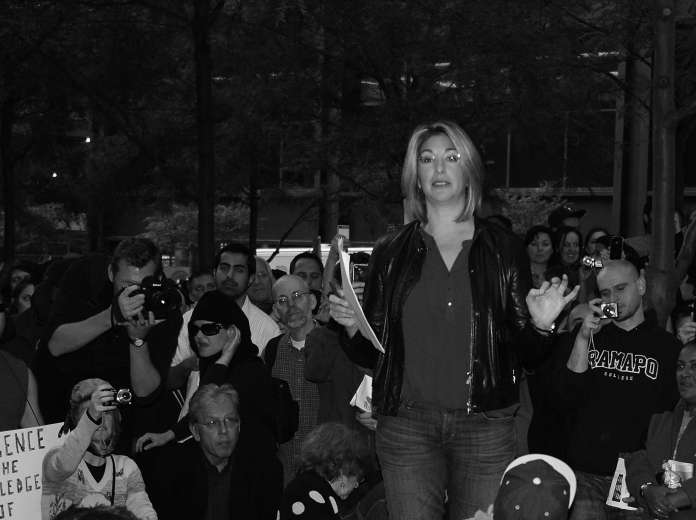 Naomi Klein is not just a Leftie, she’s an extreme, I-am-right Leftie: her central hypothesis in her latest book is that the only way of dealing with climate change is to smash capitalism and replace it with a world government that puts an immediate end to any manufacturing or heating process  that uses fossil fuels.

How that will help Britain’s  and the world’s poor, whose main problem is that they don’t have access to cheap fossil fuel for cooking and keeping warm (which is why, very pragmatically, India and China are building record numbers of coal-fired power stations)  defeats me; but then, I am not an ardent anti-capitalist.

As a political dogma or script, Ms Klein’s approach could be taken straight from the agenda of that lovable triumvirate of communists, Lenin, Mao and Stalin, who between them, in pursuit of their anti-capitalist goals, murdered probably 60 million of their fellow countrymen.

Such eco- fanaticism, incidentally, was also a cornerstone of National Socialism in Germany, as this website intriguingly shows; we all know where that led.

The BBC, of course, loves such views: indeed, as I have written before, they are an Article of Faith of the Trustees.  The diktat from Ms Alison Hastings (in charge of what are called ‘editorial standards’)  is that those who disagree with climate change alarmism shall only very rarely appear on the airwaves – and if they do, they will be made to look as ridiculous and idiotic as possible.

It comes as no surprise therefore that the said Ms Klein – though not an expert on weather or the climate , but rather a self-declared ‘political activist’ whose main purpose is to foist her views on the rest of humanity – made a raft of red-carpet appearances on BBC programmes last week.

The Beeb’s love affair with Ms Klein began back as long ago as 2000, when she was granted her own BBC fact-file lauding her anti-corporatism. .

Back in the present, she was given more or less unchallenged airtime to plug her book and expound her  views that We Are All Going To Die unless we accept what she says.

There is not the space here to chronicle just how jaw-droppingly biased and fawning in her favour these appearances – on Start The Week, Women’s Hour and more – were, but I will focus on just one, on Sunday morning’s BBC1 so-called religious programme last weekend.It gives a good flavour of the rest.

This magazine slot long ago became – in keeping with the BBC’s parallel multicultural, right-on, multi-faith agenda – a forum where almost anyone but Christians can peddle their views and their (usually) anti-Christian prejudices. Ms Klein thus fitted perfectly with its format and she did not disappoint.

With her on the couch was another climate change activist, the so-called comedian Kate Smurthwaite, a fellow self-declared  and self-regarding political activist who, as well as pursuing climate alarmism,  says she is a ‘feminist’ and, it seems,  believes that as many abortions as possible should be performed.  The third guest was an affable former Dominican Friar who also happened to believe that there is no doubt that we are all going to fry for our Climate Sins.

The line up was completed by the radio presenter Nick Ferrari, who, it quickly became clear was a Non-Believer in the alarmism and therefore became a target for vicious ridicule.

What followed was wholly predictable. Mr Ferrari dared to say at one point that he thought re-cycling was not essential.  Within seconds he was howled down and talked over by the gurning Ms Smurthwaite, who for good measure also told him how dangerous and nasty his ideas were.

Ms Klein, of course, had a totally easy ride to plug her book. Presenter Sian Williams simply let her spout her alarmist, anti-capitalist propaganda, and then acted as ring-mistress as the Friar and the Gurner weighed in with how very right she was.

To make sure the point that Ms Klein was right and Mr Ferrari was wrong was totally beyond doubt, half way through the sequence, there was an outside contribution from a monkey sanctuary in the Midlands. Here two eco-activist women pressed home – completely without challenge – how very wrong it was to disbelieve in the BBC’s and Ms Klein’s views about alarmism.

And there we had it: another week, another piece of BBC agitprop, with Ms Klein the totally honoured and garlanded guest. It defies belief how nakedly biased these programmes actually are, and the extent that the BBC will go to ensure those whose beliefs it admires are given the space to plug their wares.