NewsPaperthe art of publishing
HomeNewsDavid Keighley: How the BBC ganged up to smear Ukip
80

David Keighley: How the BBC ganged up to smear Ukip 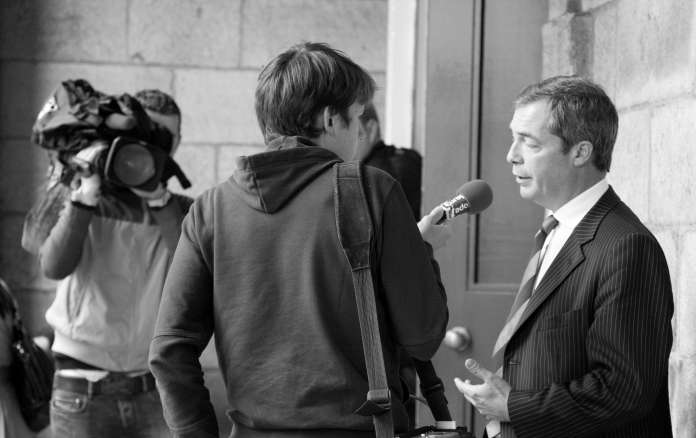 His message – delivered in his trademark pugilistic style without a scrap of supportive evidence to BBC-loving  chums at a media conference –  was exactly in line with that  from senior BBC figures on such occasions: ‘Move along there, nothing to see. We did brilliantly. We got complaints from everyone and that proves we were unbiased’.

You can read his full speech here on the News-watch website.  The key underpinnings are flawed logic and bombast.  And while claiming the Corporation welcomes ‘criticism’, he dismisses out of hand all complaints from politicians because they were based on blatant and risible self-interest.

Harding  says that, though astonished by the ferocity of complaints, he looked at each on its merit. Every word of his speech suggests otherwise.  He claims to believe that his dismissal of the criticism is not based on such simple metrics, but nothing in his speech suggests that more subtle techniques of analysis were used.

Ukip, he claims, were worried that they were being ‘shut out by the establishment’.  Pardon? That’s an exercise in smoke and mirrors.

The main problem about BBC’s coverage of Ukip was not that they were ‘shut out’, but rather that almost every interview, such as this by Mishal Husain on Today, was ‘painting by numbers’. The main intent was to portray the party as basically as racist, air-headed thugs, exactly in line with what BBC interviewers have been doing for years.

Another major issue was that when Nigel Farage appeared on the BBC-staged challengers’ debate, the audience was packed with people whose main objective was hurl abuse at him. The panel itself was allowed to shout him down by force of numbers.  Further, no question was asked of the candidates about the EU, the primary issue that distinguished Ukip from all the other parties represented.

A third – linked to the challengers’ debate -was gross bias by omission. Coverage of the EU as an election theme disappeared almost to vanishing point. The main parties might not want to have talked about the subject, but it was the BBC’s job to be proactive on this front and they were not.

Harding’s main argument, however, raises even more concerns. He suggests that the British people voted for a Conservative government, and therefore, any idea that any element of BBC output was skewed to the left can be dismissed.

Here, there is so much wrong with his logic and assumptions that it is almost impossible to know where to start unpicking them.

Point one:  How could he possibly know what persuaded the voters who actually voted ‘Conservative’ to do so?   It seems, however, that he thinks the BBC’s coverage had some role in the party’s success.  He provides no evidence for his argument, so it would be interesting to know on what this is based.

If Harding believes this, it surely also means that the BBC had some role in dissuading people to plump for other parties?

Point two:  His logic does not actually stand up to scrutiny. He has set up a false Aunt Sally. The speech provides no hard evidence that the BBC was not biased against the Conservative party. So it is equally possible to argue that the biased coverage may have led to a reduction in the Conservative (and Ukip) vote. In contrast to Harding, abundant evidence has been provided on The Conservative Woman and News-watch that indeed it did.

Point three: Harding makes several admissions in his speech that there were mistakes in coverage, for example a disproportionate focus on a hung result and the need for a coalition.  Yet he immediately claims – again without providing a shred of evidence – that this has not affected impartiality.

The question here is, how does he know?  It looks to be another default assumption that what the BBC does is right, even when it gets things wrong. The reality is that unpicking issues of bias is often a slow and painstaking operation of sifting through the transcripts of what was actually said. If he has got that evidence, he should declare it and let others decide. Instead – as usual – the Corporation is its own judge and jury.

There are other massive holes in his polemic but there is not the space here to go into all of them. Suffice it to say that the main substance of his defence evaporates as soon as it is scrutinised.

Perhaps the greatest bias of all was in his assertion that this was a Conservative victory.  Clearly, from the BBC perspective, it was.

But for those who believe in genuine social justice and that that leaving the EU is vital to restore British independence, the General Election was an exercise only in illusory choice. Harding, with his own particular brand of Corporation bluster, shows that the BBC is a million miles away from understanding that, or giving credence to the issues involved.