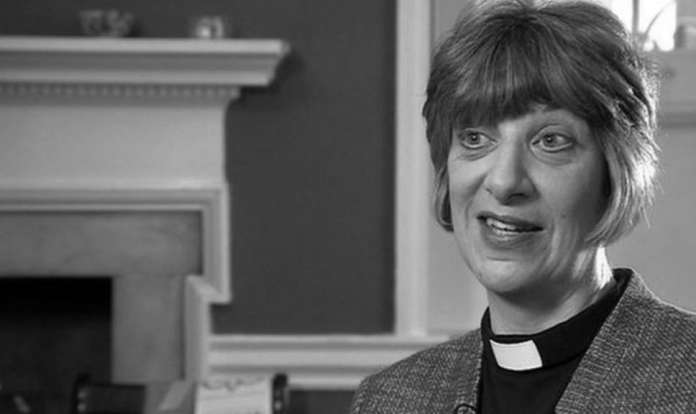 The Rt Reverend Rachel Treweek is Britain’s most senior female bishop – in charge of the Gloucester see – and the first female lord spiritual to sit in the House of Lords. She is, therefore, arguably the most important woman in the established Church and is clearly on the rise with multiple agendas.

Not many of them are directly to do with her faith, however.

She told the Guardian a few weeks back that she wants God to be thought of as either he or she;  she wants the church to pursue a multicultural and equal-gender approach (there are, of course, far too many ‘loud and domineering’ men in  the Church); she wants ‘social justice’ for refugees, and many more of them to be accommodated.

Her over-arching approach to her new ministry? To ‘shake up’ what has hitherto been a ‘male, middle-aged’ role. Watch out, you old fogeys of Gloucester!

Her Grace is also apparently – like so many of her fellow clergy – a fully paid up member of the church of climate alarmism. As the COP21 talks in Paris opened, she tweeted reverentially to her new flock:

‘As pilgrims head for Paris for climate change talks, may we be yet more aware of our wounded earth and broken humanity. Lord have mercy.’

The right-on Lord Treweek, as a member of the House of Lords, can no longer vote in Parliamentary elections, but it is not hard to imagine which way she did so before her elevation. It certainly was not for Ukip.

She has this week taken up another cudgel. In her sights now, for a seasonal bah! humbug attack, though, is a much tougher nut to crack. It’s the BBC.

Her Grace’s beef with the Corporation is that it is not Christian enough. She has complained that there are only four hours of new Christian programmes over the Christmas period.

In her diocesan Christmas message, she declares that she found the Corporation’s ‘scant’ religious television offering ‘offensive’ and claimed that scheduling decisions were ‘presumably taken in order to reduce the possibility of offending people with too much God stuff over the holiday’.

Well golly gosh. In fact, the BBC’s religious programmes have halved as a proportion of the total output over the past thirty years, and religious coverage is now, of course, headed by Muslim Aaqil Ahmad, who has stated that Christianity – despite it being the established religion of this country – will be treated no differently from any other.

That, of course, is an outright porkie. Christianity – unlike Mr Ahmad’s own religion – has been subjected to years of full-scale assault from its enemies on the BBC airwaves, especially from followers of the LGBT agenda – as the attacks against Tyson Fury have shown this week.

Newsreader Clive Myrie was the house spokesman for the Corporation’s main onslaught. With all the elegance of a jackhammer, he called the boxer a ‘dickhead’ for daring to say that Christianity had concerns about homosexuality and paedophiles.

Comedians who appear on BBC programmes from Have I Got News For You to the Now Show on Radio 4 lampoon the Church itself and Christians in general mercilessly; and those who present factual science programmes treat the idea of God as a mental illness worse than schizophrenia.

Her Grace is thus protesting well after the horse has bolted. She could always complain, of course, but the BBC complaints process is so rotten to the core and self-serving that she would not stand a cat in hell’s chance of success.
The other side of this coin is that figures from the Church of England such as the Lord Treweek and Thought for the Day presenter the Reverend Giles Fraser, (who believes that Christianity should adopt a jihadi-style approach to social campaigning) have for years been massive supporters of the BBC’s multicultural agenda.

What we are seeing in the slashing in the numbers of Christian programmes is a logical outcome of that approach. Christianity is now officially in the eyes of the Corporation the same as all religions in the UK, and deserves no special treatment. Those such as Her Grace who sup with the Devil cannot expect favours. Or put another way (King James Bible Galatians VI):

“Whatsoever a man soweth, that shall he also reap.”

And a woman, too, your Grace.

Share
Facebook
Twitter
WhatsApp
Email
Previous articleLaura Keynes: Lack of faith in motherhood underpins the surge in newborns taken away at birth
Next articleReader’s Comment of the Day: In politics the good die young