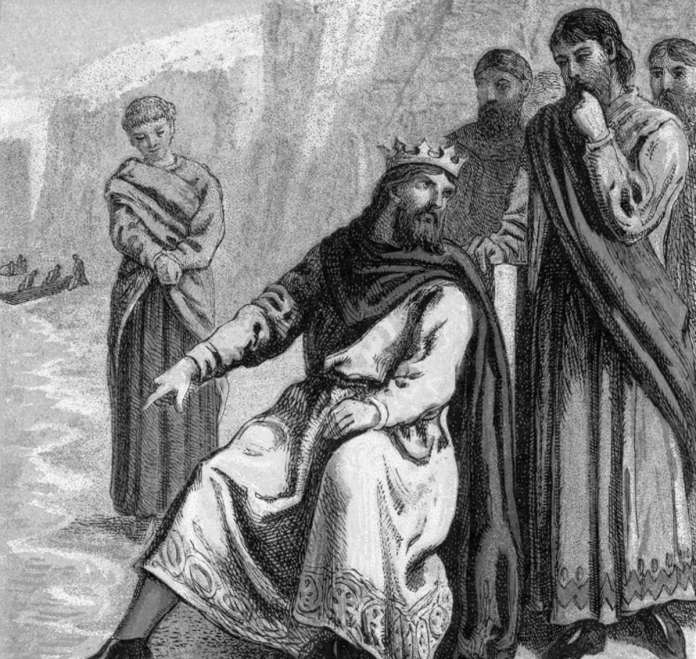 The legend of King Canute is probably apocryphal. But according to chronicler Henry of Huntingdon, the Saxon warlord demonstrated to his flattering courtiers in a lonely and rather soggy south coast vigil that kings could not control the tides despite their great secular authority. He wanted to show them that it was only the power of God that could do that.

It seems that no such modesty applies to our current leaders. As they continue with their phony, irritating, mostly sham and deeply boring general election posturing over only minor differences of policy, they have entered an unprecedented St Valentine’s Day accord that puts them firmly into Walter Mitty land.

Call-me-Dave, nasty Nicky and calamity Ed – almost unreported in the national press – signed an agreement under which they have pledged to continue their battle under the disastrous 2008 Climate Change Act to Limit the rise in global temperatures to under two degrees Centigrade over the next fifty years.

That’s right: they actually believe they have the power to regulate the generation of heat on that scale. This means that, despite their war-dance posturing, each of them will pursue identical policies of what amounts to economic madness: on the one hand, to continue to invest billions of our money into useless windfarms, vastly inefficient solar panel and electric car subsidies, and on the other, to force industry in the UK to ‘de-carbonise’, which means companies being compelled to compete in world markets where energy is increasingly cheap with their hands tied behind their backs.

Perhaps the most chilling part of this is that Dave’s so-called Conservative Party has seemingly re-affirmed the commitment to a raft of long-term economic and energy policies which, according to the reports of the deal, were dictated by an unholy alliance of what former Conservative environment secretary Owen Paterson called the Green Blob-so-called charities led by militant activists Greenpeace and The World Wildlife Fund, whose ideologies are underpinned by anti-capitalist neo-Marxist claptrap.

The other equally depressing ramification is that all three parties remain pledged to prefer renewable over cheap energy, such as coal and oil and gas. This means that that the poor and especially the old are now confirmed as being condemned to unnecessarily high energy prices almost ad infinitum.

So many issues are raised by this pursuit of economic madness that it’s impossible to know where to begin in unpicking their reckless disregard for voters’ welfare.

Point One is the arrogance of Dave, Ed and Nick. They are forcing on voters a raft of policies over which they now have no choice – except to vote Ukip. This is because they now seem to be the only party who dares challenge climate change orthodoxy and who can see that it is based on deeply sinister agitprop ideology rather than scientific certainty.

Point Two is that the three leaders have accepted that rising world temperatures are caused by fossil-fuel burning, despite increased evidence that other factors are involved. There isn’t the space here to detail the arguments, but a visit to this site shows the extent of credible doubt on scientific grounds. What is certain is that those who are most militantly pushing the climate change agenda in Paterson’s Green Blob are hell bent on socialist political change and anti-capitalism.

Point Three is that it confirms that we have a political establishment in which the differences between the parties over policies are blurring towards vanishing point. The Valentine’s Day madness confirms that Dave, Ed and Nick all want green energy, with all that this entails in terms of spending and waste. But they are also pursuing many other policies governing major areas of our lives that are almost identical: the farming out of our children away from their parents to ‘childcare’ on an industrial scale; the continuing blind commitment to the monolithic NHS, despite its inefficiency and inadequacy; comprehensive education that in reality is a descent into the bland and the incompetent; and the continuing involvement in a European Union that is driven by policies of the economic madhouse in the name of integration.

Point Four is that call-me- Dave is now confirmed as the most disastrous Conservative leader since Ted Heath. He was elected Conservative leader promising to effect change based on genuine traditional conservative values. In reality, the signing of the climate change accord confirms that he is driven by the same vapid, quicksand ‘principles’ as Tony Blair and his heirs.

Share
Facebook
Twitter
WhatsApp
Email
Previous articleLaura Perrins: Boris makes the supreme sacrifice of renouncing his US passport. Lucky Yanks
Next articleAlistair Thompson: A simple flat rate of income tax would sweep away the hypocritical row over avoidance and evasion