NewsPaperthe art of publishing
HomeNewsDavid Keighley: With the Chris Patten love-in, the BBC shows its pro-EU...
10

David Keighley: With the Chris Patten love-in, the BBC shows its pro-EU ankle 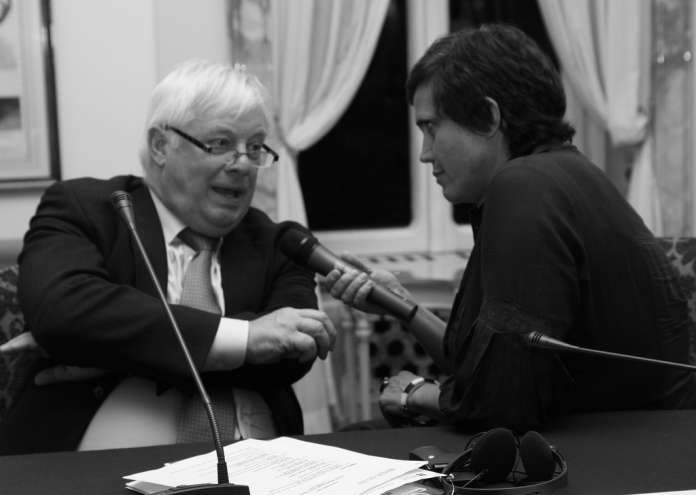 (This article was first published on News-watch)

One of the most extraordinary questions of the EU referendum so far was posed by Nick Robinson when he interviewed Lord Patten on the Today programme on Wednesday (27/4). In essence, it seemed that the Today presenter – having first noted how wonderful he thought the BBC was – invited former BBC Chairman Patten to say that the Corporation’s coverage was favouring too much the Brexit case.

The relevant sequence was at the end of the interview. This was it is full:

NR:  A last word on an organisation that you used to be in charge of, you were Chairman of this organisation, of course, which you . . .

NR:         There are people on your side of the argument now who are in favour of remaining in the EU who, to paraphrase them, say ‘the BBC is bending over backwards to produce balance in this argument, and doing so in a way that does not produce the facts.’

CP:         Well . . . erm . . . I think the BBC has an extremely difficult job. Erm, it’s having to cover this referendum, er, with the shadow of a Charter Review and Mr Whittingdale hanging over it, erm, I think that may make people excessively deferential when trying to produce balance.  You have the Governor of the Bank of England on, or, or the IMF chief, so you feel obliged to erm, put up some, er . . . some Conservative backbencher that nobody’s ever heard of on the other side of the argument.  And it does, it does . . . occasionally raise eyebrows, but I think I would prefer the BBC to be being criticised for being so balanced, excessively balanced, than for, than for doing anything else. It’s a very great broadcaster, which is dedicated to telling the truth, and that’s an unusual thing in the world of the media.

Before considering in detail how seriously irregular this exchange was, the fundamental ‘explanatory’ or ‘contextualising ‘ points that the BBC needed to make, but of course didn’t, are:

Against this background, a reasonable adversarial question to have put to Patten would have been whether – in the context of the blanket coverage by the Corporation of President Obama’s threat the previous week to put Britain to the ‘back of the queue’ for a trade treaty –  BBC reporting had been rigorous and balanced enough?

Instead, Robinson tamely asked what Lord Patten thought of the suggestion (from the ‘Remain’ side) that the BBC was bending over backwards to produce balance in the argument in such a way that it was distorting the facts. In other words, Robinson asked a strongly pro-EU figure whether the Corporation was doing too much to bring the ‘exit’ arguments to the audience. This gave Patten the opportunity both to agree with the main point,  then to be extremely condescending and dismissive of the ‘exit’ case – and to amplify the threat that Robinson suggested was an issue of concern. At this point, he cannot have believed his luck, and, indeed, he appeared slightly surprised (in his rather halting response) that he had been presented with such a wide open goal to attack his Brexit foes.

And here is how Lord Patten replied.  That was extremely difficult for the BBC to cover the referendum because of the ‘threat’ hanging over it from Culture Secretary John Whittingdale and the Charter Review..

His agenda was self-evidently political: that John Whittingdale was considered a threat to the BBC by the ‘Remain’ side because he had formally warned the Corporation that its EU coverage was considered in some quarters to be pro-EU. He suggested that in the face of this threat, BBC staff were being ‘too deferential’.

His next point stuck the boot in further and was both smug and condescending: against the high quality figures that the ‘Remain’ side could marshal, such as the Governor of the Bank of England, or the IMF chief, this deference meant that producers felt ‘obliged’ to scratch around and put on ‘Conservative backbenchers that nobody’s heard of on the other side of the argument’.

His parting point was that he would nevertheless prefer the BBC to be ‘excessively balanced’ in this way than to do anything else – which is why, he claimed, it was ‘a very good broadcaster dedicated to telling the truth’.

Robinson thus elicited an answer from Lord Patten that allowed him to vent in full his ‘Remain’ prejudices, to concur with his interrogator’s observations that the BBC was a very high quality broadcaster, to attack the calibre of of the ‘exit’ speakers, to imply the Charter review process was biased because it was in the hands of Brexit supporter John Whittingdale, and to air his belief that, if anything, BBC coverage of the referendum campaign was ‘excessively balanced’,  in other words, heavily biased, towards the Brexit side.

Nick Robinson, as well as being a Today presenter, is a former BBC political editor. It is an affront to journalism that this exchange ever happened, and – coming after his aggressive interview of Nigel Farage on the same day also noted on this blog – blatantly against the BBC’s referendum coverage guidelines.