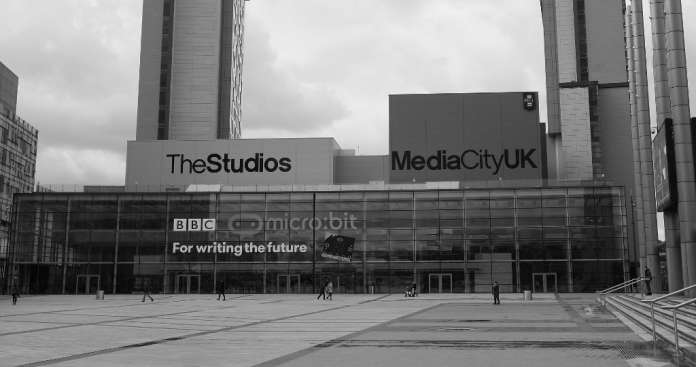 Aw, diddums! BBC staff in the plush Salford Quays Northern HQ are throwing out from their high chairs their steak knives.

Their beef? Someone, somewhere in the vast BBC hierarchy has decided to introduce ‘Meat Free Mondays’ in the staff canteen.

The carnivores at the Corporation – no doubt now a rare breed among the right-on staff – are not happy. So desperate are they that they are even appealing for local burger vans to roll up outside and set up shop.

But management is adamant about the meat ban. No matter that only 2.6 per cent of the population are vegetarians. A memo from BBC North Internal Communications loftily states:

‘Why are we doing this?  Well, to put it simply, it’s good for the environment. Skipping meat on the menu just for one day a week can help reduce greenhouse gas emissions, water use and land use.

‘A plant-based diet often reduces the intake of saturated fat, animal hormones, and cholesterol while increasing the intake of fresh fruits and veggies. That has the potential to reduce the risk of cancer, diabetes, obesity and heart disease,’

How very Big Brother! In other words, you are selfish, indulgent gluttons who cannot be trusted. We have to take action, both to save the planet and stop you killing yourselves.

In the BBC’s world, of course, this head-on bludgeoning is also undoubtedly about the big ‘D’ word as well – diversity. Vegetarians are a minority, so their needs must be underlined, promoted and protected.

Where next in this holier-than-thou culinary crusade? Well, as the new Charter comes into effect this week, disabled rights campaigner Tanni Grey-Thompson is among those who has been appointed to the souped-up management board. Her goal? Spending £100m on the diversity agenda and firing anyone who has the temerity to object.

Already, the Corporation is choking in bureaucracy in its pursuit of ‘diversity’ under its newly-introduced Diamond project, the aim of which is to check the ethnic and faith backgrounds of every guest and contributor to make sure targets are met.

In addition, the Corporation decided long ago that extremist claims of global warming and climate alarmism pursued by aggressive, totalitarian organisations such as Greenpeace and the World Wildlife Fund are based on incontrovertible scientific ‘consensus’.

Flick to the BBC News science section, and there is an endless  daily diet of gloom in tune with this latter-day ‘The End is Nigh’ reporting – at random this weekend: nasty humans and their belching ‘carbon’ emissions are dangerously bleaching coral reefs in Australia; causing unsustainable depletion of aquifers in the selfish pursuit of crop growth; and are bringing about Armageddon in South Georgia through triggering the melting of glaciers.

This diet of unalloyed doom has been a constant of the BBC website for more than a decade and so actually it is perhaps a miracle that the Corporation’s canteens have not been targeted by Corporation Thought Police before now. Where better to display their warrior green credentials?

What next on/off the menu?

Halal meat: The $64,000 question here, of course, is whether, in the interests of ‘diversity’, Corporation employees are already eating cattle and sheep slaughtered inhumanely in line with dark ages Muslim ritual.  Perhaps we should know.

Pork: How long, in the interests of not offending certain minorities linked mainly with the letters ‘I’ and “M”, will bacon sandwiches be on the breakfast menu? Will the BBC climate change warriors and diversity police combine to rule that such crass, confrontational working class fare is a delicacy too far?

Alcohol: Back in the 1980s, every executive had his own booze ‘hospitality’ cabinet stocked with fine wines and the BBC Club bars pulsed with life. Those days, of course, are long gone; but the BBC Club still offers alcohol  (beer, wine and spirits) as part of its hospitality packages. How long will this be allowed to continue?

Air miles: Foods that require such transportation are in the BBC’s cast-iron estimation highly damaging to the environment. So out must go trendy tropical fruits, out-of-season vegetables and salads. In come good old British staples: carrots and cabbage and spuds galore.

The truth, of course, is that – despite the BBC’s gung-ho approach – science has not proved at all that meat-free diets are better for the environment, as this excellent article on Science Alert shows. The basic common-sense reality is that ounce for ounce, vegetables pack far fewer calories than meat, and that, therefore, much more land is required to produce the equivalent nourishment.

But that, to the BBC, is logic that is not allowed. It is engaged in a political battle to change the world according to its own definition of what is right. And the poor, hapless BBC carnivores of Salford Quay can stew.

Share
Facebook
Twitter
WhatsApp
Email
Previous articleCerberus: When it comes to the money, we have the EU over a barrel
Next articlePaul T Horgan: Peaceable Fawcett is a far better choice for a statue