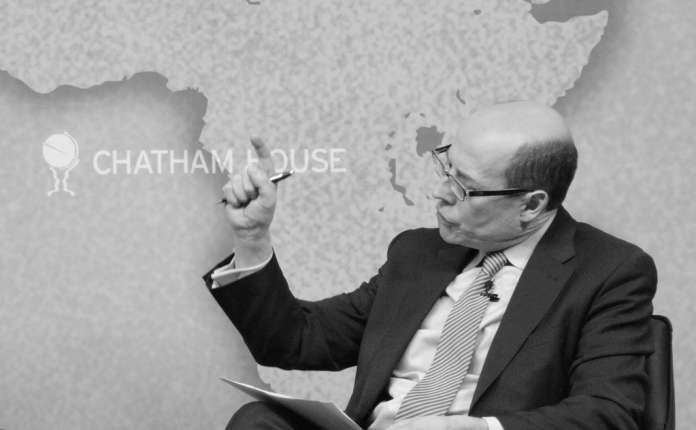 BBC presenter and ex-political editor Nick Robinson has been sounding off aggressively against those who, he complains, are ‘moaning’ that the Corporation’s reporting of Brexit is biased.

‘Calm down dears’, is his core, patronising message.

The Radio 4 Today presenter has declared in the Radio Times that, as departure negotiations proceed, there is no need to provide balance between the ‘Leave’ and ‘Remain’ sides in BBC coverage of post-Brexit developments.

Instead, the requirement is only for ‘due impartiality’(defined, as always, of course, by the BBC itself) and the goal is is to scrutinise ‘new questions’ about ‘immigration, trade and industrial policies’.

Robinson is bluntly critical of those who ‘do not accept that the war is over’ and have challenged the Corporation’s coverage by getting out their ‘stopwatches and calculators’ and by querying ‘the alleged tone of questions’ and ‘the number of interruptions’.

In terms of detail, Robinson’s praise for the BBC reporting seems to be based primarily on the Corporation’s Manual of Usual Excuses. This is wheeled out every time the word ‘bias’ is mentioned, and vigorously deployed by the BBC Complaints Unit to repel all boarders.

Direct from its grubby pages come the wearyingly predictable defences.

Robinson first claims that both sides have complained, so that means the BBC must be getting things right; then that Brexiteers such as Gove, Fox and Johnson are ‘remarkably reluctant’ to appear, so any shortcomings in that respect are their fault; and finally (the trump card!) that the BBC’s duty is in any case to its audiences, and they – he opines – don’t care about the obsessions of stop-watch wielding politicians. The only duty (again, of course, on the BBC’s terms) is to make sure they ‘understand’.

This all adds up to classic Corporation extreme stone-walling. It has been voiced by Robinson but has undoubtedly been cleared and co-ordinated by the BBC high command – and must also be seen as the official response to the complaint filed a couple of weeks back by Tory MP Julian Knight and 70 other cross-party MPs, who wrote to Director General Tony Hall about the Corporation’s failure to explore and reflect the pro-Brexit perspective.

And, with Robinson’s scathingly condescending references to stop-watches and calculators, it is also framed as a direct attack on the latest academic research from News-watch into six months of Today’s business news output. This found a serious failure to air pro-Brexit viewpoints and an unjustifiably heavy focus on gloomy forecasts for the UK economy that added up to a continuation of the Remain side’s Project Fear.

But despite all the bluster, this exercise in smoke-screen obfuscation is remarkably threadbare.

It boils down to a chilling statement of intent that coverage henceforward will be whatever the BBC decides is impartial – no matter what evidence is produced to the contrary.

The reality is that, as the latest News-watch report detailed, the BBC’s coverage of post-Brexit developments is sharply skewed towards the Remain side – and that in the Corporation’s self-declared agenda setting business slots, in six months, there were only only 10 contributions from clear supporters of Brexit, ranged against dozens who were not.

Robinson might rail against the use of ‘stop-watches and calculators’, but how can such lack of ‘balance’ or ‘due impartiality’ ever be defensible – and how else other than by careful, systematic counting can such blatant negativity be identified?

The BBC will NEVER countenance a complaint based on detailed research of their output – and that’s a gross affront to the licence fee payers that Robinson claims to be serving and helping to ‘understand’.

It is true that as Brexit unfolds, some elements of coverage do contain a wider range of anti-EU opinion than ever before. Prominent Leave campaigner, the Labour MP Gisela Stuart, for example, was afforded a very unusual brief slot on Today on the day of the Theresa May Article 50 letter to outline her timetable towards Brexit.

But small morsels aside, the Corporation is otherwise relentlessly focused on the Remain agenda. There’s a continuing, avid search for anything that suggests that ‘race hate’ has escalated as a result of the Brexit vote; Nigel Farage and Ukip continue to be pilloried – on Wednesday night, BBC1’s main bulletins reported Farage’s contribution to the European Parliamentary debate on Brexit in the worst possible light; and every obstacle in the Brexit negotiations, such as the Gibraltar clause, are seized upon with over- enthusiastic glee.

Robinson may claim that this is simple scrutiny of ‘immigration, trade and industrial policies’, but he’s wrong. It adds up to that since June 24, the BBC has mounted a declaration of war against the Brexit prospects and has sided firmly with the Remain side.

There has not been a single BBC programme that has looked at Brexit optimistically.