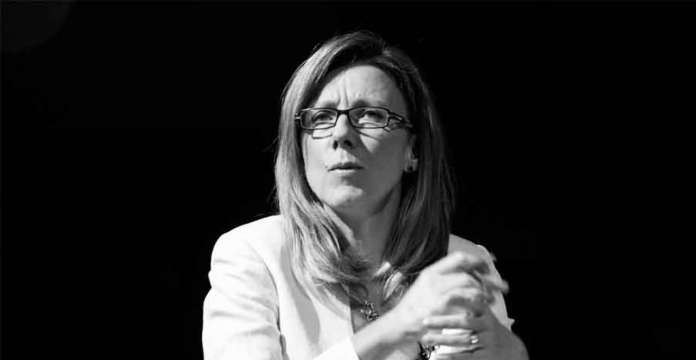 Sarah Montague, or, to be precise, Lady Brooke (her husband is a hereditary baron), has been a presenter of Radio 4’s Today programme from the tender age of 36 in 2002.

Apart from her BBC salary of probably around £250,000 a year, she doesn’t do badly in other respects, too. Her Ladyship levers her post as presenter of one of the Corporation’s most high-profile programmes to pull in what is almost certainly tens of thousands of extra pounds as a celebrity host of business conferences.

She is registered with a whole clutch of speaker agencies and examples of her outside gigs include the British Institute of Facilities Management, Food Matter Live or Soroptimist International and the NHS Confederation.

On Tuesday, from her lofty BBC perch, Montague had the chance to exercise the full range of her journalistic skills by asking some searching questions of an American Democrat at the heart of one of the biggest electoral debacles in the party’s entire existence.

Her interviewee? Bernie Sanders, the man who Hillary Clinton defeated by not much more than a whisker in the Democratic primaries. Quite a coup for the BBC, that. Forget Nigel Farage having an exclusive audience with President-Elect Trump; for the boys and girls at the Corporation, far more important and exciting was talking to wronged, cheated Democrats.

Said Lady Brooke must have thought long and hard about her opening fizzer in the pre-recorded joust. How to put him on the rack?  Why did so many Hispanics not vote for the Party? Ditto so many women, when the Democrat machine had blown tens of millions of dollars telling them that Donald Trump was the worst misogynist in the history of the world?

And had his party perhaps totally misread the national mood, ignoring the fact that millions of Americans were actually sick of the unrelenting doctrinaire socialism of Obama, Hillary and Sanders himself?

Er, no. None of the above. Said Montague instead:

When I spoke to him last night I asked about comments he made about the next President, and asked what he feared from a Trump presidency.

Our Bernie was not a bit phased by this Torquemada special. Without hesitation, he told the audience that the Democrat battle against racism, xenophobia and sexism was now at risk. Not only that, he was now very frightened. Why? That man Trump believed that ‘climate change is a hoax’. Shock, horror!

Where next for Sarah? Maybe a challenge about climate alarmism or the insane US dash to green energy? Or perhaps that 60 million Americans didn’t actually agree with him over his attack on Trump because, well, they had voted for Trump?

No, again. Like a flash, out came her yorker, aimed straight at Bernie’s middle stump. Her Ladyship shot back:

Some people have talked of him (Trump) as a fascist, and they’ve likened what’s happening now to what happened in the 30s. Would you go as far as that, as to say he is a fascist?

This was too much, even for our Bernie. Everything he had claimed in his first answer pointed that way, but he could not actually make the direct accusation. ’No’, he said. Why? Because our Donald was a ‘smart man’ – and that meant, of course, that he wouldn’t implement any of the policies he had campaigned on.

The point here is a deeply serious one. The whole interview can be heard here (at 7.31am). Montague in effect gave Sanders a platform to attack Trump, and in the rest of the interview – without a squeak of opposition or adversarial questioning – he outlined in great detail why the American electorate had, in effect, been deluded, stupid and wrong to vote for him, and really wanted the Democrat agenda.

The next day, her Ladyship was on the Trump trail again. The peg this time was the resumption of bombing in Aleppo. UN spokesman Justin Forsyth outlined that a fresh humanitarian disaster was unfolding with hundreds of children killed. Further, the city’s hospitals had been driven underground, water supplies were cut off and the winter cold was fast approaching.

Montague’s response? In effect, she asked only one question, that some people had attributed the resumption of the bombing to the election of Trump. Had it, she asked, ‘emboldened Russia’. Did he agree?

As it happened, Forsyth did not believe it had. But it was mission accomplished. Montague had linked directly the latest problems of Syria with Trump. The misery of those hundreds of dying children was his fault, even though he had been President-Elect for only a week. He had, she implied, ‘emboldened Russia’ already.

Last week, BBC Watch observed how Montague and the BBC machine had gone into funereal meltdown after the Trump victory. Montague’s approach this week is symptomatic of the fact that a full-scale Corporation attack on him is now in full spate. It is impossible to keep track. Monday’s Panorama – originally called America’s Most Hated President? – is one prime example. So was last Thursday’s edition of Question Time.

The BBC is now, in effect, at war – with her Ladyship Brooke/Montague in the vanguard.