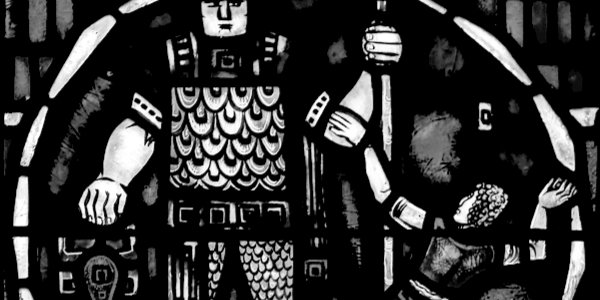 When Channel 4 invited Professor Jordan Peterson to be pulverised to a pulp by the mythical might of its star presenter Cathy Newman, it was re-enacting the battle between David and Goliath.

David and Goliath is the archetypal story of an ordinary shepherd boy destroying the ideological might and rhetorical bombast of the armour-plated establishment with a single slingshot. No wonder it has captured the imagination of millions of readers over two and a half thousand years across cultures and continents.

Prof Peterson adores archetypes. His writings and lectures and podcasts abound with references to Jungian and biblical archetypes. In the psychology of Carl Jung, an archetype is a primitive and pervasive idea, image, or symbol, inherited from our earliest ancestors, that forms part of our collective unconscious. It explains why we are drawn to certain stories more than others. My wife wrote her M Phil dissertation on the American writer William Faulkner and one of her chapters explored the Jungian archetype of the ‘Terrible Mother’.

The Newman-Peterson gladiatorial duel has been watched on YouTube around three million times and in less than a week has generated firepower in terms of mainstream media analysis, popular memes and social media exchanges, sufficient to sink a battleship. ‘It’s the most satisfying piece of poetic justice since the Comet came unstuck in that tunnel in Atlas Shrugged,’ writes James Delingpole hinting at its archetypal significance.

The victory of David over Goliath marks a pivotal victory in the unremitting wars between Israel and the Philistines – an incident in which an ordinary person confronts a giant and exposes his weakness by calling out the giant’s hyped-up muscle and might as fake and fraudulent. ‘Giants are not what we think they are. The same qualities that appear to give them strength are often the source of great weakness,’ observes Malcolm Gladwell in his book David and Goliath: Underdogs, Misfits and the Art of Battling Giants.

Every time I visit Israel, I go to the Valley of Elah. It is the vast plain where the Israelites fought the Philistines through the proxy of their representatives: David and Goliath. I’ve read and re-read the biblical story. I’ve re-imagined the strategy and subterfuge, the sights and smells, the cheers and the jeers.

David is the youngest of eight brothers. A shepherd. He doubles up as a lunch-box carrier delivering bread and cheese to his brothers on the battlefield. David is the archetypal underdog. Peterson is a clinical psychologist, former Harvard professor and now professor at the University of Toronto. This qualifies him to be part of the Establishment, not the underdog. But as a ‘classical liberal’ (which in today’s context is to be ‘conservative’), his fellow-professionals treat him as a pariah with a contagious disease. His single-handed skirmish against forcing him to use made-up pronouns for made-up genders put him at odds with the entire university and political establishment in Canada. Worst of all, as a white male, he lies at the bottom of the dungheap of intersectionality.

Goliath is Godzilla. He is 9ft 9in and is bellowing out threats and obscenities like a World Wide Wrestling Federation champion. Plus, he wears a bronze helmet and a bronze coat of mail, bronze shin guards, with bronze plates covering his feet. His three weapons are optimised for close combat: an armour-piercing javelin, a sword and a harpoon with shaft ‘as thick as a weaver’s beam’.

Goliath’s greatest weapon is his ability to generate terror through ideological slogan shouting and hurling ad hominem grenades. ‘All the men of Israel, when they saw the man, fled from him and were much afraid,’ the Bible reports.

Cathy Newman is classic establishment. Schooling at Charterhouse, one of Britain’s poshest public schools. Mainstream media. Channel 4. Oxford. Fierce feminist. Combative interrogator. Previous stints with The Independent, Financial Times and The Washington Post. Above all, her womanhood puts her nearly at the top of the intersectionality hierarchy (she’d be at the pinnacle if she had the added virtues of a black/brown skin and was lesbian).

In David’s archetypal battle with Goliath, the underdog chooses not to use the formidable weaponry, which is the default choice of the establishment. King Saul urges David to carry his sword and armour so at least he’ll have a fighting chance. David refuses. ‘I cannot go with these, for I have not tested them,’ he tells Saul. He takes his staff and five smooth stones and puts them in his shepherd’s pouch as ammunition for his sling.

What happens next is the stuff of heroic legends and archetypal myths. David slips a stone into his sling and aims it at Goliath’s exposed forehead. Goliath crashes to the ground. David rushes towards the giant, seizes his sword and chops off his head. The Philistines see that their champion is dead, and flee.

Over the decades the Left has grown to the stature of Goliath. The Left is the Establishment. Goliath-Leftism controls school and university, media, Parliament (even the so-called Conservatives), Hollywood and the church (even the so-called Evangelicals). ‘For at least the last hundred years, the world’s most dynamic religion has been neither Christianity nor Islam. It is leftism,’ writes Dennis Prager.

Virtually nobody dares to take on the Left in its own gladiatorial bear pits. Those who do die the death of a thousand cruel caricatures (alt-right, homophobe, Islamophobe, sexist, bigot, racist, misogynist, transphobe) and are burned at the media stake as heretics.

But in the ultimate analysis the heavy armour and artillery of the Left is simply a delusional and fictional inferno of hysterical and apocalyptic fearmongering based on a wretchedly flawed and failed ideology. A well-trained projectile warrior with a slingshot and a few pebbles of facts, logic, and philosophical nous can demolish a dubious façade of straw men, meaningless slogans, monumental untruths, moral relativism, the scaffolding of victimhood and an intellect crippled by a lack of regular interaction with truth.

Medical experts now tell us that the biblical Goliath is suffering from a serious medical condition called acromegaly. The pituitary gland overproduces a growth hormone – which explains Goliath’s giant size. Acromegaly has a common side effect – severely restricted sight or double vision. Goliath cannot clearly see David coming towards him with his slingshot. He is comfortable in his armour – which actually renders him slow and sluggish. David wins because he chooses not to play by Goliath’s rules.

Cathy Newman loses because her vision is so blurred and distorted by Leftism and feminism that she cannot clearly see Jordan Peterson coming towards her with the most elemental pebble-like truths, i.e. men and women are different. Most conservatives see the Left as giants that cannot be defeated. But the very thing that gives the Left its size – its hardcore fundamentalist ideology that brooks no interrogation, facts, or truth – is also the source of its greatest weakness.

That is why Delingpole is correct in suggesting that Peterson’s archetypal battle with Newman ‘marks a pivotal victory in the culture wars – an incident in which the weaknesses of the regressive left have never been more cruelly or damningly exposed’.