TO GENERATE maximum impact, political defections should be both unexpected and shocking. In contrast, yesterday’s defections by so-called ‘Conservatives’ Anna Soubry, Sarah Wollaston and Heidi Allen to the newly launched Independent Group of eight ex-Labour MPs, and their simultaneous resignations from the Conservative Party, must rank among the most expected and least shocking defections in British political history, if the prevailing reactions of ‘What took them so long?’ and ‘Good riddance’ are anything to go by.

Since the result of the June 2016 EU Referendum it has been obvious that their nominal allegiance, even to the allegedly ‘Conservative’ Party, has been hanging by a very thin thread, and that the claim by all three to be ‘Conservatives’ has long rested on shaky foundations.

Soubry even has previous form with defections. Having originally been a Liberal, she walked out on the Tories in 1981 to join the Social Democratic Party after its launch by the Gang of Four who quit Labour in protest at its march towards Hard-Leftism. 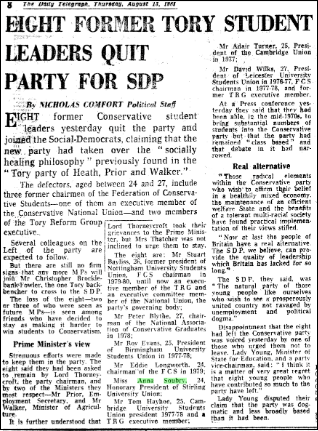 She has always been the most vocally anti-Brexit of the band of Referendum Refuseniks clustered around her in what’s become known as Remainer Corner in the House of Commons, on the Tory back benches away to the Speaker’s right, consistently opposing anything except a Brexit-In-Name-Only-Remain-by-Stealth, or something barely distinguishable from it, despite the inherent hypocrisy. 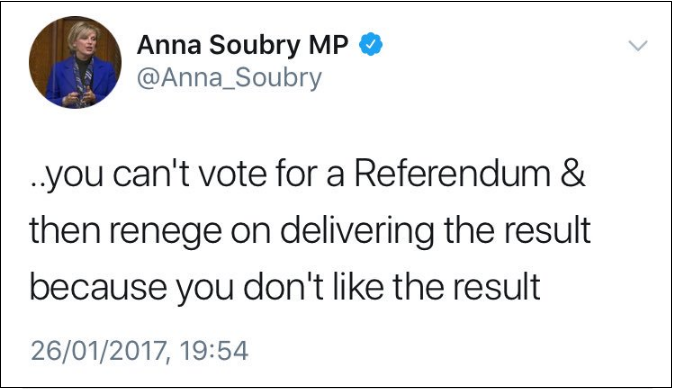 Wollaston, too, is a flip-flopper, always in my view something of a false-flag ‘Conservative’ after being elected in Totnes via an Open Primary which the Tories managed to botch by allowing Labour and LibDem supporters to vote in it. During the EU Referendum campaign, she was initially Leave before switching to Remain in what looked like a planned, orchestrated move to damage the Leave campaign. More recently, she has opposed a second referendum, before U-turning and demanding one.

Allen’s 2015 election to represent South Cambridgeshire arguably owed a lot to her predecessor, former Cabinet Minister Andrew Lansley, but she has also been a serial rebel very much on the Left of the party who has often looked as if she would be far more politically at home in the Lib-Dems. Despite voting to trigger Article 50, she’s consistently voted to give the Commons powers to dilute, frustrate, or even block Brexit.

A glance at the defectors’ resignation letter reveals, apart from a fairly tacit admission that their aim was always a ‘Conservative’ Party unmistakably in a centrist Fabian-Blairite mould, a litany of self-serving hypocritical justifications for their actions, plus some assertions which either betray their true political colours to an extent they might not like, or an astonishing lack of political awareness.

The party is increasingly being dragged to the Right, they insist, including, on Brexit, by the ‘hard-line’ ERG and DUP in whose vice-like grip policy is trapped. Quite how this squares with a Cabinet dominated by Remainers, a party intent on capping the price at which energy can be sold, and both taxes and public spending at high percentages relative to GDP, is not explained. And their slightly hysterical claim of a ‘Purple Momentum’ taking over the party has already been comprehensively debunked.

They also seem oblivious to the fact that the ERG, having conceded much already, is merely trying to ensure the Government abides by the manifesto on which it was elected in 2017, namely to leave both customs union and single market – the same manifesto which all three defectors were happy to endorse and stand on to achieve re-election – while the DUP has as its overriding aim protecting the territorial integrity of the UK from collusion between the EU and the Republic of Ireland which it perceives, not without justification, to be a threat to it.

At this stage, it’s early days trying to predict what the defectors’ effect on the Parliamentary arithmetic surrounding the Brexit process will be. There’s an argument that, longer-term, the Independence Group which Soubry, Wollaston and Allen have joined will fade into irrelevance, just like the original SDP. The potential for clashes, not only of policies, given the members’ disparate political heritages, but also of egos, looks high.

May’s overall majority with the DUP over the combined Opposition parties has just been reduced by six, but I’m unconvinced that more ‘Conservative’ defectors won’t follow, possibly including Phillip Lee, Nick Boles and Dominic Grieve, against whom deselection proceedings are either under way, imminent, or extremely likely. My initial view is that this makes both a formal ruling-out of a No-Deal Brexit and a Second Referendum more likely (hence my article yesterday on why the latter would be totally devoid of any democratic legitimacy, and so must be vigorously opposed).

All three defectors are, naturally, strong supporters of a second referendum via the so-called People’s Vote campaign. Curiously, though, they seem not very keen at all on a People’s Vote on themselves in their own constituencies, even though they’ve repudiated the manifesto on which they last stood and got elected, as, at the time of writing, none has pledged to seek a fresh mandate under her new flag by resigning to precipitate a by-election.

Soubry, Wollaston and Allen are defectors from national democracy in refusing to accept the outcome of the biggest democratic mandate for one single policy in British political history.

They are defectors from party democracy in declaring that they would leave the Conservative Party rather than accept a democratically elected leader who was not to their liking.

And they are defectors from local democracy in switching sides rather than facing a de-selection process but nonetheless refusing to resign and trigger by-elections to allow each of their constituencies to vote on whether it still wants them to represent it in Parliament.

All three are certainly defectors: but not so much defectors from a political party where they never deigned to be anything more than conditionally semi-detached anyway as defectors from democracy itself.