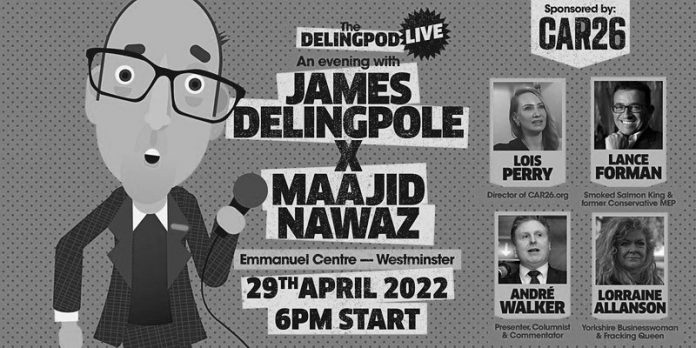 For me one of the weirdest – but most wonderful – accidental consequences of the last two years’ madness has been discovering so many new and unlikely bedfellows.

Take Maajid Nawaz. Twenty years ago, Nawaz was languishing in a grim Egyptian prison under constant threat of torture or death. I would probably have been among those secretly hoping he would stay there.

In those days, like so many of us in the aftermath of 9/11, I had become convinced that the greatest threat to world peace was Islamic fundamentalism. I deeply resented having to worry every time I got on the London Underground or boarded a plane that I might be blown to smithereens by a terrorist bomb. A big part of the problem, I believed, were articulate, well-educated, British-born Islamists like Nawaz.

He was a leading member of a proscribed group called Hizb ut-Tahrir, whose stated purpose is to re-establish the Islamic caliphate, unite the Muslim community and implement Islamic law globally. This made him, as far as I could see, a traitor to his country (whose liberal values he was clearly bent on undermining) and a public enemy best prevented from influencing impressionable young minds and converting them to the jihadist cause.

That was then. Now I find myself in the same foxhole as Nawaz, facing the same multitude of enemies, and I am proud to count him a comrade and an ally. A former LBC radio presenter (till he was sacked for wrongthink) Nawaz is one of only a handful of high-media-profile figures in Britain – or indeed anywhere – who have dared speak out against the official narrative: on Covid, on vaccines, on lockdowns, on Central Bank Digital Currencies, on the malign purposes of the World Economic Forum and, most recently, on Ukraine.

Which is why I’m so looking forward to chatting to him onstage in central London at my Delingpod Live event at the end of this month. I loved his heroic and enlightening performance on the Joe Rogan Show. This, I hope, will be even more illuminating and entertaining, as I push him still further on key questions such as: ‘What is REALLY going on?’ It will be a freewheeling conversation about whatever takes our fancy before an audience of like-minded folk: a gathering of the awake. You’d be mad not to be there – it’s going to be great and I look forward to meeting you all as we join together in solidarity on our mission to throw off the shackles which have bound us for so long. You know what I mean. And if you don’t: why not come and find out?

For further details and to purchase your tickets click here.