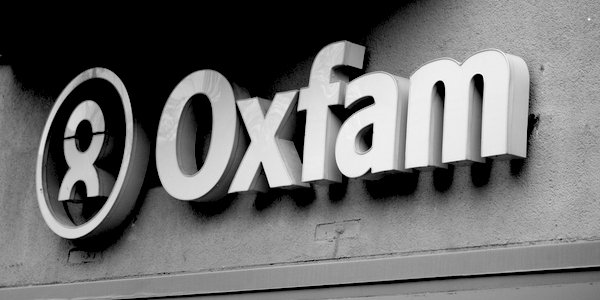 The developing news about Oxfam – not news at all for many of its employees and people working in conflict and disaster zones – is indicative of systemic failures within the charitable sector. For these workers it is a confirmation of what they have always known about, a new and unpleasant form of exploitation, once associated with the worst aspects of colonialism.

Oxfam and its ilk are gargantuan charities which have morphed into quasi-governmental organisations, complete with cover-ups and lack of transparency. Financed by a combination of billionaires, wasteful government departments, the corrupt UN and unsuspecting individual charitable donors, they are no longer fit for purpose.

Oxfam has been shameless in its promotion of socialism, open borders, uncontrolled immigration and even in generating acrimony towards Israel.

It is clear that Oxfam and other mega-charities have attracted all sorts of sex pests and paedophiles, yet arrogantly assumed that their Left-wing dogma and ‘good works’ would be sufficient justification to hide or excuse their misdeeds.

For it now it transpires that Oxfam’s chief executive, Mark Goldring, was aware of allegations of harassment and serious sexual misconduct by aid workers in Haiti. And so was Oxfam’s head from 2001-2013, Barbara Stocking. This news report from 2011 shows that Oxfam’s Haiti director at the time, Roland van Hauwermeiren, was allowed to resign quietly rather than be fired and risk scaring off potential donors. Despite Oxfam’s recent protestations about capitalism, it seems from their initial reaction to this scandal that money is far more important to Oxfam than morality.

It is ironic that Dame Barbara Stocking, who in her present position as president of Murray Edwards College, Cambridge, so assiduously advances the feminist agenda, admits she did not fire van Hauwermeiren as soon as this debauchery came to her attention. Her lack of effective action reeks of a possible cover-up of exploitation of vulnerable women and girls in Haiti.

Hers is one of many examples of how far the opulent lifestyles of charity bosses, with their cherished political agendas, pension pots and bloated remuneration packages, are from the traumatised and impoverished girls of Haiti, who have been used and thrown away like crumpled tissues.

But the truth has a way of coming out. The bad news for Oxfam continues to spew like a broken sewer. It turns out that before being appointed head of Oxfam in Haiti, van Hauwermeiren ran Oxfam in Chad, where allegations have emerged that in 2006 staff there used sex workers at the charity’s premises.

And this is what the taxpayer has been funding. I have written before here and here on how British taxpayers unwittingly donate money via the Department for International Development (DfID) to UN subsidiaries such as Unicef, the Climate Investment Fund, Green Climate Fund and the World Bank. And with reference to Oxfam, last year DfID gave it a whopping £32million.

Even more disturbing is the symbiotic relationship between DfID and Oxfam, such that Andrew Mitchell, International Development Secretary in 2011, said he could not remember hearing about the Oxfam scandal in Haiti. Oxfam receives millions of pounds in direct donations and from the taxpayer. But where is the accountability? Did no one ask where all the money goes? Surely a government department owes it to the taxpayer to keep account?

Its American branch received £720,000 from George Soros’s Open Society Foundation and, from its Open Society Policy Centre, between £36,000 and £72,000. The UN also contributed more millions to Oxfam via various subsidiaries. Not to be left out, that other giant charity, the Bill and Melinda Gates Foundation, gave £1.8million. These organisations perpetually finance Oxfam as though it is a struggling grassroots start-up and not the extremely wealthy charity it is.

The fact is that DfID and Open Society Foundation have been habitually funding Oxfam and, curiously, both also finance some of the same opaque organisations. Open Society Foundation pledged £3.3million to an obscure mining and extraction compliance organisation in New York called the Natural Resource Governance Institute, to which, since 2013, Dfid has also committed more than £20million. Why is our government financing an organisation that suspiciously seems to be part of this exclusive virtue-signalling and unaccountable gravy train? And who made the arbitrary decision to hand over this large chunk of our money to fund their salaries and no doubt their expenses too? Who monitors and checks this? The lack of transparency is in itself corrupting, especially given that a ring-fenced budget means the money has to be spent. And DfID certainly goes on spending frenzies, sometimes funding ridiculous projects and enriching tyrants, as I revealed here.

It is not only large sums that are exchanged between these charities, but their employees as well. An elitist clique of charity bosses, civil servants and ex-MPs move seamlessly from one well-paid job to another within this exclusive circle of lavishly funded organisations, as David Keighley details here. Is it any surprise, then, that they like to finance each other’s organisations? Several Open Society Foundation employees have previously worked for Oxfam. Karen Brown was Oxfam chair in 2015 when it was criticised for pressurising vulnerable elderly people into donating money. Now she is chair of the Disasters Emergency Committee, which gave Oxfam £8.7million last year.

David Miliband, former Labour Foreign Secretary, is earning an outrageous £400,000 as head of the International Rescue Committee (IRC). True to form, in 2016 DfID handed £3.6million to this pro immigration organisation. And no prizes for guessing that the Open Society Foundation also funds it, giving £72,000.

The plight of the dispossessed, forgotten and impoverished has been ignored for far too long. How can these charities and DfID, which are so heavily invested in each other, with such a sycophantic and symbiotic relationship that they are now an effective cartel, be trusted? This is why DfID must be disbanded and in its place a budget set aside for direct spending on disaster relief alone. Let British taxpayers decide where to donate their hard-earned money. The fundamental purpose of charity – the giving of aid and support – needs to be restored.