NewsPaperthe art of publishing
HomeNewsDon’t complain about the culture war, Mr Fry – you started it
136

Don’t complain about the culture war, Mr Fry – you started it 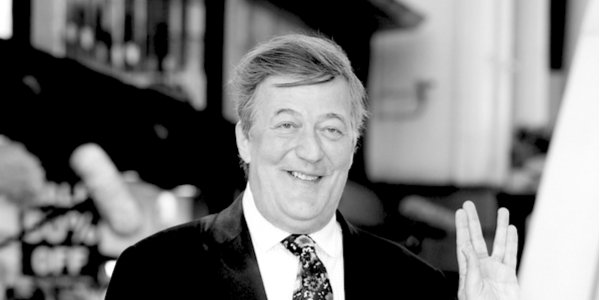 Weeping and gnashing of teeth in celebrityland: this week Stephen Fry asserted that classical liberalism is dead. You can read The Guardian’s report here.

‘A grand canyon has opened up in our world,’ Fry said at an arts festival in Australia. In his view the two opposing sides are the new Right, promoting a bizarre mix of Christianity and libertarianism, and the ‘illiberal liberals’, obsessed with identity politics and complaining about things like cultural appropriation. ‘These tiny factions war above, while the rest of us watch, aghast, from the chasm below.’ He mournfully said that classical liberals used to control the flow of ideas and now they no longer do. ‘We (presumably people who share his opinions) are irrelevant and outdated bystanders.’

Doubtless his comments will be welcomed by swathes of people in the West reeling from Brexit and Trump. For those of us who knew something was in the wind long before 2016, Fry’s comments sound like yet another angry Left-liberal who did not see it coming.

To an uninstructed reader, Fry’s comments may seem fair enough: just a public commentator voicing opinion. However, when his past activities are considered, it all starts to look quite different.

He was, let us recall, a leading light in the ‘alternative comedy’ revolution of the 1980s. This had Mao-like strictures and used sexual and identity politics and a loathing for Margaret Thatcher as a battering ram into the mainstream. In the time-honoured fashion of revolutions, its practitioners became far more powerful, entrenched and smug than the despised variety performers they deposed. Theirs became the only politics permissible in the arts and entertainment world: divergence from the Left liberal worldview meant that you would need to seek some other employment or at least keep quiet. We live in that world now, a world of hair-trigger political correctness, humourlessness and an ever-escalating legal war on free speech. Quite amazing, isn’t it, to think that a successful comedy industry has been built up that is not actually funny? It’s like the car industry prospering after abolishing wheels.

Fry has also supported Labour for many years and according to his website has written speeches for Tony Blair and Gordon Brown. He has enjoyed a long career as actor, writer, director, novelist, memoirist (detailing his use of cocaine), television presenter, newspaper columnist and Twitter demigod sharing his pensées with more than 12million followers. He is a fluent and intelligent man. Now he has joined the swelling ranks of the liberal elite who voice their disdain for the rebellious little people. Did none of these intellectual colossi see there would be trouble ahead in the decades when they had everything going their way?

Fry is now swiping at the Left. Given his form this is rather cheeky and needs some unpacking. During New Labour’s quiet revolution 1997-2010 it very successfully employed political trickery from America, namely Bill Clinton’s technique of ‘triangulation’, in essence acting as if you belong to the party from whom you wish to steal votes while having no intention of behaving that way. To use the language of conjurors, this entailed misdirection and sleight of hand. To someone of a theatrical bent, such as Tony Blair, this was manna from heaven. Pose for the telly and tabloids, talk fiscal rectitude, law and order and welfare reform while in fact legislating in the opposite direction: smuggling in neo-Marxist social and police policy, political correctness, dumbing down (while expanding higher education), multiculturalism, weakening adult authority, and imposing massive immigration under the radar, then changing the law to criminalise anyone who might complain. Add ‘light touch regulation’ and you have the breeding ground for the insufferable SJWs that Fry complains about, with their toy degrees and their day-glo communism: a low-wage gig economy headed by a complacent oligarchy and its subservient political ancien regime. These are the children of the revolution.

Then there are the silent and despised majority of workers and taxpayers who were on the receiving end of the centre-Left’s project in the West. They are also on the warpath because they have been hoodwinked by the global elite and its vast army of influential fellow travellers. In the citadels of power their votes counted for nothing, and all they got was two fingers from the establishment when they voted for Brexit or Trump.

That is the problem with triangulation: it tends to power its users with rocket fuel for a time and then it blows up in their faces. Voters get very angry when they have been conned. The past two-and-a-half years has been an object lesson in that, yet Theresa May is still merrily triangulating her way through the Brexit negotiations. There will be a price to be paid for that in the future.

An alarmingly small number of the high-profile personalities aggrieved by Brexit and Trump are prepared to put their hands up and admit what went wrong. That would mean admitting error and intelligent people often have a rooted aversion to doing that.

It seems almost unnecessary to detail his grudge against Christianity: as a gay man he is clearly affronted by its rules and regulations. It is perfectly reasonable to object to and criticise the Church and its dogma but there is surely a corollary to this that any civilised and educated person must recognise: the origin and maintenance of that which we call western civilisation owes a great deal to Judeo-Christianity. As such it is surely the duty of wealthy, influential and prominent figures, who have benefited the most from a stable, fair and peaceful society, to do what they can to support the underpinnings of that society, not saw away at them and then complain when that society becomes rent with division and anger. Watchwords such as caution and scepticism need to make a comeback.

The world of the past 25 years is starting to unravel and it is no good Left-wing celebrities moaning about it now. It is all a bit reminiscent of the French revolutionary Robespierre in 1794, finding to his horror that the baying mob had come for him. To Fry’s credit, he has called for calm and decent behaviour in the culture wars, but I fear it is too little too late: the reckoning has arrived in the form of division, rage and extremism, and even the old revolutionaries can hear, to adapt Arnold’s Dover Beach, the melancholy withdrawing roar of common sense, and despair as ignorant armies clash by night.