NewsPaperthe art of publishing
HomeNewsDoubting Justin and his virtual churches
0

Doubting Justin and his virtual churches 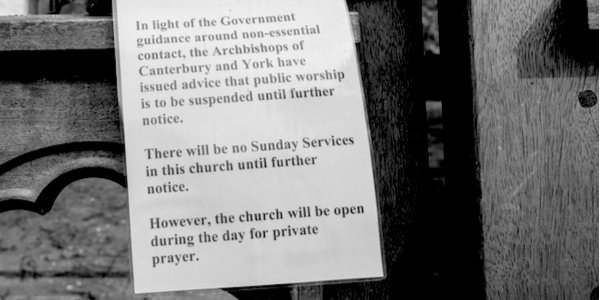 DOES the Archbishop of Canterbury think that once, the Lord willing, the lockdown is over, there would be any Christian imperative for churches to start meeting together again physically in their buildings?

‘The church building is a building, the Church is the people of God, and when we don’t go to the church building we go back to what we did in the early centuries of the Church and what churches all around the world do at present, which is we meet in homes, just family and household, we use the wonders of technology to be in touch with each other, but we recover the sense that Jesus says, “Where two or three are gathered in my name I am there with them”. And they don’t even actually have to be physically gathered, virtually gathered does very well indeed. Jesus is quite up to date on this stuff.’

Who in the Church of England or in any other Christian denomination in Britain is disputing that the Holy, Catholic and Apostolic Church is ‘the people of God’? But if as the Archbishop insists ‘virtually gathered does very well indeed’, why not continue with livestreamed services from the vicar’s study and Zoom meetings for small groups after the lockdown?

Does Archbishop Welby really think that online meetings can live up to the New Testament definition of the Church as the Body of Christ?

According to the Apostle Paul’s teaching, especially though not only in 1 Corinthians, the Church works as the Body of Christ when its members meet locally in a shared physical space for mutual edification through the exercise of their spiritual gifts and to share the Lord’s Supper together: ‘For whenever you eat this bread and drink this cup, you proclaim the Lord’s death until he comes’ (1 Corinthians 11v26 – NIV).

The New Testament description of the Church as the Body of Christ surely shows that ‘virtual’ can never beat ‘physical’.

Has any Christian in this country or anywhere else said that the living Lord Jesus Christ is not ‘quite up to date’ with technology? But the risen Lord did not hold ‘virtual meetings’ with the first witnesses of his physical resurrection from the dead. Though as the incarnate, crucified and risen Lord of heaven and earth he could have created the necessary technology for a virtual meeting with doubting Thomas, he chose not to. He appeared physically to Thomas and commanded him: ‘Put your finger here; see my hands. Reach out your hand and put it into my side. Stop doubting and believe’ (John 20v27).

Thank the good Lord that he did make himself known physically to the first witnesses of his bodily resurrection from the dead. It is surely unlikely that Thomas would have declared ‘My Lord and my God’ if Jesus had chosen to hold an online meeting with him.

In his video, Archbishop Welby sounded like an official spokesman for a long lockdown. Where was the expression of empathy for Christians under these conditions of virtual house arrest missing the physical gatherings of their church families in the familiar building? Where was the expression of regret at the restriction on the practical love and good deeds that Christian people can do in their local communities?

The Archbishop of Canterbury believes keeping church buildings closed during the lockdown is ‘ethical’. But what does he think about the potential crashing of the economy if the lockdown goes on into May? How ethical is that?

Sad though it is for a British Christian to say, the words of a secular lawyer seem to be far more worth their weight in wisdom than anything that has so far come from the leadership of the Church of England. Former UK Supreme Court judge Lord Sumption said in a BBC Radio 4 interview on March 30:

‘The real problem is that when human societies lose their freedom, it’s not usually because tyrants have taken it away. It’s usually because people willingly surrender their freedom in return for protection against some external threat. And the threat is usually a real threat but usually exaggerated. That’s what I fear we are seeing now. The pressure on politicians has come from the public. They want action. They don’t pause to ask whether the action will work. They don’t ask themselves whether the cost will be worth paying. They want action anyway. And anyone who has studied history will recognise here the classic symptoms of collective hysteria.’ You can read the transcribed interview on Peter Hitchens’s blog.