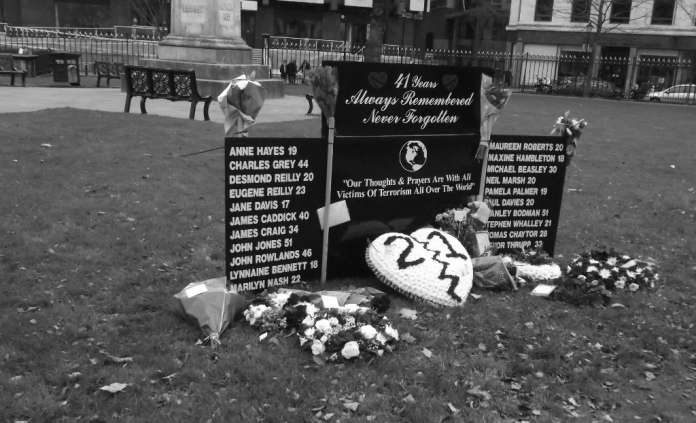 There are times when the only rational response is to hold your head in your hands and wonder at how good people can get it so wrong. Recently the reflections of Peter Taylor on his 50 years of reporting on terror was one such time. Much of the programme was good, especially the interviews with those, particularly from Ireland, who had been terrorists as youngsters but looked back with the deepest regret.

Through half a century Taylor has sought to understand terrorism. In English ‘to understand’ has various meanings. It can mean that we discern the personal motivation behind a particular event, or it can mean that we sympathise with the people involved. In his determination to get to the root of terrorism, Taylor veers too often towards the latter.

There is the ‘understanding’ statement that the IRA, ‘killed many civilians, let’s not underestimate that, but by and large the IRA tactic was not to deliberately kill civilians – although many civilians, I hasten to add, were killed by the IRA’. To accept statements from the IRA at their face value pushes innocent naivety to its limits, especially for a veteran journalist.

There are too many instances of the Provisional IRA of Gerry Adams and Martin McGuiness, like other terrorist organisations, deliberately planting bombs which could not do other than kill civilians. Kingsmill, Tullyvallen and the ethnic genocide practised along the Irish border are among the despicable sectarian-motivated crimes deliberately perpetrated by this terrorist organisation against innocent civilians.

Unfortunately, an underlying thread within the programme was that terrorism is not only a fact of modern life but is to be understood as a reaction by those who see themselves as dispossessed. Taylor spent considerable time in Northern Ireland and has clearly been emotionally impacted by his experiences there. Detrimentally, his programme never questioned why people who had votes, political parties and access to power should plant a bomb at a war memorial in Enniskillen or on the streets of Omagh.

We all accept that Britain did not act during the Irish Troubles as a liberal progressive journalist would wish and in compliance with the demands of the BBC’s editorial board. We did much that was wrong, and should admit that crimes were committed. This does not mean that there is little difference between the British Army who were tasked with maintaining peace and the terrorists who slaughtered worshippers in church or planted bombs in cars parked in busy streets.

As only a progressive can, Taylor was shocked that Army personnel celebrated the death of terrorists, even baking cakes when a terrorist was killed. It is somewhat doubtful that during the Battle of Britain RAF pilots did not celebrate downing German aircraft bombing Britain, or that sailors did not celebrate the sinking of a U boat.

Service personnel are trained and tasked with killing their and our enemies and naturally celebrate when they succeed, especially when those enemies are terrorists who wear civilian clothing and plant bombs in shops and city streets. Taylor’s reaction illustrates the gulf in mindset between those who observe and those who act. The observer is shocked, the actor understands.

It was suggested that we should talk to our enemies to end the war on terror. Eliza Manningham Buller made the valid point that all service personnel would agree with, it is better to talk than to fight. But does it always work well, and do the enemies want to talk?

Within terrorism there are significant differences in ideology and practice. Equating the IRA with ISIS is profoundly mistaken. The IRA had been infiltrated, contained and was facing defeat, support from deluded Irish Americans was drying up, they had little choice but to enter talks and end the ‘armed struggle’. Blair, Major and Clinton then gave the IRA what they wanted, keys to the door of power. It takes a special kind of brilliance to surrender when on the verge of victory.

ISIS not only have no wish or inclination to talk, it goes against their clearly stated philosophy. Can we seriously envisage the leadership of ISIS or Boko Haram entering reasoned political discussions with despised kaffirs. If they ever did, can we imagine them keeping to an agreement or would taqiyya, that doctrine whereby Muslims are permitted to lie to unbelievers, come into play?

Speaking of ISIS Taylor rightly said that victory over ISIS lay not in crushing their armies but in defeating their ideologies. But what are we to do while we try to deal with a generation in the West vulnerable to propaganda from people who burn their prisoners alive, crucify Christians and kidnap young women and sell them as sex slaves? The only option we have with the Islamist terrorists who have declared war on the West is to fight them with all our might.

Taylor was distressed that Israel took action against the Palestinian murderers at the Munich Olympics. What should Israel have done? Is it at all reasonable to think that anyone else would have taken legally acceptable action? The only alternative for Israel was to do nothing, let the callous murderers walk away to be féted by the Arab world and encourage other terrorists.

To imply as Taylor did that Israel’s actions were followed, as a consequence, by decades of continued terror attacks is an appalling suggestion. Arabs were killing Jews long before Munich, the Israel action put them on notice that they wouldn’t always get away with murder.

There is the suggestion that many of the young radical Western Muslims who went to Syria and joined ISIS, were motivated by the West’s invasion of Iraq. The implication that this indicates that somehow the terrorism of ISIS was rooted in Western geopolitical actions is common, but fallacious. It is not our fault. The ideology which gave birth to ISIS existed for centuries before George Bush and Tony Blair. What is being worked out today has been centuries in the making.