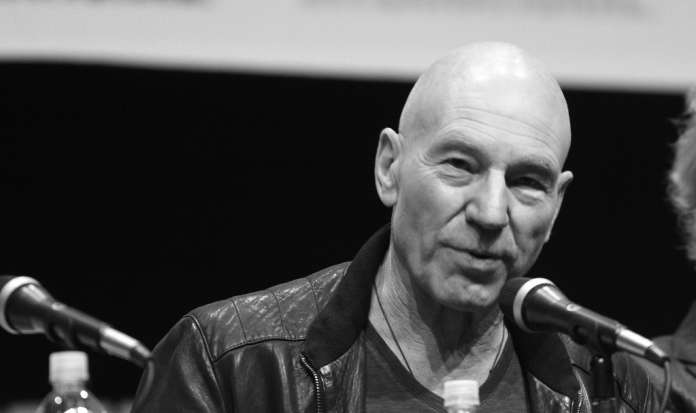 Luvvies are in the entertainment business, which is why they are so entertaining. The more seriously they take themselves, the more entertaining they become.

Sir Patrick Stewart OBE, star of X-men and Star Trek, told Trump-hater Whoopie Goldberg on ABC’s The View that after living in the USA for nearly three decades he will at last take out American citizenship. Why? Isn’t it obvious, in order to oppose Trump, of course.

‘I am now applying for citizenship because I want to be an American, too. Because all of my friends in Washington said there is one thing you can do: Fight, fight. Oppose, oppose. But I can’t do it [yet] because I’m not a citizen.’ All you ‘deplorables’ had better watch out, Captain Picard is coming to get you, and he has a phaser.

Trump gets it in the neck, sometimes rightly, for his tweets. Clearly, he is not alone looking for something to do in the middle of the night. Stewart has tweeted that he, ‘Had the worst sleep of my life last night. But I was sleeping less than 300 yards from where Donald Trump sleeps. Could there be a connection?’ Perhaps as well as his many other crimes, misdemeanours and general incipient fascism, Trump is also beaming invisible rays to disrupt the sleep of innocent progressives.

Trump Derangement Syndrome has so overtaken the denizens of studio, theatre, film set and publishing house that they find it difficult to read a menu without finding evidence of Trumpian fascism. Incredibly the fact that Trump got two scoops of ice cream when everyone else got only one was an actual news item on CNN. We can be relieved that the American media still values cutting edge investigative journalism and knows how to courageously speak truth to power.

Take luvvies seriously, especially the autocue readers on British television news, and you will be convinced that the USA is plunging into a dystopian quagmire. Be reassured, it isn’t. Dystopia requires planning. Consider the firings, replacements, gaffes, blunders, leaks and general chaos of the Trump presidency; is this really the hallmark of a mastermind bent on subverting the USA and turning it into a jackbooted fascist state?

Luvvies are convinced America is only an executive order away from concentration camps in Colorado and black-clad police coming to chain women to kitchen sinks. They truly believe that when George Orwell wrote Nineteen Eighty-Four he was envisaging the future of a Trumpian USA.

Robert Schenkkan, Pulitzer Prize and Tony Award winner, has written a new play about Trump’s concentration camps. In Building the Wall a concentration camp commandant is interviewed in prison after being sentenced for atrocities perpetrated against immigrants rounded up under Trump’s orders. The play is set in 2019. So, nothing overstated there.

Shaw’s Heartbreak House, a caustically comic play set in the Sussex of 1914 about a house full of bickering guests was revived by Hartford Stage in Connecticut. In the preface Shaw described one of the characters Boss Mangan, a wicked businessman. Mangan is one of those ‘poor devils’ who became rich ‘by placing their personal interests before those of the country’ and thus proved ‘not only that they were useless for public work, but that in a well-ordered nation they would never have been allowed to control private enterprise’.

It does not take a genius to work out how Mangan was portrayed. The stuffy and stupid Mangan came on stage replete with hideous yellow comb-over, squinty eyes and smoothly rounded belly covered by a three-piece suit. As the New York Times approvingly described it, ‘The Trumpification of Mangan is the revival’s grand gesture’.

Rossini is a prophet also. Writing of a performance of The Barber of Seville at the Metropolitan Opera a mere two days before Trump’s inauguration, New York Times critic Anthony Tommasino opined: ‘But suddenly, amid charges of ‘fake news’, outrageously untrue reports going viral and brazen lies, Rossini’s 200-year-old opera seemed eerily contemporary. Basilio came across as the operatic prototype of a cynical, modern-day political operative whose repertory of dirty tricks has hardly dated’.

It goes on. In the opinion of Robert De Niro, Trump is, ‘totally nuts’. Which at least is better than Cher who has gone on Twitter about Trump calling him ‘ a pathological liar,’ ‘a racist,’ ‘a fascist,’ and ‘disgusting and despicable.’ In one of her more deranged moments, she even compared Trump to Hitler. This was perhaps to go one better than Richard Gere who compared Trump to Mussolini. ‘Here’s a guy who’s obviously Mussolini’. In Gere’s fervid imagination Trump will ‘get rid of Jews, the blacks’.

What is it with luvvies and concentration camps? Is there some deep seated psychological flaw in the character of those who make their living pretending to be someone else which makes them both fear and long for incarceration?
These stage struck freedom fighters see themselves as leaders of the ‘resistance’. After all, attacking Trump in a speech before a crowd of cheering sycophants at an awards ceremony counts as an act of courage for someone who once impersonated a soldier on screen.

Much more likely is the simple answer provided by British actor David Harewood who said, ‘any attempt to bash Trump is good’. When you have an audience willing to tell you that you are brave and courageous by appealing to their prejudices, then anything goes.

They should listen to down-to-earth actor Mark Wahlberg who advises celebrities to stay out of political posturing. ‘A lot of Hollywood is living in a bubble. They’re pretty out of touch with the common person, the everyday guy out there providing for their family’.