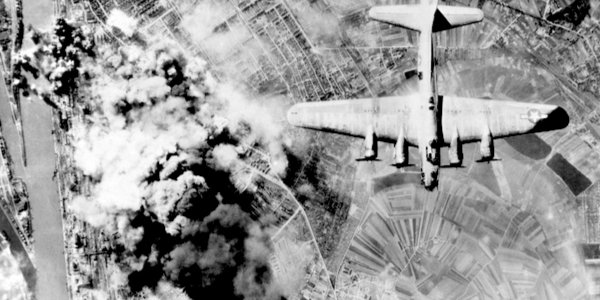 BRITAIN’S area bombing offensive against Germany during the Second World War has never ceased to be controversial, with opinion still bitterly divided over its merits or otherwise.

The campaign began in earnest 80 years ago tonight, on May 30, 1942, when the RAF launched its first 1,000-bomber raid targeting Cologne.

The massive aerial assault was the Air Force’s biggest use so far of its new strategy of area bombing. Rather than attacking only conventional military objectives such as factories, docks or railway yards, planes would now also drop high explosives and incendiaries across huge swathes of civilian districts.

The stated aim was to destroy the homes of industrial workers, whose labour was enabling the German war machine to function. The idea was that ‘de-housing’ the population and making life intolerable would break their morale, leading to a revolt against Hitler which would end the war.

However, this explanation for the switch in strategy was not the whole story. In reality, the move had been forced on the RAF because navigational and aiming technology was not good enough to locate and destroy precision targets even in daylight. Trying to do so had led to the loss of many men and aircraft. The only alternative was to attack whole cities at night.

After ordering initial area raids on Rostock and Lubeck, the irascible, pugnacious 49-year-old commander scraped together 1,047 aircraft for the attack on Cologne.

About 1,500 tons of bombs were dropped on the city, setting it ablaze. Remarkably, only around 460 people were killed and 5,000 injured, but some 13,000 homes were destroyed or damaged, along with 300 industrial installations and 2,500 commercial premises. Forty-four bombers failed to return from Cologne.

With its unprecedented number of aircraft, the operation was a massive propaganda coup for the Allied cause and a boost for war-weary Britons. Germany was being given a taste of its own medicine after the Luftwaffe’s blitz in 1940-1941 had killed 40,000 civilians here.

In early 1942, with the war effort elsewhere stalled or going badly, bombing was Britain’s only effective way of hitting back at the Third Reich. The victories against Germany at Alamein and Stalingrad were yet to happen, the Japanese were conquering the Far East and Pacific, while U-boats threatened to cut off Britain’s Atlantic convoy lifeline.

Despite opposition, Harris used the Cologne raid to argue successfully that the air offensive should continue with increased intensity. He believed obsessively that the war could be won solely by mass bombing, avoiding costly land battles. If city after city was wiped off the map, Germany would eventually collapse, he said.

In a filmed broadcast after the attack on Cologne, Harris used a Biblical quotation, saying the Germans had sown the wind ‘and now they are going to reap the whirlwind’.

Reap the whirlwind they did. Thousand-bomber raids on Essen and Bremen followed in June 1942. Then, as more heavy bombers such as the Lancaster came into service, the RAF methodically pounded and burned German cities until the end of the European war in May 1945.

While others equivocated about area bombing, Harris did not mince words. In 1943, after the US Air Force had joined the campaign with its daylight operations, he wrote to Air Marshal Charles Portal, Chief of the Air Staff: ‘The aim of the Combined Bomber Offensive should be unambiguously and publicly stated. That aim is the destruction of German cities, the killing of German workers, and the disruption of civilised life throughout Germany.’

Although the highest European bombing death toll – around 42,000 – was in Hamburg in 1943, it was the attack on Dresden in February 1945 that ignited most controversy. Waves of British and American bombers raised a firestorm, destroying much of the city – a centre of German art, architecture and culture – and killing around 25,000.

The Soviets had asked the Allies to attack Dresden as the Red Army pursued retreating German forces westwards towards the city, and it was seen as a legitimate target. But critics would later argue that Dresden had little military significance, was packed with refugees, and was only lightly defended. They also claimed that destroying cities when the war was virtually won was senseless.

Amid the backlash, Prime Minister Winston Churchill sought to distance himself from the bombing strategy he had approved, writing in a memo: ‘It seems to me that the moment has come when the question of bombing of German cities simply for the sake of increasing the terror, though under other pretexts, should be reviewed.’

‘To my mind we have absolutely no right to give them up unless it is certain that they will not have this effect. I do not personally regard the whole of the remaining cities of Germany as worth the bones of one British Grenadier.’

Harris’s phrase deliberately echoed German Chancellor Otto von Bismarck’s 1876 remark that ‘the whole of the Balkans is not worth the healthy bones of a single Pomeranian grenadier’.

Churchill later rewrote the memo to remove the implied criticism of the RAF. But the damage was done.

Area bombing did not lead to a dramatic German collapse, but there is no doubt it sapped morale. Industrial production was not seriously impaired until the latter months of the war, but the raids tied down defensive fighter planes and artillery and kept thousands of soldiers from the battlefronts.

The question that looms largest, of course, is over the deaths of so many German civilians – not that the deaths of British civilians had bothered the Nazis during the Blitz.

While the bombing campaign was still in progress, it was criticised by some prominent figures in Britain, such as George Bell, Bishop of Chichester, and Labour MP Rhys Davies.

However, Harris saw it as the harsh logic of total war, where whole populations were working towards supplying and maintaining the military effort and thus could be considered legitimate targets.

Debate about the bombing campaign has ebbed and flowed since the end of the war. At the extremes of opinion, Harris and his air crews have been condemned in some quarters as war criminals, which they categorically were not.

The German author Jörg Friedrich brought the issue back into the spotlight 20 years ago with his books The Fire: The Bombing of Germany 1940-1945 (2002)and Places of Fire: The Sites of the Bombing War (2003).

He pulled no punches about the suffering of civilians in the Allied air raids, with graphic accounts and pictures. You would not be human if you did not feel pity.

However, it must not be forgotten that an imperative of the Allied war effort was the destruction of the Nazi regime. Hitler and his cohorts were waging a merciless campaign of conquest and annihilation, while aiming to wipe out a whole race via industrialised murder. Such a unique evil had to be eradicated, regardless of the cost.

While I was putting this article together, I happened to watch a repeat of Auschwitz: The Nazis and the Final Solution (2005) on the Yesterday Channel.

It reminded me that as area bombing started in 1942, the Germans were already implementing the Holocaust, rounding up Jewish men, women and children from all parts of Europe and deporting them in cattle trucks to the extermination camps – the first of millions who would die.

Particularly harrowing in the TV documentary was the story of how in August 1942, 4,100 Jewish children, some as young as two, were separated from their parents in Paris and transported to Auschwitz-Birkenau, where they were murdered.

I am not trying to give a different value to different deaths. All were tragic. But if the images of German civilians in Friedrich’s books were shocking, the thought of those little innocents being pushed into the gas chamber was unbearable.

This may be a simplistic view, but after seeing that episode, I thought that if the area bombing campaign had helped shorten the monstrous rule of the Nazis by even one day, then it was worth it.

After the war, Harris and his bomber crews were for the most part marginalised. The exploits of the men who had taken the war to Germany in Britain’s darkest days, who had put their lives on the line when no other weapon was available, were now regarded with distaste in some circles.

In recent years, that travesty has gone some way to being redressed, but it came too late for most veterans. And there are still many historians who regard the whole area bombing operation as misbegotten.

They are entitled to their views. But whatever the perceived rights or wrongs, nothing can detract from the courage, devotion to duty and the great sacrifice of the Bomber Boys. I for one salute them, as I hope many others do.

As Harris wrote in tribute to his men: ‘There are no words with which I can do justice to the air crews who fought under my command. There is no parallel in wartime to such courage and determination in the face of danger over so prolonged a period, of danger which at times was so great that scarcely one man in three could expect to survive.’