Equality’s for the chosen few here on Animal Farm 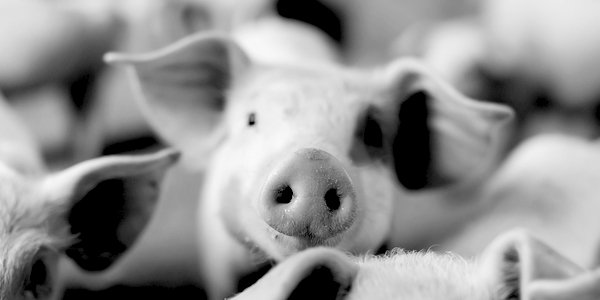 Remember the bit in Animal Farm where the pigs put the new Seven Commandments on the wall, and according to the seventh, ‘all animals are equal’? Just like the 2010 Equality Act, outlawing all forms of discrimination. Real progressive social change, even down on the farm.

But later in the book the pigs amended the seventh commandment, adding ‘but some animals are more equal than others’. Just like the amendments to the 2010 Act, whereby the Nine Protected Characteristics were added, identifying those categories which are now, under law, just a bit more equal than the rest of us. This doesn’t seem always to work out fairly. There are examples of the Act having a negative impact on individuals without protected characteristics. How about this?

British biker Liam Bradley was ordered to remove his open crash helmet at a petrol station while a woman in a burka beside him was allowed to fill up without complaint. Bradley’s face was fully visible and he was well known to the staff. But he reckons that men wearing helmets, balaclavas, or even ski masks are routinely prevented from wearing such headgear in public – they’re not ‘protected’, you see – while a burka-clad woman has carte blanche (voile noire?) Double standards or just the trickiness of the Act and its Protections?

I couldn’t see that this was fair, so I went to the Act.

According to government guidance, the Equality Act 2010 legally protects people from discrimination in the workplace and in wider society. It replaced previous anti-discrimination laws, such as those relating to sex, disability and race, with a single statute to simplify and strengthen protection. Its basic framework is extremely wide-ranging, covering not just workplace issues, but also, inter alia: changing the definition of gender-reassignment; protection for breast-feeding mothers; and the big one: providing protection for all those with ‘protected characteristics’.

As Citizens Advice explains, the Act and its Protections mean you are protected from discrimination by employers, businesses, health care providers, housing suppliers, education providers, transport providers, and public bodies. Any discrimination which occurs because of one or more of the Nine is unlawful, and even if you are disadvantaged because any family or friends can be classified as among the Nine, this is discrimination by association, and you have rights.

This is massive, and I find the real-world implications worrying. In many instances, equality protection based on one of the Nine is totally contradicted by protection under another. And in some cases, this contradiction is deemed to be infused with ‘cultural sensitivities’, which leads to a reluctance to uphold basic UK law.

Let me elaborate. In the Northern Ireland bakers’ case, Ashers Baking Co refused to produce a cake, ordered by a gay activist in 2014 to be decorated with the slogan ‘Support Gay Marriage’. As committed Christians, the owners refused to act contrary to their deeply held religious beliefs. In this case, protection under religious belief and that under sexual orientation clashed head-on. The courts are still deliberating as to whether one of the Nine should have priority over another. Meanwhile, lawyers on both sides are coining it.

There is also the question of the cultural ‘rights’ of immigrant groups to continue with their imported values and laws – frequently in violation of UK law – without any police or legal intervention. Various aspects come to mind: the known practice of FGM, where not a single successful prosecution has been launched in the UK in spite of clear recognition that it goes on; the 20-year reluctance of police forces to intervene in the widespread sexual abuse of young white girls by mainly Muslim ‘grooming gangs’; the acceptance of polygamy, and even funding it through the welfare state, and non-intervention in what should be deemed hate crimes by those who defile Remembrance and similar occasions by burning flags and shouting anti-British slogans.

And what about the humane slaughter of animals? Without any public consultation, many (all?) supermarkets, schools and hospitals now sell or use meat which has been halal slaughtered. There have even been instructions sent home by head teachers that pupils shouldn’t bring pork-based items to school in their packed lunches for fear of offending ‘other’ pupils. A school in Oxfordshire enraged parents by banning packed lunches, choosing instead to only serve ‘healthy halal meat, gluten-free food, and salads’.

This all suggests that given the rights of the Protected Nine, the local traditional interest is ranked second, and all progressive changes are a priority.

A socialist society is characterised by central planning, in theory to ensure the best outcome for that society as a whole. But since any society comprises individuals with objectives and desires that may not reflect those of the central authority, then the rights and interests of the individual must come second to those of the whole, which leads to the ultimate necessity of denying the individual personal choice, if necessary by force, which in itself is a repudiation of democratic principles. And there will always be those who are in control, who are above the routine strictures, who are the ‘protected ones’: the Nomenklatura.

My understanding of the Equality Act 2010, together with its Nine Protected Characteristics, is that its nature was not accidental, or poorly drafted, or even ignorant of possible unintended consequences. It was always quite deliberate. It has afforded government and judiciary the opportunity to discredit tradition, silence opposition, rewrite history and oppress the majority. It has enabled a new Nomenklatura to recreate society in a thoroughly undemocratic way. It is – pure and simple – the roadmap to Animal Farm.