NewsPaperthe art of publishing
HomeCOVID-19Exclusive: An interview with Fauci’s nemesis
1

Exclusive: An interview with Fauci’s nemesis 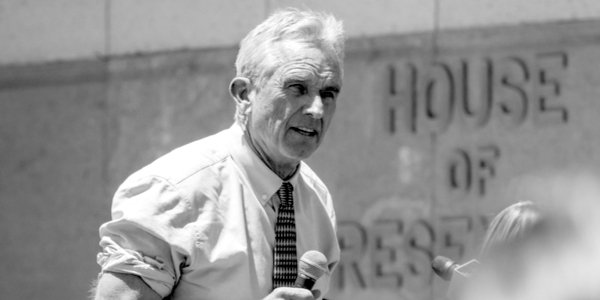 THE Real Anthony Fauci, a number-one best-selling book by Robert F Kennedy Jnr, is so explosive you wonder how it got past the lawyers at Skyhorse Publishing.

Skyhorse, launched in 2006 by Tony Lyons and a subsidiary of literary giants Simon and Schuster, are not afraid to challenge authority and explore alternative narratives but cannot afford to upset their parent company who would be furious if their 100-year-old reputation was damaged. Therefore, RFK’s information, however seemingly defamatory, had to be solid and able to stand up to legal challenge.

Robert Kennedy Jnr – the son of Democrat Robert ‘Bobby’ Kennedy who served as US Attorney General in the early 1960s under his brother John F Kennedy’s administration – is a successful lawyer like his father was. This means every accusation levelled at Fauci, the 80-year-old chief medical adviser to the President of the United States, is fully referenced and backed by scientific papers and credible medical professionals. Dr Robert Malone, inventor of the mRNA technology used in Pfizer and Moderna’s Covid jabs, edited it twice.

The list of the book’s contributing doctors and scientists includes many who have spent their lives developing or advocating vaccines but find themselves appalled by the damage wreaked by experimental Covid jabs.

Many names from this international community welcomed the chance to reiterate their views, including Dr Tess Lawrie in the UK, an advocate for early Covid treatments such as ivermectin; former Bill and Melinda Gates Foundation vaccine developer Dr Geert Vanden Bossche, who says vaccinating during a pandemic is a recipe for disaster; former British Pfizer vice-president and Covid response critic Dr Mike Yeadon; and Dr Peter McCullough, the US’s foremost cardiac authority. They all spoke to Kennedy and are quoted in the book, full title: The Real Anthony Fauci: Bill Gates, Big Pharma and the Global War on Democracy and Public Health.

It is a riveting read that leaves you slack-jawed at the sheer recklessness of the vaccine rollout. It is also an invaluable source of reference material to all those following the alternative narrative.

I caught up with Kennedy last week and found out why a legal challenge from Fauci or Gates would make him extremely happy.

SB: Have you received any legal challenges from Anthony Fauci or Bill Gates?

RFK: There is nothing in that book that is untruthful. Secondly, I would welcome a lawsuit from Bill Gates and Tony Fauci, and they know that that would be a giant strategic mistake. Even if I did put something in that book that was defamatory, I don’t think they would challenge it. They’ve got so much to lose from the truth. Their only viable strategy is silence.

SB: What kind of reaction have you had from MSM?

RFK: There’s no reviews in the papers [despite the book’s No 1 best-seller status]. I am now being targeted with a barrage of ad hominem articles about me, but they don’t even mention the book, which is weird. They do not want to talk about this book because it’s full of truth. The truth is their deadliest enemy.

SB: Have you ever met either Fauci or Gates?

RFK: I’ve met Tony Fauci. Our paths have crossed for many years. I’ve been working on vaccine issues since 2005 so I’ve seen him in action on many occasions.

In 2016, President Trump asked me to run a vaccine safety commission. To do that I had a series of meetings with the regulatory leadership including Fauci and Gates. One of my challenges to them was to say: ‘You have never done a single double-blind placebo-controlled trial for any of the 72 recommended vaccines being given to children.’ Publicly, Fauci was saying I had not been telling the truth about this. I said to him: ‘Show me one trial for any of those 72 jabs.’ He made a show of looking through the files he’d brought with him. He said: ‘We don’t have them here; we’ll send them to you.’ He never did send them to me and a year later I sued them. We filed a suit asking them to show us any of those studies they had and after a year of litigation they came back and said we don’t have any.

Ironically, Fauci is now saying that he can’t use ivermectin or hydroxychloroquine to treat Covid without back-up from a double-blind placebo-controlled trials.

SB: The impression I get of Fauci is that he knows what to say in public but he seems like he has a dark side to him. The only reason for providing toxic drugs to people, like remdesivir, that has been so harmful to people with Covid, is because you know many who receive it will die. Does he know that?

RFK: Of course he does. He had remdesivir in a study in Africa to see if it worked against Ebola. In 2019, the Data and Safety Monitoring Review Board (DSMB) monitored his work. Two months later, the board was saying it’s not safe, it’s killing people. It’s produced by the pharmaceutical company Gilead which Bill Gates has a huge stake in. Coronavirus does not kill 50 per cent of people who get it whereas trials show that over 50 per cent of people treated with remdesivir died.

SB: In your book you talk about two types of scientists, those who allow Fauci to dictate their careers and those who don’t want to be compromised, but he seems to be very effective at crushing dissent.

RFK: Between him, Gates and Jeremy Farrar, director of the Wellcome Trust [part of the Trust’s £29.1billion annual budget comes from Gates], they control 61 per cent of the biomedical research on earth, so they control pretty much what gets funded. Also, that funding power gives them the power to kill studies they do not want and to ruin scientists who are trying to do those studies and to bankrupt universities. I show how that works in the book. If you had a young scientist at let’s say UCLA Medical School, [University of California, Los Angeles] who says why don’t we study whether the vaccines are causing injury by doing a cluster analysis of medical records? That’s an easy study to do. His dean will get a call from one of Tony Fauci’s flunkeys at the NIH [National Institutes of Health run by Fauci] saying you’d better stop that guy from doing the study, Tony doesn’t want it done. UCLA, like all the medical schools in this country, is getting hundreds of millions of dollars from Fauci and the NIH and are completely dependent on the royalties from pharmaceutical products that Fauci develops in his lab, farms out to the universities for phase 1 and phase 2 trials, then brings in a pharmaceutical company to produce the drug who then shares the patent with the university. Everybody is on the hook; everybody is making money and all of them have a huge incentive not to talk.

Tomorrow we examine the sensational findings of RFK’s book.