NewsPaperthe art of publishing
HomeNewsFailed by the feminists, the brave women of Iran
161

Failed by the feminists, the brave women of Iran 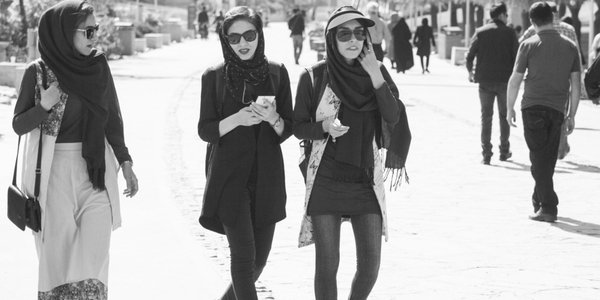 With more than 60 per cent of its population under 30, high levels of education combined with high unemployment and economic breakdown, the stage has been set for civil conflict in Iran.

But the roots of the conflict lie much deeper. The harrowing story of Nazarin Zaghari Ratcliffe, a British-Iranian citizen, thrown into prison on cooked-up charges while taking her infant daughter to see her family, is the tip of the iceberg.

In Iran there are no outlets for free speech, for influencing policy, or for independent economic enterprise. Everything is controlled by a theocratic, fundamentalist Islamic State.

Its rate of executions is second only to China. Relationships must conform to the template set down by Shariah. Homosexual behaviour, adultery, sex outside marriage, all incur severe punishments including beatings and death.

But the greatest demonstration of Iran’s fundamentalism is its misogyny.

A woman’s testimony in court is worth half of a man’s. Women may not bring lawsuits if they are raped unless they have four witnesses. They do not receive the same amount of inheritance as their male relatives. Girls as young as nine may not object if their parents marry them off.

Every aspect of women’s lives is regulated. This includes where they can live, what they can study. Whether or not they can work.

The symbol of female suppression is the compulsory wearing of the hijab. Visitors to the country must also comply. It is enforced through lashings, fines, even imprisonment and is rigorously patrolled by the morality police.

This level of suppression means that individual acts of freedom – such as not wearing the hijab, riding a bicycle or dancing – become acts of resistance and are powerful. Women’s acts of defiance reflect the regime’s weakness – and are punishable. But that does not stop the women of Iran.

In the recent protests women have been waving their hijabs on sticks. These are both veiled and unveiled women, for this is not a rebellion against the hijab. It is a protest for freedom of choice.

And they have been arrested and imprisoned as a result.

They do not ask for feminists from outside to come and rescue them. An activist explains: ‘Iranian women are brave enough and can stand up for themselves.’

However they would like feminists to stop lending the fundamentalist theocratic regime their support.

For example, when Swedish feminist delegates came, wielding the power to sign trade agreements, they all wore the hijab in what has been dubbed ‘the walk of shame’.

When Muslim fundamentalists tried to stop Maryam Namazie, a human rights campaigner, from speaking at Goldsmiths, University of London, just guess to whom the feminists lent their support. Feminists are shockingly silent in their defence of Iranian women. They don stars and stripes hijabs over pussy hats in some perverse symbolic compilation. They come out in support of that apologist for Shariah, Linda Sarsour.

For what bothers feminists more than the rights of these women is the risk of the label ‘Islamophobe’.

What most distinguishes these Iranian women’s struggle from a feminist struggle is that the demands they are making on the regime are not for themselves. Rather their focus is on liberating the whole country. And to do that they recognise that they need to eliminate the clerical regime. They fight for this willingly and at great cost to themselves.

And when women are really fighting patriarchy they don’t make enemies of their men, but support them. And men give them their sacrifice and support in return.

So as in any protest or revolution which involves significant personal risk, men tend to be dominant. But in Iran women are also highly involved. Of the 8,000 protesters arrested, large numbers have been women.

This is not new. For over 150 years women have played leading roles in Iran’s freedom movement and they continue to do so at great personal risk. Encouraged to form hundreds of resistance councils across all major cities, they are fomenting protests to ensure that the rebellion goes on. They lead street protests and when women are stopped for not wearing a veil they physically defend them. When protesters are arrested, they protest further and ensure that the victims and families have their support.

All this takes courage. This is not the bleating ‘courage’ of a #MeToo affirmation. Women risk beatings, indefinite imprisonment, torture, rape and death. These are not idle threats but everyday realities in which the regime have form. At least 82 women have been executed since 2013 and certainly in the past executions involved compulsory rape. Many women languish in prison, unable to see their families, not allowed medical treatment and not knowing whether they will ever come out.

The self-sacrifice, hardship and suffering which women experience in traditional societies gives their voice moral authority.

Let’s hope we never need a regime change in this country, because we would not be able to do it. Thanks to feminism, women have lost all moral authority. Supportive private networks will be weaker through the employment of women. Self-sacrifice is anathema. And while Iranian women’s unemployment may ironically give them a modicum of state independence, feminist erosion of the family means that independence from the state has been all but utterly destroyed.

The courage of these women is an example to all of us. Fundamentalist Islam would receive a major blow if their effort is successful, and we would benefit the world over. We should salute these Iranian women and their husbands, brothers, sons who are all supporting them. And we, too, should give them our support.