For your child’s Christmas presents, less is more 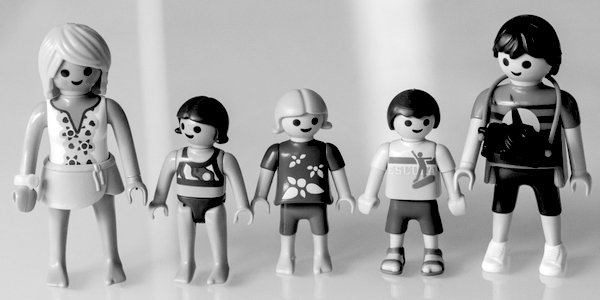 Mothers: I am sure many of you have recollections of your own play-dates from hell. Shall we share? Here is one of mine. When my eldest daughter was three she was mad keen on a boy at her nursery so I asked for a play-date. My daughter was really excited the night before. She was shy and I could tell it meant a lot to her. On the morning we set out we didn’t talk at all. She was quiet and happy. I think she had some ideas about what they would do together.

We got there – and it was misery from the start. A very large television was on in the living room. It was impossible not to stare at Upsy Daisy or whoever was on. Jimmy’s mum suggested he turn the TV off. (Suggested.) He wasn’t in the mood to do so, so I asked him if he would show my daughter his room. She wanted me to come so off we went. There I saw it all. Strewn all over the floor – easily 100, 200 things – plastic dinosaurs, farm animals, planes, tractors, machinery, pieces of train set, bits of Lego, Playmobil characters, Star Wars, bricks. Just all over – you couldn’t tiptoe between all the pieces. I cast around for an idea. But it was impossible to start. Gather together the dinosaurs? Piece together the train set? None of us knew where to start or what to do. I tried cheerfully leaving the pair of them to work it out for themselves. But after a couple of minutes they trudged downstairs.

For a few minutes we sat staring at the television again. My daughter, doggedly trying to make sense of the occasion, asked me what was happening on the screen and I started to pick up the story for her and Jimmy. About two minutes in Jimmy stood up, grabbed the remote, and turned the TV off. I suggested we read a book. I got one, settled them both down, and got going. Once again my daughter settled in to listen and smiled happily at her little friend. Maybe this was going to work at last. Two minutes in, Jimmy got up and switched the TV back on. Now I could see my daughter getting stressed and confused. I had absolutely no idea what to do next or how to make this thing work. Jimmy’s mum was in the kitchen busying herself with his baby brother. But too close for me to have a stiff word with Jimmy and yank the TV remote out of his hands.

You know what? I just got out of there. I said my daughter was crying because she was sick. We had to leave now! We were home before we knew it and I was depressed. I felt sorry for my little girl – and I felt sorry for Jimmy. I guess he was soon back in front of the TV.

Anyway the point of the story is what not to get your kids for Christmas. And the answer is: try to avoid getting too much stuff. Because what happened to Jimmy by the age of three slowly happened to my girls. When they had one or two dolls, they gave them names and played with them lovingly. But when after a few Christmases they had a stack of them in the corner, they lost interest. When my little girls got going with Playmobil we built it up slowly and they cared for each little piece they had. They played coherent games with coherent sets. But then someone (kindly) gave us a huge box of the stuff. It was really all over from that moment. There was such a mountain of it that it was hard for them to find the pieces they wanted to play with, or work out what game to play. Even if I endlessly got down on the floor and sorted it into separate shoeboxes . . .

Chuck some of it out, you say? Absolutely. But however you can, slow down its arrival. Coherence is king. Two or three sets of Playmobil are better than a mountainous box of pirates, princesses, and working women complete with stethoscopes and pick-axes. Christmas and birthdays, build on the sets. I recommend a maximum of six Barbies per child. Each Christmas, get Barbie clothes. Get a train track. You can grow that over the years. Do not get Sylvanians and Playmobil and Lego Friends . . . that’s a recipe for plastic soup. If you have started on Playmobil but your kid opens up Lego Friends from Grandma, inch it towards a cupboard or high shelf. Chuck it out in three months. Give Grandma clear instructions. Be strict.

Plastic toys are very cheap so all this is ridiculously hard. Toys come at you from all directions – the school fair needs you to support the tombola; the kind old lady at church has popped in to Primark and picked up a 50p toy – yes, 50p. Your kid will go to a birthday party and come back with a large Build-a-Bear and a party bag with more plastic.

Free play is very important for small children. Plastic soup does not facilitate free play. I tried very hard to slow it all down. All you can do is try.