Fred Dibnah and his working-class heroes 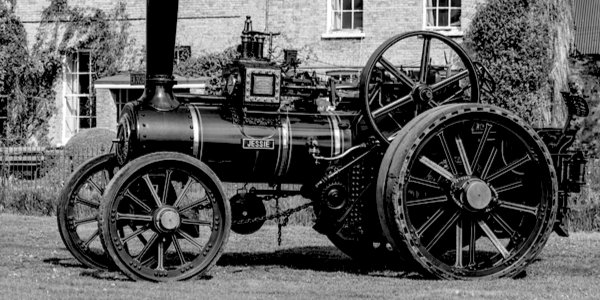 TRAWLING through the TV channels the other day, I happened upon a repeat of Fred Dibnah’s Made in Britain.

I’d seen the series before, and it was like meeting an old friend. And with the world nearly two years into the Covid madness, watching it was a welcome comfort blanket, harking back to a time when life was simpler and something like normal.

First broadcast in 2005 on the BBC, the 12-part documentary featured Fred chugging and clanking along in his self-restored, steam-powered traction engine, visiting workshops and factories in the North of England, Scotland and North Wales where old-style industries were surviving. It was the last such trip the world’s best-known steeplejack made before his death from bladder cancer at the age of 66 in November 2004.

His itinerary took in an iron foundry, a steel mill, a forge, an iron ore mine, a copper mine, a slate mine, a chainmaker, boilermaker, metal spinner, pattern maker, rivet manufacturer and other heavy-metal industries that had somehow escaped modernisation, rationalisation and extinction.

It was a glimpse into an erstwhile world where measurements were still done in inches, where workers wore boilersuits and flat caps, not hard hats and hi-viz vests, where the boss might have sported a collar and tie, but mucked in to get the job done. And yes, where health and safety wasn’t a cult.

But, tempting as it is to romanticise, working with molten metal, steam hammers, grinding wheels, overhead cranes, pumps, buzz-saws, pistons, forges and furnaces was hard graft. It was often hot, dirty, noisy and sometimes dangerous, with lots of lifting and shifting, heaving and straining, amid smoke and dust. Namby-pamby that I am, I wouldn’t have lasted five minutes in such places.

In most cases, the hours were long, the conditions were basic and the pay probably wasn’t up to much. But you could see the satisfaction those blokes got from the fact that they were actually still making something in a country that by and large had lost its manufacturing base.

Most impressive for me was a rather more delicate task than the grit and grime jobs – the pattern maker, shaping wood into perfect replicas of items to be pressed into sand to make a mould for cast iron. But it wasn’t straightforward. You had to make the pattern slightly bigger than the final required size to allow for shrinkage when the liquid metal cooled.

Apparently though, not all metals shrink equally. They may differ by a few thousandths of an inch. It was a job for a steady hand, a keen eye and an instinctive ‘feel’ for whether you were doing it right. I presume it’s now all done by computer.

Elsewhere, there was the task of filling the mould at the foundry, with sweating men delicately handling heavy ladles of molten iron. In other workshops, we saw metal plating being riveted with a power-hammer, white-hot steel rods being hand-forged into a chain and a copper disc being spun and trimmed on a wheel lathe to produce a magnificent bowl.

During his epic journey, Fred had to get some running repairs done on his ailing traction engine. He called in a grizzled old engineer pal and they both peered down a cylinder that wasn’t producing much power.

After a few knowledgeable ums, ahs and ayes, and a feel around the offending area with their fingers, the mutual verdict was reached – on its extreme upward stroke, the piston head was partially blocking the steam inlet port.

The piston needed a quarter-inch skimming off it. Of course it did. Anyone could tell that just by looking at it. Anyone with a lifetime’s experience, that is. Wonderful stuff to watch.

Along with millions of others, I loved Fred Dibnah’s programmes because they were not dumbed-down or tarted up. They were unashamedly nostalgic and unashamedly British – and Fred spoke plain English, livened by the odd oath or two, with that lovely rolling Bolton accent.

Today such a format – with swear words, absence of ‘diversity’ and an alarming lack of risk assessments – wouldn’t get a look-in at the woke BBC.

If it was remade, it would inevitably be called The Great British Steam-Off or something similarly stupid. The participants would be suitably ‘inclusive’ and the action would be interspersed with self-satisfied ‘experts’ talking down to us in five-second clips.

But I rant. Watching the series got me thinking if any of those workplaces Fred visited in 2004 were still around, or had they all vanished like a wisp of steam?  I’m pleased to report that a quick sweep of the internet showed at least 11 are still operating in some shape or form.

The various museums and heritage centres, such as the Ffestiniog and Severn Valley railways, where Fred saw engines and machinery being restored and the old skills passed on to a younger generation, are still going strong.

And if that’s not worth an appreciative toot on his steam whistle from Fred as he trundles his traction engine through the Pearly Gates, I don’t know what is.