Germans flag up their anti-Right credentials 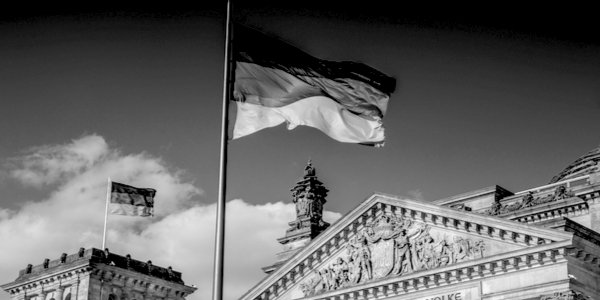 GERMANY has a bit of a thing about flags. And no, I don’t just mean that flag.

The swastika has long been banned in the Bundesrepublik (though it has recently been permitted in video games). Other symbols related to the Third Reich and Nazism are similarly verboten: the sig (‘SS’) rune, the Celtic cross and the Totenkopf (death’s head) of ‘Hans, are we the baddies?‘ fame, to name just a few.

Contrastingly, the flags of the European Union and of foreign states are protected by a recent law in Germany, which stipulates that any burning of these can land the pyromaniacal protester in prison for three years. This law was introduced after the Israeli flag was burnt at a protest.

To me, anyone burning a flag looks unhinged – it has a whiff of the bashing-sandals-against-felled-statues about it – so let the headbangers carry on, I say.

However, another flag – or rather set of flags – has come into the cross-hairs of the ever-vigilant German state.

and Reichskriegsflaggen (imperial war flags; this picture is an example)

are soon to be forbidden from being displayed in public. Although some states have already moved to make their display illegal in certain contexts, the federal government has entered the fray.

The black-white-red, as the Germans call it, has come under greater official condemnation in recent months. This reached a fever pitch last August when the Reichstag was supposedly ‘stormed’ by ‘Right-wingers’; an act which was dubbed ‘an unbearable attack on the heart of our democracy‘ by senior politicians. That the protesters were content to stand on the stairs of the building instead of running riot in a violent coup makes the event strangely similar to January’s ‘storm of the Capitol’ in Washington DC, which must rank among the least convincing insurrections in recorded history.

Nevertheless, the establishment propaganda machine never misses a chance. While Germany generally turns a blind eye to Left-wing radicalism, for historical reasons it is hyper-vigilant about the Right.

According to German press reports, the flags are now used by a various assortment of ‘Covid-deniers, Reichsbürger [those who reject the legitimacy of the modern German state and want the nation’s pre-World War II borders reinstated] and Right-wing extremists’. This, it seems, is enough for a ban to be enacted. Perhaps the accusations are true, but my ‘fake news’ antenna gets a touch sensitive when accusations about those dastardly Right-wingers are thrown about. After all, the problem with the accusations of the Left is that they have lost all clout. Being called a fascist or a Nazi stings the first few times. By the thousandth time it barely registers on the give-a-damn-ometer.

I have little doubt that there are unsavoury elements using the imagery of Imperial Germany. Those who are unable to use the swastika will have migrated to various other symbols such as these. However, I am not convinced that the ban makes any sense. There is the practical point: if you ban the flags of Kaiser-era Germany, there are plenty of other flags to choose from for the would-be protester. Will the German state pursue Right-wing dissidents through the annals, banning flags and standards of long-dead Germanic kingdoms? Will the flag of the Holy Roman Empire one day be verboten, along with the flag of the Free State of Prussia and the black-and-white Nordic Cross of the Teutonic Order?

Perhaps. Modern governments have little inclination to protect history; knee-jerk responses are far more within the scope of their abilities.

More to the point: although you can ban symbols and imagery you cannot ban ideas, nor can you outlaw citizens’ concerns. The German establishment labours under the delusion that by forbidding the use of certain emblems it will somehow engineer the political landscape in its favour. No doubt they will profess to be protecting Germany’s history – not that the Kaiserreich was exactly some kind of peaceful antediluvian state – but in effect they are condemning further stretches of Germany’s past in an attempt to shore up its contemporary position.

If the politicians of the Bundesrepublik were at all bothered about alleviating the growing problems in the country they might do something other than yelling ‘fascist’ and banning more things. That would, however, require their government to recognise the catastrophic missteps it has taken in recent years, most notably in 2015’s opening of Europe’s borders to all and sundry across the world. Such an admission will, of course, never happen.

After all, clumsily dealing with a few of the more pronounced symptoms of discontent and forever ignoring their root cause is the modus operandi of the modern Western state.