IN recent notes for The Conservative Woman, I described the UK’s in effect unilateral zero emissions target as ‘futile gesture politics’, and concluded that international initiatives to ‘control’ climate change by curbing CO2 emissions cannot succeed. In this brief background piece I discuss the main policy developments behind our ‘decarbonisation’ policies: how have we got to where we are now.

As a member of the EU, the UK has, of course, been subject to the EU’s climate policy. The EU has undertaken many climate-related initiatives since 1991, when it issued the first Community strategy to limit carbon dioxide (CO2) emissions and improve energy efficiency. Later, the EU was an active participant in the Kyoto climate change conference in 1997, signing the Kyoto Protocol by which the EU committed to an 8 per cent decrease in emissions between 1990 and 2008-2012. The EU and its member states have met this commitment, according to the European Commission. The Kyoto Protocol’s second commitment period was agreed at the Doha conference in 2012. The EU countries (with Iceland) agreed to meet, jointly, a 20 per cent reduction target by 2020 compared with the 1990 baseline.

1. The aforementioned 20 per cent cut in greenhouse gas emissions, compared with 1990 levels.

2. 20 per cent of EU energy from renewables, which was, arguably, included under pressure from Germany which was concerned its renewable energy policies would put German business at a competitive disadvantage. If the EU had been just concerned about climate change, it would not have specified how the GHG emissions target should be met. It would not have specified a renewables target. Incidentally, PM Tony Blair committed to a target of 15 per cent of the UK’s energy consumption (not just electricity generation) from renewable sources by 2020, which has significantly raised the costs of meeting the emissions targets.

3. A 20 per cent improvement in energy efficiency.

The EU emissions trading system (EU ETS), the EU’s key tool for reducing greenhouse gas emissions (GHG), principally CO2, was established in 2005. The EU ETS works on the ‘cap and trade’ principle. A cap is set on the total amount of certain greenhouse gases that may be emitted by installations covered by the system. Within the cap, companies receive or buy emission allowances, which they can trade with one another as needed. Auctioning is currently the default method for allocating allowances. The cap is being reduced over time so that total emissions fall in line with the EU’s targets. The European Commission estimates that it covers around 45 per cent of the EU’s emissions.

The UK remains subject to the EU’s climate change policies, including the ETS, whilst it is a member of the EU. Given the single EU-wide cap, this implies that the overall impact on the EU’s total traded emissions of any UK cuts in traded emissions could well be zero, other things being equal.

In addition to our EU commitments, the UK introduced the Climate Change Act (CCA) in 2008, which unilaterally committed the UK to reduce GHG emissions by 80 per cent of 1990 levels by 2050.Meeting these targets will be extremely expensive. The official impact assessments suggested total costs of £324-404billion, whilst any estimates of the benefits (by way of preventing ‘dangerous global warming’) will depend on effective global action. Suffice to say, there is no effective global action. Global carbon emissions, driven by emerging economies, continue to rise. Under these circumstances, it can only be concluded the CCA’s real purpose was to demonstrate British climate leadership. This is futile gesture politics by any standards, especially as the UK’s share of global carbon emissions is just over 1 per cent. 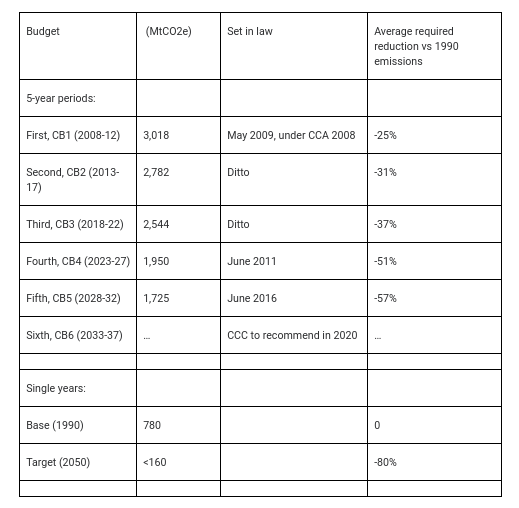 Compliance with the budgets is assessed by comparing the UK ‘Net Carbon Account’ (NCA) against the carbon budget level. The NCA principally comprises:

· Traded emissions: crucially these do not refer actual traded emissions but instead to emissions allowances allocated to the UK under the ETS (the ‘cap’). (Actual emissions have been, in practice, lower than the allowances, see table 2.) They mainly relate to power generation and large energy-intensive industrial plants.

· Non-traded emissions: emissions not covered by the ETS. They include road transport, heating in buildings, agriculture, waste and some industry.

In addition, any credits/debits from other international crediting systems are included, but these appear to be relatively small. The BEIS claims, therefore, that the calculated performance against carbon budgets ‘primarily depends on the level of non-traded emissions’, though it also depends on the relative ‘strictness’ of the ETS’s goals compared with the UK’s.

Table 2 shows the UK’s emissions performance against the carbon budgets. The first and second carbon budgets were met with surpluses to spare. Similarly, it is expected that the third budget will be met, but the fourth and fifth budgets are expected to be missed, even with the 80 per cent decarbonisation by 2050 target. This implies ever-more draconian carbon-reduction policies would be required to meet the budgets. Given the new ‘zero emissions’ target, these budgets are likely to be tightened, making them even harder to achieve. 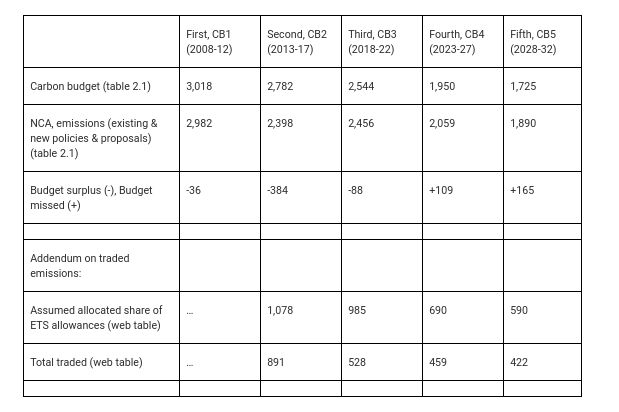 There is, however, more to come. The Climate Change Committee’s latest annual report (May 2019) recommended that the UK should adopt a ‘net zero’ target for greenhouse gases by 2050. Granted, it acknowledged that ‘globally, current pledges of effort do not go far enough’ in limiting global warming to ‘well below 2°C by the end of the century’ (the 2015 Paris Agreement). But, it suggested, ‘the UK can credibly adopt a higher ambition now, which can help influence those countries considering increased effort in the future’. Well, we shall see.

On costs, it said the ‘net-zero GHG target can be met at an annual resource cost of up to 1-2 per cent of GDP to 2050, the same cost as the previous expectation for an 80 per cent reduction from 1990’. This estimate has been criticised as over-optimistic. It was reported in June that the then Chancellor Philip Hammond had suggested the costs could be £1trillion, whilst other commentators have suggested that even this could be a gross underestimate. But whatever the costs, former Prime Minister Theresa May committed the UK to the zero emissions target as part of her legacy.