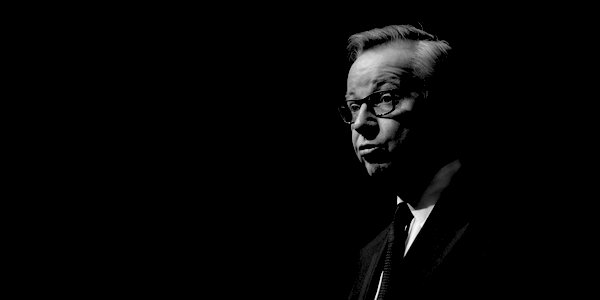 THE Conservative Home website has published its latest leadership survey which shows that the order of the leading trio remains unchanged from last month, Johnson losing a couple of points while Raab and Gove each gain five. The changes at the top are matched by a falling off in support for the rest of the field.

The unloved quartet of Philip Hammond, David Lidington, Gavin Williamson and Brandon Lewis remain below the 1 per cent popularity threshold; a successful prime minister would have known not to keep such unpopular colleagues in positions of power. 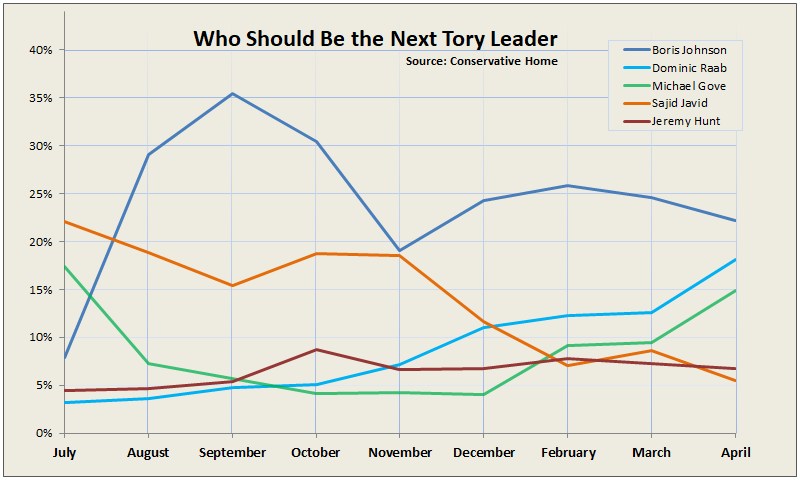 May, of course is the opposite of successful and comparable to Dickens’s deranged and obsessive Miss Havisham in Great Expectations. Miss Havisham was at least consistent. From the moment that her plan fell apart, she had all the clocks stopped at twenty minutes to nine and that is how they stayed, with no extensions or fourth ballots.

Sajid Javid has had a disappointing time of it and has lost much of his elan from the heady days of last July when he topped the first of these polls and maintained a solid second place to the end of the year. 2019 has seen him fall into the tier below 10 per cent, and this survey has him on 5.46 per cent, his worst showing so far. Jeremy Hunt has never made it even to 9 per cent in these polls and so it is hard to imagine that either he or Javid will fire up the membership enough to carry the day – whenever that longed-for day should arrive. 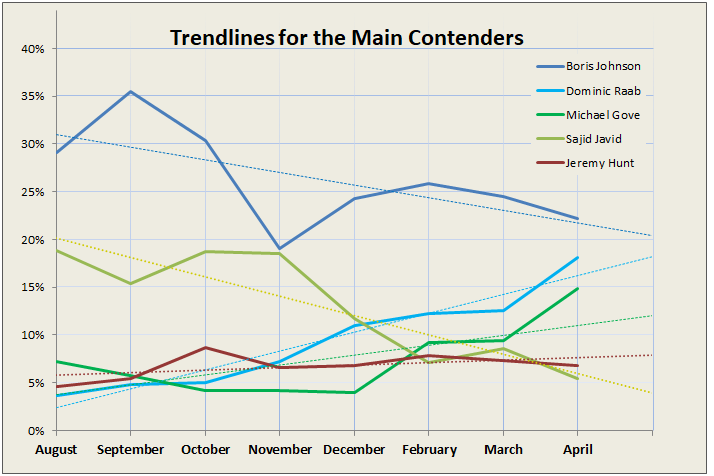 The trendlines tend to confirm this. By excluding the July result from the above graphic, the slide for Boris Johnson becomes more pronounced and the upswing for Michael Gove is accentuated. In the July poll, both were Leave-supporting members of the cabinet and Johnson’s departure post-Chequers gave him a major boost. Gove went in the opposite direction, dropping from 17 per cent to 7 per cent.

It is reasonable now to think that the impact of the fall-out from Chequers is past, and the graphic makes that assumption.

Theresa May’s departure, Mexit, is as uncertain as everything else at the moment, and confusion about the future and the Conservatives’ future leader must surely persist as long as parliament and the government act in flagrant opposition to the people.

That said, there are the beginnings of meaningful development at constituency level as I suggested might happen in TCW two months ago. 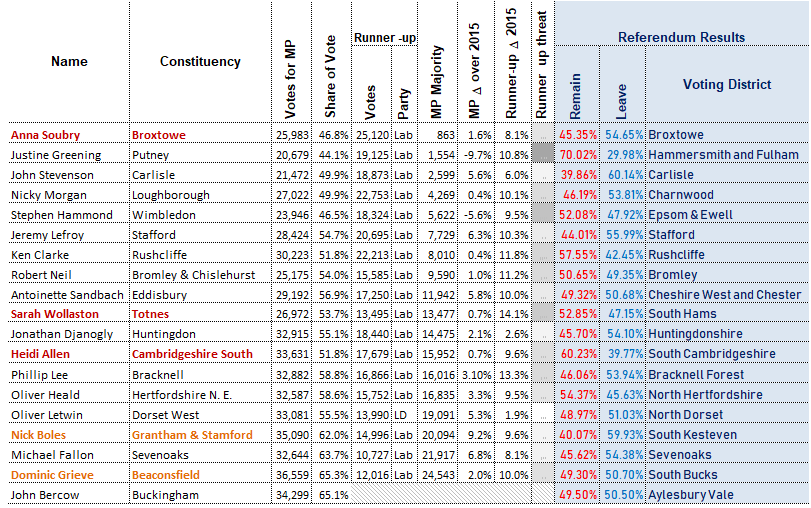 In that earlier piece, a selection of more or less fervent remain-supporting Conservatives were listed in order of that member’s majority at the last election with the referendum results for the voting district in which their constituency lies.

On this list, Soubry, Wollaston and Allen have spared their constituency a job with Heidi Allen as an obvious choice to lead a hiding to nothing party.

If almost a quarter of the MPs on the list are either out of contention or in difficulties with their local party, who can predict what is likely to happen or when? In this sense polls are not currently all that helpful or interesting.

How much more upheaval will there be and how much time must pass before Conservative members are asked to choose between two potential candidates for the top job? If Dominic Grieve with a parliamentary majority of 24,000 is vulnerable what couldn’t happen to Mr or Ms Serpent, the mamba for Votesgone West?