NewsPaperthe art of publishing
HomeNewsGuides lost in the transgender minefield
0

Guides lost in the transgender minefield 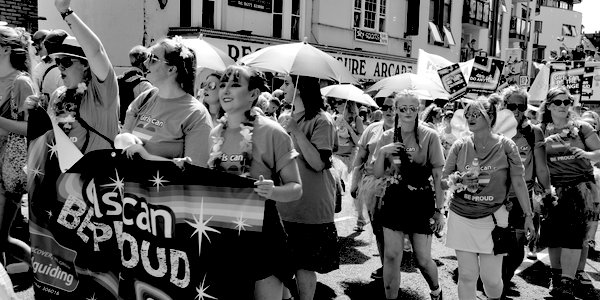 How thoroughly predictable it was that Girlguiding should choose to misrepresent the transgender problem exclusively as nonsense about a safeguarding issue, that is to say, risk and danger. This week it has defended its decision to permit transgender members and leaders, following expulsion of two volunteers who objected to the policy. Let’s be clear. The volunteers were unhappy about trans girls (who have the bodies of boys) and trans women (who have the bodies of men if they are merely self-certified) being able to join Girlguiding. You’d think the clue was in the name, but apparently not.

One of the expelled volunteers is Helen Watts. Despite a commitment over 15 years to Girlguiding, she has now been banned from events and from making contact with her group. Following ‘a number of complaints’ about her and another volunteer, an investigation found that there had been a breach of code of conduct and social media policy. It seems the crime of these volunteers was to have a muddled idea about what a girl is. Furthermore, Ms Watts uttered the incendiary words that ‘girls had a right to female-only spaces.’

Transparently sidestepping that important question, Girlguiding decided instead to argue against something that was not being argued. Its line was that simply being transgender as a member or a leader of a group ‘does not make someone more of a safeguarding risk than any other person.’ It added that ‘keeping girls, young women and our adult members safe is our number one priority’. Well, it doesn’t look like that from here.

The point is not only that there could be a safety issue, it is that girls and young women have an absolute right to female-only spaces, especially given that guides and leaders share showers, lavatories and sleeping accommodation when on camps. Why do they have this right? It is not because there is the widespread fear that trans girls with unwanted levels of testosterone pose to the girls around them the ever-present threat of molestation or assault. It is patently more fundamental than that. They have it because during adolescence girls are coping with changes in their bodies and they should not have to have any insecurity, awkwardness or self-consciousness made worse by being around trans girls who have the hormonal make-up and physical characteristics of boys.

Why is it so very difficult for Girlguiding and the transgender support organisation Mermaids to understand this? To most people (the sane majority, one might venture), this is pretty straightforward, uncontroversial stuff. Watts also makes the strong point that ‘victims of bullying or harassment by men, and girls from some cultural or religious backgrounds might feel shut out if Girlguiding became effectively a mixed-sex space’. Well, quite. But maybe transgender diversity trumps racial and cultural diversity. Who knows? It is clear that this gender politics narrative is about undermining the very concept of sex difference and making everyone toe the line on so-called gender fluidity.

Whither Girlguiding, then? By the look of things, this is going to be problematic, especially if the organisation starts to haemorrhage women who willingly give up their free time for the girls’ movement. Watts claims this is not about ‘one rogue girl guide leader, there are lots of us who are concerned about this’. Their anxiety is that ‘if girls would prefer to have a single-sex space they have that choice without the fear of being labelled bigots’.

Of course, there’s just no reasoning with groups like Mermaids who are militant in their view that trans girls are real girls and it’s just bigotry and prejudice and transphobia that anyone might have misgivings to the contrary. Its response is that ‘the children are not predators, they’re not something to be feared . . . when actually they’re just kids’. Exactly. There are plenty of activity groups and projects out there for not just girls or just boys but for ‘just kids’. Boys and girls. One can’t help thinking, though, that perhaps there’s some mischief, some agenda at play here. As in: There’s a nice little Girlguiding group down the road, let’s see how they deal with this one. Are they ticking all the boxes all the time?

Girlguiding’s leadership cabal is certainly trying to make sure it’s ticking every box in the way now demanded by the transgender narrative. That’s why there is now another upset following its decision to turn away or ask girls who identify as boys to leave. Lunacy, of course, given that in the Girlguiding worldview, what really clinches it as regards whether you are a girl or not, is how you identify, not your pesky old chromosomal reality. I suppose one might argue that at least Girlguiding is being consistent. What a block-headed and cruel policy, though. A girl who identifies as a boy may well not wish any longer to be part of Girlguiding and leave of her own accord. If she doesn’t, why on earth not let her continue to enjoy with her friends the Girlguiding activities that are presumably a welcome counterbalance to the other challenges in the rest of her life? Get this, Girlguiding, the girl who identifies as a boy is no less a girl than a boy who identifies as a girl. She is, in fact, more. And it’s no use handwringing and calling and playing the ‘hate speech’ or misgendering card. It is biological truth, no less.

Children and young people who believe they are of a different gender to what the biological reality of their bodies suggests need sensitivity, compassion and support. This support will take different shapes at different stages of their development. Responsible adults caring for them would do well to help them understand that there are other avenues for fun open to them without almost going looking for distraction and unnecessary bother in organisations that are single-sex for very good reasons. It is a fact that not everything in life can be available to everyone. We cannot all gain access to everything we might wish and to pretend to children that they can is to do them a disservice. Sometimes, unfortunately, there simply are grounds for having to disappoint people. If the transgender movement feel they want to start up their own organisations for children and young people who are transitioning, this might well be the way ahead. Whether Girlguiding, given the current leadership, has a way ahead remains to be seen.