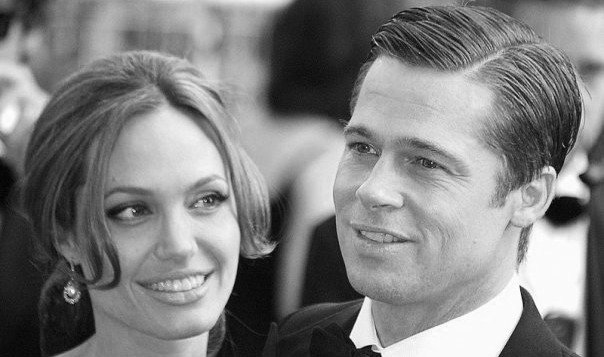 So the really hot story of the summer was the ‘secret’ wedding of Brad and Angelina, a couple so famous that we not only know them by their first names but also by their combined nickname ‘Brangelina’.

Sad to admit, I’ve never met them and I don’t know anyone who has. However ‘Brangelina’ and ‘Karry’ (Kate and Harry) do in fact share some important personal characteristics in common with us  (my wife and I).  They have the same number of children. Their surname is the first name of our house. And now they are married, as are we.

The big difference between us – apart from the minor fact that when people mention ‘Harry’ or ‘Kate’, they’re thinking Potter or Princess, and not Benson – is that we got married first before we had our six whereas they did it the other way round.

Does it matter whether couples marry first or have children first? Are ‘Brangelina’ showing us the way?

For them, now, it probably doesn’t matter. The very fact that they have got married, regardless of when they chose to do so, suggests they have made a clear commitment to their future together. Marriage probably won’t make them better parents. There’s little difference in parenting styles or outcomes between married and unmarried cohabiting parents. But it probably will help them stay together as a couple. And staying together makes a big difference to parenting style and is usually pretty important for the well-being of children.

Actually the odds that ‘Brangelina’ will split up in the next ten years are about double what they would be if they were an ordinary (UK) married couple simply because they are celebs. Two in five celebs split up within ten years compared to one in five of us non-celeb plebs.

On the other hand, if they did split up, they seem extraordinarily unlikely to face the usual problem of lone parenthood, which is lack of resources. The latest data from DWP and ONS suggest that 63 per cent of all lone parents with dependent children are on housing benefits compared to 10 per cent of couples with dependent children. It would be a surprise to find Bran and Gelina living in separate houses on benefits.

All of which makes it pretty odd that we’re not more keen on ‘marriage first’ than we are. Start off unmarried and you face four times the risk of splitting up once you become parents. And if you do then split up, you face six times the risk of relying on benefits.

So, yes, ‘Brangelina’ are showing us the way by getting married at all. They’ve just done it the risky way. For the rest of us who’d like to stay together and minimise the risk of poverty, we’re better off getting married first.