NewsPaperthe art of publishing
HomeNewsHave the Wall Street manipulators met their match? Don’t bet on it
178

Have the Wall Street manipulators met their match? Don’t bet on it 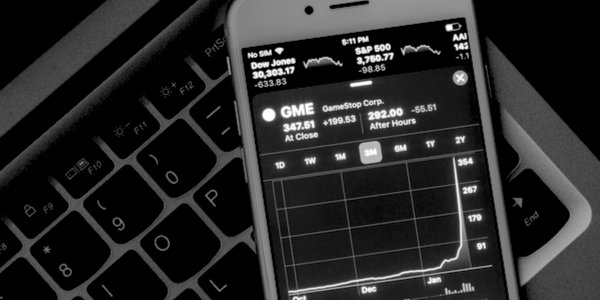 THE party was in full swing, the sound of Russian champagne bottles being opened reverberating around the flat like a salvo of cannon fire.

At least, that is what it sounded like from the other room. Hunched over my laptop with a cheap lager next to me, I was trying desperately to buy an asset that was poised to explode and plummet within the next few hours. Time was of the essence.

Dogecoin – the ‘joke’ cryptocurrency – was being plugged by the likes of Elon Musk and those on WallStreetBets (more on them later). It was time to get on board and risk some money. Having bought all the alcohol for the party, I was hoping to recoup my losses by riding this latest wave of financial madness.

Over the evening, my investment went up 400 per cent. By the time I woke at midday the next day, it had fallen to 200 per cent. Still, not bad. I sold it and my profits more than covered the cost of the booze and even the pizza delivery. Perhaps I sold too soon? Such are the perils of speculation in the crazy world of cryptocurrencies.

The exponential rise (and fall?) of Dogecoin is just another symptom of an utterly dysfunctional financial system. Not that this dysfunction is new, of course. It’s only that it’s making headlines across the world because, all of a sudden, ordinary people are playing large financial institutions at their own game – and winning.

The case in point: GameStop, an American video-games retailer and unlikely battleground for a financial insurrection of the masses against the corrupt, colluded interests of Wall Street.

Already floundering as a bricks-and-mortar retailer in the digital age, GameStop’s stock price had tanked after it was prevented from operating normally for months on end due to lockdown. Seeing little upside for the company, a large hedge fund called Melvin Capital took a huge short position on GameStop, one that was worth over 100 per cent of existing GameStop shares.

Simultaneously, an online community was hatching a plan. Users of WallStreetBets – a forum on reddit.com – saw this aggressive short and decided to buy GameStop shares en masse in an effort to increase the share price and destroy Melvin Capital’s short. Importantly, most of this trading was done on the investment platform Robinhood.

The plan worked. Users of the forum were able to force up GameStop share prices: on December 31, 2020, GameStop shares were trading at USD18.84. By 27 January they had reached USD347.51. Melvin Capital closed its position on GameStop as a result, losing tons of money in the process.

There were subsequently rumours that Melvin Capital had to file for bankruptcy due to the losses sustained. This was averted due to a USD3billion injection of cash into the company last Tuesday, January 26, from two other hedge funds, Citadel and Point72.

On Thursday, Robinhood – the platform on which a large number of people held long positions on GameStop – unilaterally prevented its users from buying any more GameStop shares. Suddenly, those whose money was on the platform were able only to cash out their GameStop positions. There were even reports of Robinhood forcibly selling its users’ positions due to the supposedly unreasonable risk involved in holding them.

By Friday, the company had effectively gone into full lockdown. The company placed huge restrictions on the types of stocks that could be traded freely, limiting permitted holdings in a total of 36 securities to just one share.

In effect, Robinhood had intervened to protect the positions of large hedge funds on Wall Street to the detriment of its own user base. The irony of a company with a name such as Robinhood acting to protect the hyper-rich vested interests of Wall Street has not been missed, with one comment online suggesting the firm to change its name to ‘SheriffOfNottingham’.

The hedge fund Citadel – which stepped in to save Melvin Capital – is also one of Robinhood’s largest customers. The collusion is brazen. Citadel naturally denies that it had any involvement in Robinhood’s decision to halt the perfectly legal trading of stock. Robinhood has presented this as a decision made to protect its customers from excessive market volatility. As ever, the limitation on their freedom to act was entirely for their own good.

With brokers actively stepping in to prevent individuals from executing perfectly legal market transactions purely because it is to the detriment of a Wall Street hedge fund, there can be very few people left unable to see that the modern corporate system is a rigged game. Hedge funds can short companies, potentially bringing about their downfall, but individual investors are not permitted to counter this position.

Wall Street can never lose. While individual investors are free to risk all of their capital on the ups and downs of the stock market (actually, just ups, as endless monetary stimulus is pumped into the system, creating a bizarre world of forever-ballooning asset prices), the financial establishment is to be shielded from such dangers. If it requires market collusion to ensure this, then so be it.

I suspect there will be a strong reaction against such things happening in future. Given that America’s newly appointed Treasure Secretary Janet Yellen has received close to a million dollars in speaking fees from Citadel, there are clearly massive conflicts of interest at play. See some of the other ‘speaking fees’ (aka bribes and influence-buying) she received from Wall Street firms here.

I would not be at all surprised if, at some point in the near future, we see far greater limitations placed on people’s ability to trade shares. This will be framed as a necessary move to ‘prevent market volatility’ and ‘protect the economy’.

Investments may increasingly be allowed to be made only by large institutions or through government-approved financial intermediaries. That way, anything that the little people may do to reverse some of the vast transfers of wealth that have taken place in recent years can be halted. The game will be fully rigged.

It’s always the same story. People make their own social media platforms to circumvent the mass censorship of dissenting voices by Big Tech: the platform is destroyed. People vote the wrong way in an election: the next election is fixed to ensure the establishment’s desired outcome. People exercise their financial power in opposition to the wishes of Wall Street: their ability to trade is shut down.

Big Tech plays its part in this financial saga too. Google removed almost 100,000 negative reviews of Robinhood on its Play Store. On baseless (our turn to use that word!) charges of ‘sexual exploitation’, Facebook deleted a large WallStreetBets-type discussion group. Simultaneously, Discord – an online messaging platform – suspended a WallStreetBets server on its platform, citing a violation of guidelines on ‘hate speech and spreading misinformation’. Quelle surprise! Anyway, who doesn’t hate Wall Street by now?

Years of financial manipulation and collusion between central banks, investments brokerages and hedge funds – with literally trillions of dollars being poured into the system to keep the system afloat – have gone on unimpeded, destroying the little man. The party has never been allowed to end, the stakes continually rising until only central-bank-backed behemoths are left standing. There can never be a market correction: stocks can only go up. Main Street is offshored in the name of shareholder profit and the newly-unemployed are brushed aside with the patronising command to retrain, reskill, and shut up.

Any time ‘the people’ act in a way contrary to the wishes of the establishment, the reaction is hostile. While claiming the constant need for understanding, harmony and unity, those combined powers of Big Tech, Big Finance, government, media and academia, will, without hesitation, clamp down on people’s ability to act freely.

Increasingly silenced, the political and financial elites will move to restrain people’s financial freedoms. Already, a number of banks are colluding to restrict people’s freedom to access cryptocurrency platforms, forbidding their customers from using their own money in an entirely legal way. With cryptocurrencies representing another avenue of freedom outside the purview of central-bank manipulation, the corporate-fascist elite regard it as a threat that must be suffocated.

This is the swamp in action. These are staggeringly corrupt vested interests that will do anything to stop ordinary people from jeopardising the vast amounts of money, power and influence they have accrued through a rigged system – a system that has been draining ordinary people of their wealth and freedom for decades.

Don’t shed a tear for Wall Street. They will howl and wail, admonishing those who dare to play them at their own game. Never forget that these are the people who would strip of you of your job and life savings if they stood to make a quick buck.

Perhaps these people have finally met their match in the self-described ‘autists’ of WallStreetBets, who are utterly refusing to back down.

A financial insurrection is now under way, and it can’t come a moment too soon. Watch this space.