History lessons censor the horrors of the Bolshevik Holocaust 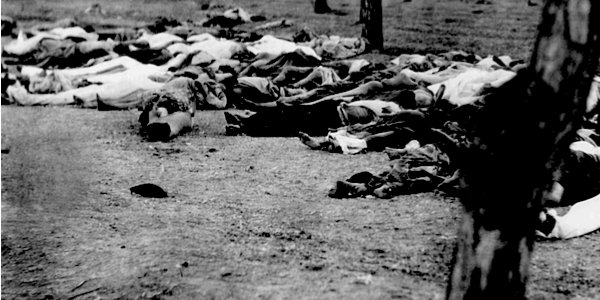 Should there be basic standards in the teaching of history in this country?

There seem to be. But they are the wrong standards.

People from overseas do wonder why the British seem obsessed by Nazi Germany. The time when peak-time three-channel television viewing included a classic British or American war film is long gone. The films are shown, but are submerged in our age of digital media.

Instead our children are extensively taught about Nazi Germany in history lessons. And this seems reasonable, as it does demonstrate how political extremism and social hatred is taken to a most macabre conclusion.

However, the teaching about the dictatorships of the first half of the 20th century seems to stop there. My son, who is yet to choose his GCSE subjects, has recently been taught in history lessons about Nazi Germany and the USSR. He had six lessons (and counting) on Nazi Germany, presumably enough for him to be able to understand the relationship between the Geheimstaatspolizei and the Sicherheitsdeinst in the Reichssicherheitshauptamt*. One of my son’s first lessons started with an imagined Nazi decree. However it was printed on a mock-up of a British Government Department of Education letterhead. My son was unable to tell me if the name of the Conservative Education Minister used was a real one. He thinks it might have been.

By contrast, there was but one lesson on the history of Russia. The thrust of the lesson was how the Bolsheviks overthrew the backwards-looking, corrupt, autocratic Czar and modernised the country. And that’s it. There was a brief mention that there were ‘some’ deaths some time, but the whole 72-year horror story of the USSR was passed over. This is in fact a form of Holocaust denial by omission.

It was public knowledge, even at the time, that Stalin’s policies were the physical extermination of class enemies as well as the appropriation of agricultural produce from farmers in the Ukraine. Millions died in the state-engineered famine that is now called the Holodomor. The other death tolls of Stalinism were also well known at the time, but were not taught to my son’s class. The slaughter of the Russian people had already begun under Lenin and Trotsky. Stalin just continued and broadened the Bolshevik policy of state murder as a means to this bogus utopia. The liberal professions in this country persist in playing down the genocides and democides by the Bolsheviks because the horror does not fit their narrative.

It also does not fit into my son’s school’s history lessons. So yet another generation of children will be force-fed ‘Socialism-Good, Nazism-Bad’, rather than being taught that Soviet Socialism was just as bad, went on for far longer, and, Nazi-style, murdered way more innocent people on the simple basis of who they were. And, of course, they will also be required to despise capitalism and criticise democracy if an election result does not go their way. All Right-of-centre politics gets tarred by a bogus association.

My son’s classmates were similarly not taught that Stalin was actually Hitler’s ally for almost two years and that the Soviet dictator had agreed on how to carve up Eastern Europe, dividing Poland and marching into the Baltic states. The mass murder of Polish intelligentsia by Soviet commissars was not included in any lesson plan. Also omitted was Stalin’s execution of his most able generals in a fit of paranoia in the late 1930s. Stalin’s failure to heed warnings of Germany massing on the border, and how the USSR was unprepared for the onslaught, was never spoken about, still less the top-down incompetence that led to most of the Soviet Air Force being destroyed on the ground on the first day of Operation Barbarossa. The school’s historical narrative did not include the fact that Russia’s industry was not up to the task of equipping its own armed forces, and that the USSR depended heavily on military material produced in British and American factories, some of it delivered in Arctic convoys at great risk and cost.

People wonder why the young are so enthusiastic about Jeremy Corbyn and his creed of neo-communism. It is because they quite literally do not know any better. They have been deliberately under-taught about the dark, evil history of communism, and certainly do not equate it with the depravity of Nazism, which they should. What is worse, however, is that pupils who drop history before GCSE have not tried to find out for themselves. It is debatable if the ones that continue with history do so either if the lessons do not cover the USSR. The GCSE syllabus certainly does not, focusing instead on slavery in the USA, and the Korean and Vietnam wars. Notice a pattern there? Millennials, those born into a world without the USSR, wonder why they are the object of ridicule. We mock their idealistic, blissful and deliberate ignorance, the poor dears.

Of course, the slaughter in the People’s Republic of China and a host of other socialist countries has not been covered at all by my son’s history teacher.

My son’s school is not located in one of the recesses of socialist Islington to which even Jeremy Corbyn’s ex-wife refused to send her offspring. No, my son’s fellow pupils (but not him) are being brainwashed about the USSR in a rather nice part of Conservative-voting Berkshire by teachers who seem to vote for anything but.

*If you do not already know this, you really do not need to know. Move on, no Googling necessary. And, please, no explaining in the comments section. Thank you.