NewsPaperthe art of publishing
HomeNewsHolly’s Letter from America: D-Day heroes had faith in a just cause....
0

Holly’s Letter from America: D-Day heroes had faith in a just cause. We have lost such certainties 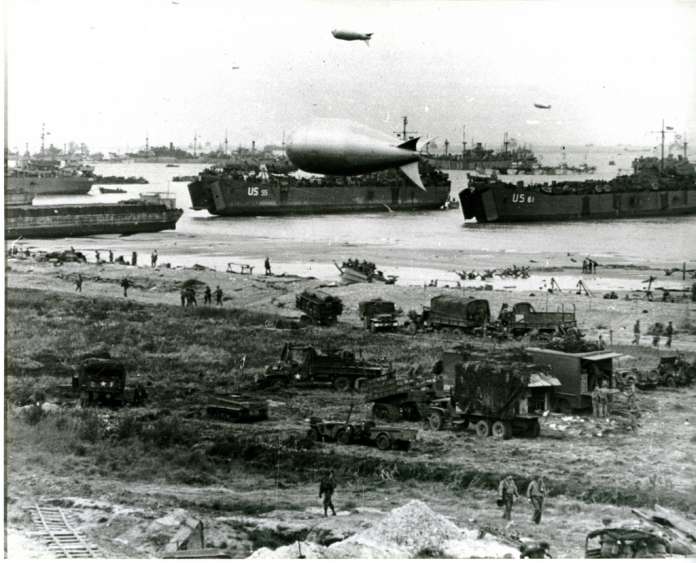 On Friday, my children and I observed D-day.

We watched original footage of the invasions. We listened to clips of speeches from Churchill, Roosevelt, Montgomery and Eisenhower. We looked at maps. We looked at pictures. We went to Omaha Beach on Google Maps.

I’ve heard the story of D-Day countless times before, but every time I hear it I am filled with a sense of awe, gratitude and humility.  It was gratifying to see my children respond yesterday in that way, too.

What struck me about the speeches was the invoking of Deity. Indeed, Roosevelt’s ‘D-Day speech’ is a prayer.  ‘In this poignant hour’, he says, ‘I ask you to join with me in prayer.’  He then prays at length, asking God to bless ‘our sons, the pride of our nation’. They have ‘set upon a mighty endeavor’, a ‘struggle to preserve our republic, our religion, and our civilization ….’ And Roosevelt asks the nation not just to pray now, but to ‘continue in prayer’, because of the enormity of the task.

It has been said that the past is foreign country.  They thought differently to us, so even when we can understand the language of the past, we have to work to understand the concepts behind the words they used.

Faith was a major ‘player’ in the D-Day landings.  As D-Day sinks further into the past, and with the advent of a particularly assertive atheism and a rise in the number of people claiming no religion, we are in danger of losing sight of this truth.

Intertwined with this faith was a sense of morality, and the two reinforced each other.  Ronald Reagan, in his speech commemorating the 40th anniversary of D-Day, asked the veterans, ‘Why did you put aside your instinct for self-preservation …?’  He then answered, ‘It was faith.’  They had faith in the righteousness of their cause, and they had faith ‘that a just God would grant them mercy, on this beachhead, or on the next.’  Our cause was right, and therefore God would not forsake us.

And what was ‘right’?  Here is where the language of ‘liberty’ was used.  It was right to fight for liberty.  But, time and again – by Roosevelt, Churchill, and Eisenhower – the word ‘liberty’ was used in a very specific sense:  in opposition to the word ‘tyranny’.  It was right to fight against tyranny, and the oppression and suffering that it caused.

Faith has become a euphemism for intolerance, irrationality, closemindedness, and even oppression.  Acts which are motivated by faith must be viewed with suspicion, and of course our laws cannot be connected to a morality motivated by faith.  That would be an infringement of liberty of those with no faith.  Never mind the fact that secularism is a competing player, not a neutral referee, in the ‘freedom of religion’ debate.  Secularism has ensured, in the name of liberty, that freedom of religion has mutated into freedom from religion.

At the same time, the term liberty, which has been associated traditionally with self-government and democracy, has been replaced gradually by concepts like ‘choice’.

Nowadays, ‘choice’ seems to be used as a way out of the confines of morality.  Somehow, if something is your choice, then it must be the right choice.  There is no objective moral order; what is right or wrong is simply what you decide for yourself to be so.

This seems to me to be a far cry from the liberty for which our countrymen fought and died on D-Day.  They were fighting to eliminate tyranny, not an objective moral order.  They wanted to ensure that future generations could practice faith, not jettison it.

Atheism and radical subjectivism may be in vogue, but they won’t help us understand the language of faith, or the language of liberty that motivated one of the bravest and most important acts in human history.  They cut us off from that foreign country of the past, leaving us with an impoverished notion of ourselves, and what it means to be free.