Hope Not Hate – stuck in a quagmire of Leftie groupthink 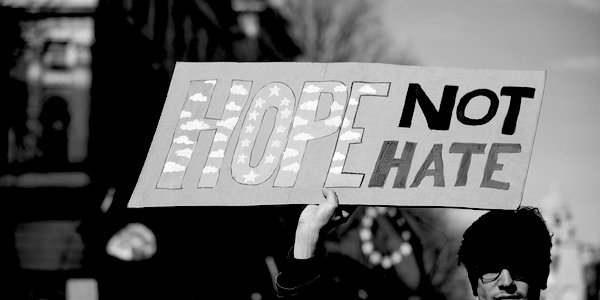 JUST as autumn turns into winter, the spectre of Tory ‘Islamophobia’ is raised each year. And leading the charge is Hope Not Hate (HNH).

We are right to be concerned about the effects of Islamism in our society but we don’t have the right to hate others on the basis that they are Muslim. The demonisation of the other is abhorrent and HNH is correct to point this out, as I said yesterday in TCW. Anti-Muslim hatred is real, bigoted, ugly and destructive, and should not be tolerated or excused in any way.

Where HNH do falter is in their insistence on using the made-up word ‘Islamophobia’, designed to shut down debate and scare citizens into silencing their concerns about the misogyny, anti-Semitism and anti-west ideology of Islamism.

But their embrace of this is unsurprising given that HNH’s chief executive, Nick Lowles, has worked with the All-Party Parliamentary Group (APPG) on British Muslims. The APPG has stupidly let Muslim Engagement and Development (Mend) influence their working definition of Islamophobia. The APPG’s attempt to relate definitions of anti-Semitism to anti-Muslim hatred are tenuous at best and at worse, a nod to Islamist ideology.

Mend is an Islamist group which has inexplicably been embraced as a libertarian group by the government. But, as this report by the Henry Jackson Society shows, Mend is an anti-Semitic, jihadi-supporting, liberal-Muslim-hating extremist group.

Last February Mend was instrumental in overturning a ban on young girls wearing the hijab – a symbol of oppression – at St Stephen’s school in Newham, East London. The Department of Education feebly remained silent about this debacle. Iranian women are being imprisoned for taking theirs off but the British government sees nothing wrong with girls as young as seven being forced to cover their heads lest they appear sexually attractive to men. Why is the government capitulating again and again to Islamists who wish to impose a form of sharia law on us?

Given that the APPG is co-chaired by Anna Soubry and Wes Streeting, it is unsurprising that they have allowed Mend to hijack the narrative on what constitutes anti-Muslim hatred. The less said about Soubry the better. But Streeting has form when it comes to cosying up to Mend. He sheds crocodile tears over anti-Semitism but has yet to explain his involvement in Mend’s events.

And so does HNH. Last July, together with Streeting and John Bercow, HNH participated in an Iftar event organised by the APPG at the Speaker’s House. The guest list included Islamic Relief, an organisation with proven links to Hamas and the Muslim Council of Britain (MCB), who have connections to the Muslim Brotherhood.

That HNH also see fit to parrot MCB’s narrative on Islamophobia in the Conservative party is indicative that they too are embracing the bizarre love affair between the Left and Islamists. Until a Muslim MP needs police protection to attend a Tory conference, like Luciana Berger did when she attended the Labour one, then there can be no comparison between the anti-Semitism in Labour and anti-Muslim hatred in the Tories.

Why are HNH, who claim to fight hatred and posit themselves as progressives, so enamoured with Islamist organisations and so determined to push the APPG’s Mend-influenced definition of Islamophobia? There is nothing progressive about Islamism – it is a hate-filled ideology. HNH should be ashamed of themselves for championing this definition.

I have written before on how there are shameful incidents of anti-Muslim hatred in the Tories and those members who engage in this must be disciplined. But objections to FGM, honour killings and the imposition of the hijab on little girls are not examples of anti-Muslim hatred, even if the APPG insists they are. If we cannot speak out freely against Islamism on pain of being accused of racism or imprisoned, their victims will continue to suffer.

HNH’s implication that most of us are Islamophobic is also insulting. Every time there is an Islamist attack we are warned by HNH, and their supporters, not to go on an anti-Muslim rampage. I have yet to see this happen. Not only does this take the focus from the victims and the bereaved, it also insults the great British public by implying that they are racist savages ready to avenge murder on any Muslim they come across. In reality we have gestures of friendship, like the man who held up a poster of solidarity outside a Manchester mosque shortly after the Christchurch terror attack.

This is not to deny that attacks do occur against Muslims – they do and they are disgraceful. But there has never been mob justice attacks on a scale which warrants these degrading warnings. The British people are, on the whole, better than that.

So convinced are they of their own virtue that HNH are not able to see the mote in their own eye. In a feat of breathtaking irony, their website has a photo of a woman in a hijab – a symbol of Islamist oppression – above a blog admonishing misogyny among the far Right.

This typifies HNH’s stance on all issues they advocate for – their initial aims were admirable but they are now lost in a quagmire of Leftie groupthink, and disturbingly align themselves with Islamist ideologues. By doing so, HNH undermine so much of their previous good work.

The threat from the far Right to Jews, Muslims and all of us is real. But they are afforded no legitimacy unlike those who pose as progressives while championing fascists. That HNH have appointed themselves arbiters of hate monitoring should concern anyone who values free speech and democracy. They seem incapable of combating legitimised hatred from the Left and Islamists, a far greater threat to us than the far Right will ever be. HNH’s initial aims deserve to be lauded. But by ignoring the true hatred in our society, and even at times taking part in it, HNH is blinded to the rough beast which slouches towards Jerusalem.