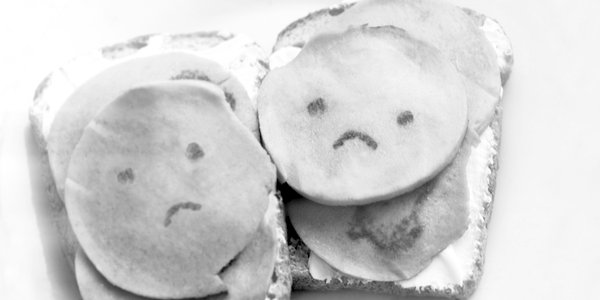 FROM my time as a hospital visitor in London five years ago, two images stand out; an elderly woman who was cheerful when I first saw her declining into a frail, hunched shadow within weeks, and her whispered words to me, ‘God help me.’ And an old man gazing at an uncut, bare slice of Mother’s Pride which had been dumped on his breakfast tray. I cut and buttered it, handed it to him and he tore into it with such ferocity that I realised I was seeing someone starving.

I was saddened but not really surprised this week to hear that five people have died in hospital, poisoned by listeria in their sandwiches. Nine cases were confirmed. An urgent review of hospital food has been ordered by Health Secretary, Matt Hancock. He says he is ‘incredibly concerned’ and has ordered a ‘root and branch’ review of NHS catering, but investigations and statistics have been compiled for years to no effect.

According to the ONS, malnutrition was a contributory factor in three hundred and fifty-one deaths in NHS hospitals in England and Wales in 2016. Elderly people often arrive with the condition, including a shocking fifty per cent admitted from care homes, but they don’t improve once they reach a hospital bed.

A ‘Malnutrition Task Force’ established in 2012 looked at all aspects of nutrition in social care. In 2017 they reported that a third of over-65s admitted to hospital were at risk of malnutrition. Seventeen per cent of patients said they didn’t get enough help from staff to eat. Only nineteen per cent said they ‘sometimes’ got enough help.

When they are fed, the quality of food is doubtful. I was astonished by the kitchens at Queen Charlotte’s hospital in Hammersmith, their size and opulence worthy of Buckingham Palace. Even the smaller ward kitchen had acres of shiny stainless-steel sinks and bright lights. It could have doubled as an operating theatre, but, apart from four gleaming microwaves for defrosting, not even an egg was boiled in there. As a patient myself, in 2010, I asked for a fried egg for breakfast. It was out of the question. Staff tittered at my temerity, as if I’d demanded a full English.

All food is now brought in from outside, packaged in plastic. I met a man who longed for a jacket potato with butter. He hated beans. On the hospital menu baked potatoes only came with baked beans. I asked if he could have a plain spud. ‘Not possible,’ I was told, ‘all with beans.’

The only alternative was a wet grey mush. Like other patients he’d learned to avoid the ‘fish’ pie with its slimy contents and topping of grey cumulus blobs. An EU patient told me that Spanish hospitals served fresh fish most days from the local harbour. When I asked her about the pie, she put her tongue out in disgust. Our medicine is better but our food is trash.

There is a panoply of dishes on the laminated NHS menu card; curried goat, ackee and saltfish, Arabic halal, Asian halal and Asian vegan, but no plain potato, ice cream, custard, diabetic desserts, or anything freshly cooked.

Prisons spend around £2 a day per inmate on food, the NHS not much more. Last year, Gloucester Royal spent just £2.61 per patient, per day, Cheltenham General £3.63. Alder Hey £3.80. As a visitor I was often tempted to say to people, ‘Try to build yourself up,’ but they couldn’t even if they’d tried.

These days you need to be tough and well nourished before you enter hospital if you want to survive. In 2017 The Campaign for Better Hospital Food, run by Sustain, an alliance of NGOs, now championed by Prue Leith, looked at 30 London hospitals and concluded that half of patients were dissatisfied with what they were offered. While 77 per cent cooked fresh food for the staff, only 30 per cent did so for patients. Only fifty per cent were meeting basic food standards.

‘The Government has failed to take seriously the dire state of hospital food for too long and now half of London hospitals are not meeting even basic food standards,’ wrote Katherine Button, the campaign coordinator. ‘Good food plays an essential role in recovery and patients in NHS hospitals deserve better. The standard of food in schools and in prisons is protected by legal minimum standards and we demand the same for patients in hospitals.’

Alex Jackson, also of the campaign, wanted food standards to be set for all hospitals. But I wonder if more bureaucracy is the answer. I put the baked potato problem to a doctor.
‘People tell me these things all the time,’ he replied. ‘But that’s the way it is. The NHS is a huge bureaucracy and nothing ever changes.’

At Hammersmith, I often used the staff canteen. Like much British catering it wasn’t great; water instead of milk in the cheese sauce and puddings tasting of Aspartame, but there was fresh cooked food, salads and piles of baked potatoes naked as nature intended. It seemed such a pity and so absurd that some of that couldn’t be delivered to the wards, just one floor above. Everyone can see that NHS hospitals need less waste, good cooks and common sense. But as the doctor said, that never happens.