How Johnson let Europe take us to the cleaners 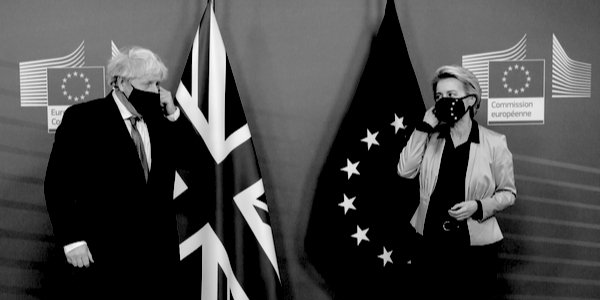 MY reading of the last week of Brexit negotiations is that the sooner we return to proper Cabinet government, the better. Euro summit bargaining is for the birds. Ursula and Barnier have been Euro-bargaining for years. We sent a former diplomat who did a splendid job, then at the crucial final stage replaced him with a former reporter.

Boris Johnson is not experienced at negotiations. He shows no talent for it, he has no nerves. He should have left Dave Frost in charge right to the end. Instead he fell for the EU ploy – playing on his simpleton side, his vanity – and they methodically took our fishing and coastal communities to the cleaners.

Dave was in the House of Lords and therefore answerable to Parliament. In effect, he was a minister, and he should have been allowed to do his job.

Barnier played with his phone because his job only came back when they screwed us over the quotas for individual catches of fish. Channel cod says it all – a 1 per cent increase in the British quota. In other words, our coastal waters and EEZ have been given away for another five and a half years.

We must get back to Cabinet government where ministers run their departments and the Prime Minister is chairman, like Maggie’s governments and Jim Callaghan’s governments. At the moment we have a series of Tony Blair kitchen cabinets where decisions are made on the hoof and no record of Cabinet agreement exists to show that his line for dealing with Ursula was agreed beforehand.

If such a record does exist, the ERG members should ask for it to be laid before Parliament.

They should also demand sight of Boris’s plan to build a new and much larger fishing fleet within the next five years.

I’m sorry to spoil the party, but this trap was so obvious that I fear Johnson is yet another of these people who have enjoyed the best education money can buy yet are devoid of common sense.

And I have no hesitation in saying that now he’s finished his personal part of the negotiation – no extra fish – he should go before he does more harm. I wouldn’t like to find myself in a nuclear standoff with Russia or China and with Johnson as the man with a chubby finger on the button.

He should take Gove with him.

If you get the impression that I think his generation are pretty wet, you’re absolutely right.

Which brings me to another of them, a Europe fan. I have a disadvantage when I listen to their bluster – I live in Europe’s oldest democracy and it’s under siege from the EU.

Read Conservative Home, Tuesday’s edition. If you want to know what not to do regarding our relationship with Europe, David Lidington has very kindly taken the trouble to write out a list.

Once you’ve read his list, you’ll understand why the EU Commission pay millions of pounds a year to manipulate our institutions and thereby our minds.

Built into the trade ‘deal’ is a wedding cake of committees to monitor and meddle in our economic life with David Lidington’s proposals (surely not his but Mutti’s) that our diplomats must spend much of their time consulting EU members and the EU.

This country is only just emerging from a fifty-year obsession with the continent across the Channel when our global mission should have been to do our utmost for our allies during two world wars caused by Germany, the Commonwealth, and strike up trading relationships with all the fast-growing economies on the planet. The last thing this country needs is to smother itself to death in EU committees. The whole idea of this verbal and paper mountain is to lock us in to a form of shared sovereignty, with the EU in charge and Satellite One Vereinigtes Königreich locked into the orbit of Die Sonne, Deutschland.

By all means let the EU have its wedding cake with more tiers than Christopher Wren piled around the spire of St Bride’s, Fleet Street. But let the DTI have a special team for that chore. No ministers or diplomats should waste our time and money on the EU. Let’s get on with the second industrial revolution and plug ourselves into the fast growth markets of the planet.

Only one will be found in Europe: ours.

Another red herring – if you’ll forgive the ghastly joke – is Nato.

Before the wall came down, West Germany provided a dozen strong armoured and mechanised infantry divisions with two thousand tanks supported by a large air force on Nato’s central front. According to Der Spiegel, nowadays only a handful of tanks are roadworthy. Angela Merkel has quietly disarmed. Ursula von der Leyen was her defence minister when plan Forward Look 2040 was drawn up. According to the plan, Europe can no longer rely on America for its defence, and Nato is breaking up. So is the EU. Eurozone members should be drawn close around Germany under an EU command structure, replacing Nato. (You can read more detail here.) For the first time since 1949 this German-driven EU project opens a political crevasse – one day the oceanic Nato members may be forced to part ways from their land-focused EU allies.

I agree with Lidington – we should focus on Nato, but not for his reasons. We need to extract some honest answers from Boris’s friends and allies, because living next door and daily reading or hearing what they say about us on TV – Swiss TV has mostly German reporters including the one in London – they don’t sound like friends and allies to me.

More than likely they will cause as much trouble as possible everywhere they can from Belfast to Port Stanley, from Gibraltar to our seat on the UN Security Council.

We have to be punished for deserting the empire.

They are pinning a great deal on the prospect of a hostile administration in Washington and using Northern Ireland as a way of stoking up trouble while increasing their chances of amputating the province – all German-speaking children have to be punished by Schwarz Peter before they can enjoy Christmas.

Top down central power governments on the Continent don’t understand Americans any more than they do Brits skiing in Verbier. We’re a riddle without any enigma wrapping. Keep it that way. Forget David Lidington.