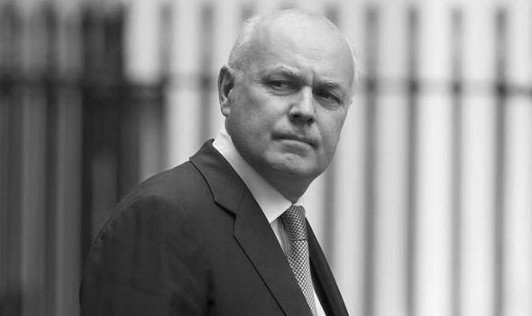 IMMEDIATELY after the 2017 general election, the Guardian’s Owen Jones began crowdfunding a vanity project, and for over two years he fronted the far Left’s concerted effort to unseat the former Conservative Party leader Iain Duncan Smith.

Without question, last month IDS was under serious threat from the Momentum-backed Labour candidate in his constituency; fortunately, the good people of Chingford and Woodford Green retained sufficient sense to re-elect him as their MP, by a majority of 1,262. Much more predictable than the result was the effect of the constituency being flooded by Leftist louts: in the words of Duncan Smith, the recent general election was ‘quite the nastiest, foulest campaign that I’ve ever seen fought in my 27 years in Parliament . . . I genuinely point the finger at this Momentum crowd who have come in to support the Labour Party’.

Iain Duncan Smith was the Secretary of State for Work and Pensions who introduced Universal Credit. Having a single payment replace byzantine benefits was a policy developed by the Centre for Social Justice (CSJ), the think tank IDS set up in 2004 having been ‘appalled’ by the extent of ‘social breakdown and the poverty it created’.

The CSJ’s belief that ‘poverty is about much more than the simple absence of money’ is of course anathema to the Left. Universal Credit was one of the measures intended to ‘ensure work always pays more than living a life on welfare and fewer children are living in workless households’, whereas the Left prefers people to be parked on benefits and kept beholden to the state.

The rationale for Universal Credit remains valid, though undoubtedly the change has been poorly implemented by the machinery of government. For the Left, however, honest disagreement over policy and how best to help the needy is not sufficient; instead, political opponents must be impugned and demonised, as was evident in the reaction to the knighthood bestowed upon Iain Duncan Smith in the New Year Honours.

A petition of objection asserts: ‘The honour of a knighthood is an insult to the hundreds of thousands of vulnerable individuals across this country who are suffering as a result of his policies and to those who have tragically lost loved ones as a direct result’. Apparently, IDS is directly ‘culpable’ for ‘causing hardship to millions’.

At the time of writing, over 220,000 (and rising by the second) have countersigned this diatribe by a psychiatrist named Dr Mona Kamal. The aptly named Mona is one of those overstretched NHS employees who nonetheless has ample time in which to be a Left-wing writer and activist.

Unsurprisingly, the personalised bile towards IDS in Kamal’s petition was enthusiastically endorsed by poisonous Paul Mason: ‘This ghoul has condemned tens of thousands of people to avoidable death and millions to misery’.

By the way, the picture used to promote the petition, showing Iain Duncan Smith punching the air, no doubt is meant to illustrate his supposed delight at having imposed hardship and distress. In fact, the still from 2015 is of IDS celebrating an increase to the national living wage. But why bother with facts when you can fulminate?

Equally antagonistic was the Labour candidate whom IDS recently defeated. Fazia Shaheen, director of the trade union-funded Centre for Labour and Social Studies (CLASS) and frequent mouthpiece for Momentum, appears to hold IDS personally responsible for the suffering of her late mother and the ‘indignity in how she was treated by the state’.

Infected following a heart transplant, her mother’s ‘last hours were spent waiting for help on a trolley in an over-run NHS hospital’, yet seemingly the hospital and staff are immune from criticism – much more convenient for Shaheen to pin the ‘pain and suffering’ on Iain Duncan Smith.

Thankfully, Fazia Shaheen did not make it to Parliament, at least not this time. Someone who has been elected, alas, is Nadia Whittome, formerly a ‘hate crime worker’ – yes, really – and now MP for Nottingham East. Twenty-three-year-old Ms Whittome is the new Baby of the House; unfortunately, already she is being immature for her age, alleging there to be ‘millions of people whose loved ones have been killed by Iain Duncan Smith’s policies’.

Mind you, as demonstrated by each of the tweets below, reacting to the honouring of Iain Duncan Smith, Labour’s older heads are no wiser.

Rayner and Lavery, from Corbyn’s shadow cabinet, are reported to be amongst the contenders for either leader or deputy. Pidcock would have been in the frame but for the good sense of the electorate in North West Durham. Nandy, too, is expected to run, and is purported to represent a more sensible strand of the party, although her smearing of IDS suggests otherwise.

After being ruthlessly ousted as Tory leader, Iain Duncan Smith could easily have skulked out of public life. Instead, any fair-minded judge should acknowledge that by establishing the Centre for Social Justice, and in his work as Work and Pensions Secretary, IDS genuinely sought to improve lives hitherto blighted by ‘a system originally designed to support the poorest in society . . . now trapping them in the very condition it was supposed to alleviate’.

Nor should it be forgotten that in March 2016, immediately following the Budget, Iain Duncan Smith unexpectedly resigned from the cabinet because ‘the latest changes to benefits to the disabled, and the context in which they’ve been made, are a compromise too far . . . they are not defensible’.

Hardly the action and words of a heartless hatchet man. The Left can by all means criticise the policies and argue that his solutions were misguided. But by maligning IDS as having been consciously cruel and callous, these past and present Labour MPs continue to signal their sanctimony and frame the political debate as good versus evil – the same boneheaded bluster which voters have just roundly rejected.