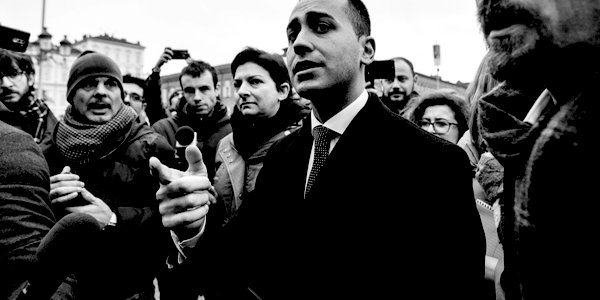 Why did the BBC TV Six O’Clock News on Monday ignore the Italian election results? The dramatic turn of events in ‘the beautiful country’ received extensive media coverage elsewhere in Britain, in Europe and around the world. ‘Political earthquake’ was the term most widely used to describe the result.

On the eve of the vote, readers of The Conservative Woman had been tipped off that something worth reporting was on its way. Tom Gallagher had written an insightful piece headlined ‘La Dolce Vita is over for Italy’s Europhiles‘.

He was right! Not only did support for the governing and pro-EU Democratic Party collapse, but Euro-sceptics triumphed. Winner of the contest, with around a third of the vote, was the Five Star Movement (M5S) led by Luigi Di Maio. It is so anti-establishment that it does not even call itself a ‘party’ and proposes direct democracy through online referenda. It requires its elected representatives to serve no more than two terms and to give half of their bloated Italian parliamentary salaries to help fund small businesses. Although it has reined back on its call for a referendum on the euro, its spending plans will torpedo EU rules on budget restraint.

Equally Eurosceptic is the League. Following the election it has become the dominant party of a centre-Right alliance which won around 37 per cent of electoral seats – 40 per cent is the cut-off point for forming a government. Its leader, Matteo Salvini, describes the euro as ‘a crime against humanity’ and wants strict control of immigration. His main political ally, Silvio Berlusconi’s Forza Italia party, has called for the deportation of 600,000 illegal immigrants and describes immigration as ‘social time-bomb’.

Was panic about having to report the triumph of ‘populism’ over ‘unpopulism’ in Italy a reason for BBC TV deciding to ‘pull’ the story of the Italian election result from its half-hour Six O’Clock News? True, BBC news reporting of what is going on in Europe beyond Calais is lamentable, but national elections do tend to attract coverage.

Few countries, if any, puzzle British commentators more than Italy. It is an enigma that begins with the mistaken notion that, in any meaningful sense, it is a single country at all. The ‘truth’ about Italy is that there is no single ‘truth’. You can have any ‘truth’ you want, especially if you have funds.

As for Italy’s current ‘political earthquake’, it is likely to be yet another example of what Italians call ‘gattopardismo’, a description derived from Lampedusa’s historical novel, Il Gattopardo (The Leopard). Faced by the political earthquake of Italian unification, Tancredi, a central character, states: ‘Se vogliamo che tutto rimanga come è, bisogna che tutto cambi’ (‘If we want things to stay the same, it is necessary that everything changes’). It was this perspective on Italian politics that brought the word gattopardismo into the Italian language.

BBC TV 6 0’Clock News might, at the very least, have reported that from the point of view of most ordinary Italians little is likely to change as a consequence of Sunday’s ‘political earthquake’. Gattopardismo is the name of the game in Italy with, or without, the EU.