NewsPaperthe art of publishing
HomeNewsIn God’s name, why is the Pope inviting abortion-backers to his Vatican...
98

In God’s name, why is the Pope inviting abortion-backers to his Vatican ‘health’ talks? 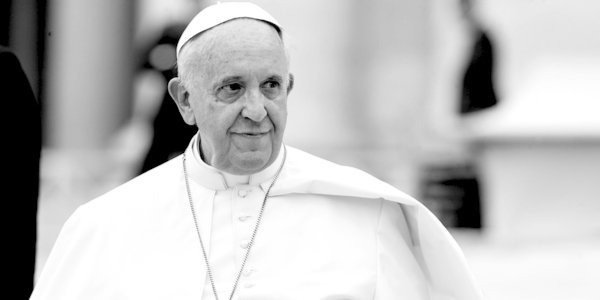 He who sups with the devil should have a long spoon.

This will be the Vatican’s fifth such event and because of Covid, it will be ‘virtual’. The gathering promises to bring together ‘the world’s leading physicians, scientists, ethicists, policymakers, philanthropists, and influencers to engage in powerful conversations on the latest breakthroughs in medicine, health care delivery and prevention’. Bill Gates will not be attending.

To take place from May 6 to May 8, the conference is being heavily promoted on social media: ‘#Unite to Prevent and #UniteToCure.’ It will certainly be busy, with 114 ‘international thought leaders’ and even two named Catholic clergy.

Michael Haynes reports that the action will be moderated by ‘ten world renowned journalists,’  including Moira Forbes, scion of the Forbes publishing dynasty, Katie Couric, US television journalist and presenter, and other journalists from Left-wing media corporations including CBS, CNN, MSNBC, and the Wall Street Journal.

Perhaps to underline the Vatican’s recent public pronouncements on its financial difficulties, the conference is being funded by donations, notably from Moderna, Sanford Health, Akkad Holdings, the John Templeton Foundation, and bizarrely, the  Church of Jesus Christ of Latter Day Saints – the Mormons.

Pope Francis’s environmental encyclical Laudato Si (video), is to be the ‘guiding theme’ for discussions. But none of the ten goals listed for the conference refer either to God or the Catholic Church. Topics include ‘Human Enhancement, Living Healthily to 120 and Beyond, and Sustainable Health Care: Protecting Our Environment.’

Proceedings will be opened by Dr Anthony Fauci, Director of the US National Institute of Allergy and Infectious Diseases, and Joe Biden’s chief health advisor. Fauci grew up Catholic, as did Biden, but appears equally ambivalent about his faith. He has described himself previously as a humanist.

Fauci is an advocate of Big Pharma and led the US response to Covid, extolling mask wearing, social distancing – including church closures, lockdowns, and mass vaccination. He is ‘pro-choice,’ and recently assured the World Health Organisation of the Biden administration’s commitment to funding abortion.

In 2018, Ms Clinton spoke at a ‘Rise up for Roe’ event in New York City organised by Planned Parenthood https://www.plannedparenthood.org/ – the US industrial-scale abortion giant – to oppose Brett Kavanaugh’s confirmation to the Supreme Court. During her address, she criticised the pro-life movement, labelling it the ‘anti-choice movement.’

Chelsea is also an expert in economics, crediting legal abortion for adding trillions of dollars to the US economy. She is a strong advocate for Planned Parenthood.

The CEO of Pfizer will be a speaker. Albert Bourla is a Greek vet, and the man who described the State of Israel as a ‘living Covid vaccine experiment,’ despite his own Jewish heritage.

The Director of the US National Institute of Health (NIH) Francis Collins, has accepted his invitation. He has a long history of anti-life policies and has previously defended the ‘scientific benefits’ of foetal tissue research, claiming that such work can be conducted ‘with an ethical framework.’

Even an impartial observer might be beginning to pick up a trend here. But it gets worse. Some of the other conference speakers look like people who took the wrong turn for Davos.

There is the woke boss of cloud-software giant Salesforce, Marc Benioff, who has long battled for trans and gay rights, and firmly aligned himself with the liberal elite, by banning emails from Republicans during the Presidential campaign. He has since prohibited clients from questioning the results of the 2020 election.

The United Nations representative will be the primatologist Dame Jane Goodall, who has a track record of criticising Catholic Church teachings on sexuality and contraceptives.

In this 2007 video she accuses the Church of standing in the way of reducing global population, saying: ‘The Catholic Church makes quite a major problem when you are trying to balance between people and their environment and that’s what has to happen. It’s population growth that underlies just about every single one of the problems that we’ve inflicted on the planet.

‘If there were just a few of us, then the nasty things we do wouldn’t really matter and Mother Nature would take care of it – but there are so many of us.’

Goodall may find support for her views on human population control from the new age activist Deepak Chopra and others.

Aerosmith rock guitarist Joe Perry has been in lockdown in his beachfront condo in Sarasota, Florida, since last March, but has read The Great Influenza: The Story of the Deadliest Pandemic in History.

His take on Covid: ‘A lot of things are different now – medical things … but on the other hand, we got a lot of people flying around the world. So, in a lot of ways, we’re in the same position we were in 1918.’(?)

Pope Francis will close the gig conference by giving the participants a private, ‘virtual audience’ – backstage as it were. The optics could not really be any worse.

The conference tells us many things, none of them good, about the Vatican and the judgment of those counselling Pope Francis.

His welcome to the Vatican and acceptance of funding from the CEOs of Moderna and Pfizer; his inclusion of Big Tech woke activists who take every opportunity to malign the Church and its teachings, and his association with celebrities and well-placed ingénues such as Chelsea Clinton are grave errors.

Pope Francis has a unique opportunity to seek counsel from the man who preceded him – Pope Emeritus Benedict XVI, who turned 94 on April 16. Francis should seek him out, sooner rather than later.