In the leadership race it’s Boris at a canter 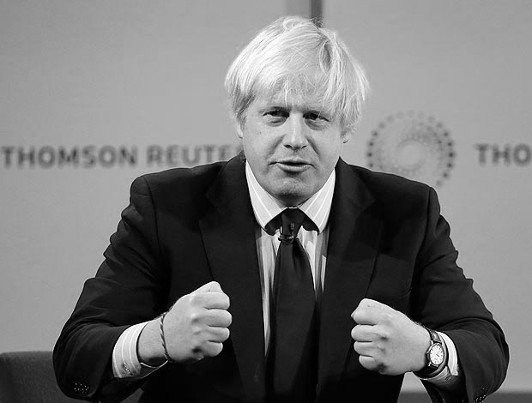 Conservative Home yesterday released the latest results of the regular survey it runs on who should be the next leader of the Conservative Party. The poll derives from a regular focus group of more than a thousand members and so even though the sample is not all that large, it is certainly useful in showing trends.

This is incidentally the same source of opinion that produced the results we quoted on TCW yesterday showing how badly the Chequers ‘deal’ was received by the grass roots both before and after Theresa May’s summer schmoozing offensive. It’s worth reproducing again because of how it relates to the new data. 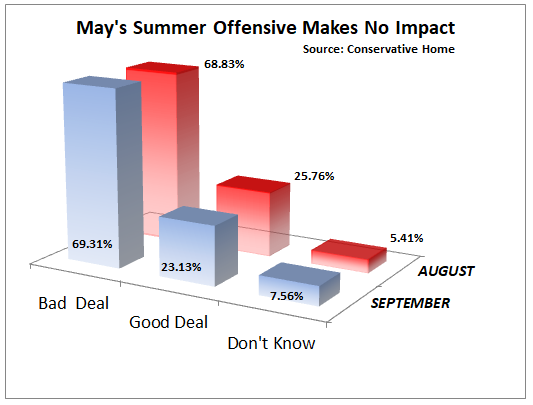 Conservative members have proved wonderfully resistant to the reassurances from May and her party chairman, and have reacted very strongly to the Chequers plan in their preference for who might take over from May, as the new figures show.

Collating the data from the Conservative Home polls in July, August and September we can see the marked impact that Chequers has had on grass root opinion and preferences. 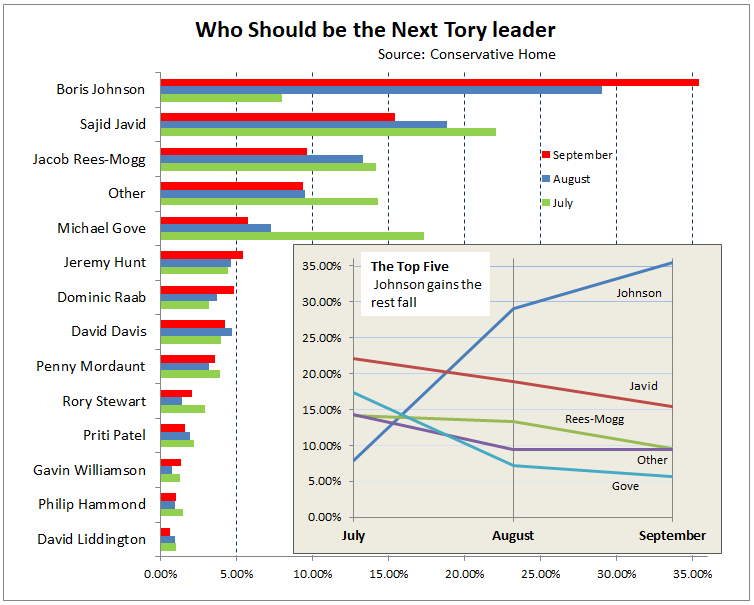 As the membership’s choice for Tory leader to follow Mrs May, in July Boris Johnson, then Foreign Secretary, languished in fifth place with roughly a third of the support of Sajid Javid who led the field and well behind Michael Gove, Jacob Rees-Mogg and ‘other’.

Then came Chequers, the resignations of Davis and Johnson and a resultant pronounced shift in the rankings. The big loser was Gove, the Brexiteer turned May loyalist who swallowed the Chequers proposal. His position collapsed in August from second place to fifth (17.3 per cent to 7.3 per cent). The big winner was Johnson who moved to top place with a whisker over 29 per cent supporting him as May’s successor.

Conservative Home’s latest results show Johnson extending his lead still further, at 35 per cent outdistancing second placed Javid on 15 per cent by a clear 20 percentage points. Among the Remainers in cabinet, Hammond and Lidington see their support dwindling from a very low base in July to less than 1 per cent each by today. Only Jeremy Hunt sees his modest score improve over the three-month period to end up at less than 6 per cent.

In a leadership contest, should there be one in the near future, it ought to be hard for Tory MPs not to allow Johnson’s name to be one of the two that go through to the membership for the final choice of successor to May.