NewsPaperthe art of publishing
HomeNewsIn trade talks, we hold just as many cards as the EU
0

In trade talks, we hold just as many cards as the EU 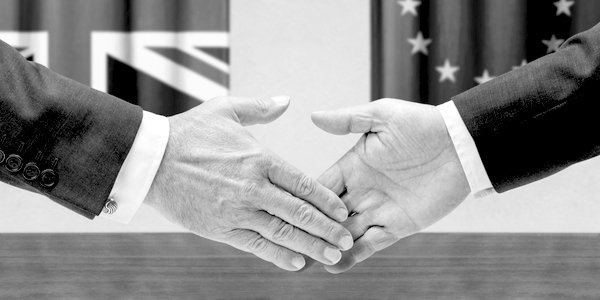 OVER the past few weeks, we have been seen various threats and bluster from EU personnel and politicians. Sadly, this can be expected to continue for the next few months as the negotiations begin for the new UK-EU trade relationship.

Following Brexit Day, better late than never, the UK, of course, moved into the transition period, during which we remain subject to the EU’s rules and regulations. There is little doubt this will end by the end of this year – it is enshrined in British law – so the new UK-EU trade relationship, deal or ‘no deal’, will begin on 1 January 2021.

This week’s speeches by the Prime Minister, batting for the UK, and Commission chief negotiator Michel Barnier, batting for the EU, have been instructive. Suffice to say at this point, there are significant differences in their approaches to the forthcoming trade negotiations.

The Prime Minister’s Greenwich speech on 3 February made it perfectly clear that his preferred UK-EU trade outcome was a ‘Canada-style’ free trade agreement (FTA). This does not, however, mean replicating Canada’s Comprehensive Economic and Trade agreement (CETA) with the EU. Critics have been quick to point out that CETA, for example, retains a few tariffs and some quotas. This is not the point. The phrase a ‘Canada-style’ deal should be seen as shorthand for a straightforward bespoke FTA, out of the Single Market, out of the Customs Union and with ‘zero tariffs, zero quotas’, very loosely modelled on CETA. (Note that tariffs apply only to goods, not to services.)

Crucially, the Government has ruled out wide-ranging regulatory alignment, though, of course, UK exporters to the EU will have to continue complying with EU product regulations (and vice versa), as UK exporters to non-EU countries have to comply with the product regulations of those non-EU countries (and vice versa). The EU’s ‘level playing field’ approach, more on which below, was robustly rejected.

The PM said little in his speech about the trade in services, including vital financial services. However, in a written statement also of 3 February, he did state that the eventual trade deal ‘should require both sides to provide a predictable, transparent, and business-friendly environment for financial services firms, ensuring financial stability and providing certainty for both business and regulatory authorities’. In addition, he said ‘there should also be enhanced provision for regulatory and supervisory co-operation arrangements with the EU, and for the structured withdrawal of equivalence findings’. In other words, the Government is aiming for an ‘enhanced equivalence’ regime, in which regulations, albeit different, are mutually accepted as ‘equivalent’. Whilst the EU’s ‘equivalence’ regime can be withdrawn at short notice and, therefore, provides little stability (and is limited and patchy), the PM’s ’enhanced equivalence’ regime aims to provide stability for financial services.

Boris Johnson also referred to the possibility of an outcome ‘more like Australia’s’ as the default if the ‘Canada-style’ deal fails to be agreed in the forthcoming negotiations. Suffice to say, the EU does not have a free trade deal with Australia. An EU-Australia Partnership Framework was agreed in 2008, which reduced barriers to trade, but it was not an FTA. Trading on a similar basis to Australia would, therefore, be very similar to trading under WTO rules. In other words, the UK would leave with no trade deal in place. However, as I pointed out in an article for The Conservative Woman last year, this would be far from a disastrous outcome.

Michel Barnier was also speaking on 3 February, in Brussels, to coincide with European Commission’s recommendation to the Council of the European Union to ‘authorise the opening of negotiations for a new partnership with the UK’.  A Council meeting is scheduled for 25 February, when it is expected the Council will agree to the recommendation. UK-EU trade negotiations are then expected to start in March.

To be brief, the EU has in principle agreed to negotiate a ‘zero tariff, zero quota’ FTA, though with some very controversial strings attached. These strings include, firstly and perhaps most significantly, the EU’s insistence on maintaining the aforementioned ‘level playing field’, so the UK does ‘not undercut the EU’. The Commission released slides in January on the ‘level playing field’ which noted ‘the aim should be to prevent unfair competitive advantage that the UK could enjoy through undercutting of levels of protection with respect to, inter alia, competition and state aid, tax, social, environment and regulatory measures and practices’. The ‘level playing field’, therefore, covers a great swathe of regulations affecting the relative competitiveness of British business, and has been rightly rejected by the UK.

Secondly, the EU has made it clear that any trade deal is ‘inextricably linked’ with agreement on continued EU fishing rights in UK waters. The PM has suggested that an agreement on fisheries may be considered, but has emphasised the UK’s status as an independent coastal state after the transition period. Post-Brexit UK, as an independent state, will own its 200-mile maritime economic exclusion zone (EEZ) and the fish in it, under the UN Convention of the Law of the Sea. Thirdly, whilst the PM has said the UK will not accept any role for the European Court of Justice (ECJ), the EU wishes the ECJ to have the final say on any interpretation of EU law.

There are, therefore, several tough issues to be resolved if an FTA is to be agreed by the end of 2020. But who holds the cards? There are certainly voices in both the EU and, disgracefully, in the UK, implying that the UK is an isolated little country that should, by implication, act as a supplicant in these negotiations and hope that the mighty EU will bestow its favours. This misses several rather crucial points.

Firstly, the UK is not an isolated little country. Rightly, the Government is pressing ahead developing trade agreements with the US and Japan as well as key Commonwealth countries, namely Australia, New Zealand and Canada. The UK has extensive international links and to paint the country as a new-style North Korea because of Brexit is beyond absurd. The UK, moreover, is not a small economy by any means. In 2018 it was still the world’s fifth-largest (in US dollar terms), just larger than France.

Secondly, we have an enormous trade deficit, especially in goods, with the EU. Our overall trade deficit was £66.4billion in 2018, of which the goods deficit was £94.3billion, only partly offset by the services surplus of £27.9billion. (Our goods deficit with Germany alone was £28.6billion in 2018.) By contrast, the UK had an overall trade surplus of £28.7billion with non-EU countries. Given the EU’s enormous goods surplus, they really would be cutting off their nose to spite their face if they spurned the opportunity to agree a free trade agreement, even if it meant compromising on the ‘level playing field’. I would, moreover, expect this basic truth to have resonance with the Commission, imbued as it is with the mysteries and the greater ideals of the EU, as it surely has with Germany’s car exporters and France’s wine exporters. Pragmatism will surely have a place in the negotiations.

Following on from the observation that non-EU trade is growing more quickly than EU trade, it is clear that the share of our exports going to EU markets is in decline, reflecting the EU’s relatively slow growth. Nearly 50 per cent of our exports (goods and services) went to EU destinations in 2008; this had fallen to 45 per cent by 2018. This decline can only be expected to continue, given the EU’s sluggish prospects. UK trade is already aligning with the fast-growing parts of the world economy, the growth markets of the future, and Brexit-enabling trade agreements will surely hasten the alignment. This is to Britain’s benefit.

Finally, on financial services, it should go without saying that EU clients benefit from London’s financial markets – otherwise they simply would not trade with London – and doubtless will wish to continue benefiting from London’s financial markets. Interestingly, the outgoing Governor of the Bank of England, Mark Carney, commented more than three years ago: ‘These [trading] activities are crucial for firms in the European real economy and it’s absolutely in the interests of the EU that there is an orderly transition and that there is continual access to those services’. He could not have expressed it better.

So, who does hold the cards? The simple answer is that both the UK and the EU do. It is clearly in the EU’s interests to agree to a ‘zero tariff, zero quota’ FTA with the UK in order for their trade surplus to thrive, not least of all because the Eurozone’s large economies are all looking a little peaky at the moment. It is, moreover, in our exporters’ interests to continue trading with the EU with a deal – the EU remains an important, albeit declining, export market.

Let us, however, put to bed once and for all the ludicrous notion that we are the weaker partner in these negotiations. It quite simply is not true. And EU people, please stop the threats and the bluster. It does not help your cause and I suspect few people are impressed.