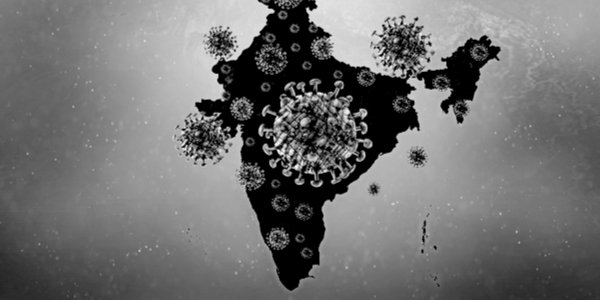 HARRY Dougherty, writing in The Conservative Woman, is right when he points out that while the media paints a gruesome picture of Covid in India, overall the death rate is surprisingly low.

However, the real story lies not in the number of deaths but the suddenness with which they have occurred.

In order to understand the significance of this rise we need first to understand that a densely populated country, with poor access to health care facilities and low levels of sanitation and hygiene has until very recently had some of the lowest Covid death rates of anywhere in the world.

A range of explanations was put forward to account for this.  Some suggested that it was because the measures of mask wearing and hand washing had been so rigorously applied. Others suggested that heat and humidity made coronaviruses less active.  One particularly convincing explanation suggested that in order to survive their country’s many diseases and widespread lack of access to clean drinking water, Indians have strong immune systems.

Some of these explanations appear credible which makes the sudden increase all the more alarming. Commentators have been looking for explanations without much success.

However there has been one area which has not been considered: the treatments India adopted for Covid-19.

From early on in the ‘pandemic’ India used first hydroxychloroquine then ivermectin, medicines which had been discouraged or banned from use in large swathes of the world.

Indians were very experienced in the use of the anti-malarial hydroxychloroquine and when numerous studies proved its efficacy as a treatment for Covid-19 they put it to very good use.

For example, as early as March the Indian Council of Medical Research under the Ministry of Health and Family Welfare recommended the prophylactic use of hydroxychloroquine among asymptomatic health-care workers treating patients.

Covid Care Centres played a critical role in keeping covid cases down in north eastern states through the distribution of hydroxychloroquine tablets.

A similar story played out with ivermectin. Even safer and more effective, it can be used at all stages of treatment and is another cheap, well-established repurposed drug. Dr Pierre Kory of the Front Line Covid-19 Critical Care Alliance explained that ivermectin, a Nobel Prize-winning anti-parasitic agent, was able to obliterate transmission of the virus, with ‘miraculous’ effectiveness and that it had been the subject of dozens of studies.

India listened to Dr Kory and established a home Covid kit with zinc, doxycycline and ivermectin which cost $2.65 per person.

Following this discovery it was adopted in place of hydroxychloroquine in some of India’s largest states. By the end of 2020 Uttar Pradesh, which had distributed free ivermectin for home care, had the second lowest fatality rate in India.

However, on January 15 2021 India followed the West in its decision to roll out vaccines. Two weeks later covid infections started to rise.

Some of the states which had the highest number of vaccine doses administered, such as Maharashtra, Karnataka and Tamil Nadu, were shortly afterwards reported to also have very high levels of infections. This was followed by the precipitous spike in death rates. Was there a connection?

The sudden rise in deaths following the introduction of the vaccine in Gibraltar, reported in The Conservative Woman, should also have sounded an alarm.

There was an alarming spike amongst the vaccinated in Israel following the introduction of the vaccinations.  And, tellingly, just as Covid infections spiked in Israel the rate in unvaccinated Palestine went down.

Mechanisms have been identified which could contribute to an increase in infections and deaths following the vaccine. One suggestion is that people contract the infection while waiting for their vaccination. This could be particularly dangerous because the vaccine was not developed to reduce infection, but rather to prevent symptoms. This means if people become infected while waiting for the vaccine they could spread it to others without becoming ill themselves. A symptomless infection could be particularly dangerous in a densely populated country like India for helping to spread the disease.

A post vaccination fall in lymphocytes and neutrophils has also been documented which could leave a person more vulnerable to post vaccine infection, as Claire Craig explains in the BMJ.  This could help account for the spike in deaths particularly among the elderly which has been documented in a number of countries including the UK and Denmark.

One feature of the vaccine trials was that the key exclusion criteria included a medical history of Covid -19; that is they specifically avoided people who had already had Covid-19, and could therefore be assumed to have pre-existing antibodies.

We know from a survey of the Indian Council of Medical Research (ICMR) that 21.4 per cent of 28,589 people surveyed above 18 years of age showed exposure to the virus. This suggests India already has high levels of herd immunity. Nurses and doctors were found to have a sero-prevalence of nearly 27 per cent. It may be that injecting a population which already has high existing immunity could produce more adverse reactions.

Another possible explanation for the increase in infections comes from vaccine expert Geert Vanden Bossche. In recent weeks his highly emotive letter where he begged for vaccines to be stopped immediately was circulated off the mainstream media.

Vanden Bossche claimed that introducing a vaccine in a pandemic situation hugely increased the opportunities for viral escape which would result in mutations far more deadly than the original virus.

While his theories were roundly criticised the rapid emergence of India’s own fast spreading and apparently more lethal home-grown variant would have been predicted by his theory.

And in the meantime what has happened to India’s treatments of choice? According to the BBC it is now Remdesivir which India is being encouraged to manufacture, despite being significantly less efficacious than ivermectin. The other drug now being touted in India is Tocilizumab which also has a considerably lower rate of efficacy, and where ivermectin costs $2.65 Tocilizumab costs £500.

Journalists are using the situation in India to promote what the MSM-reading public have come to think of as ‘the life-saving vaccine’.

Peter Beaumont in the Guardian tells us that those who remain unvaccinated are ‘a powerful threat, able to overwhelm health systems‘.  In the Telegraph, Rigby and Newey tell us that ‘everywhere remains vulnerable until vaccinated’.

There has been a vigorous programme of censorship which has made it impossible for medical experts to publish anything which counters the pro-vaccine narrative on the mainstream media.

Without an absolutely open and transparent discussion about the vaccine which gives all those with expertise a place at the table we cannot be confident about its purported benefits. And until this happens there should be a great deal more hesitancy about administering it.

Otherwise, far from helping India, it could be that the vaccine is contributing to this disastrous result.